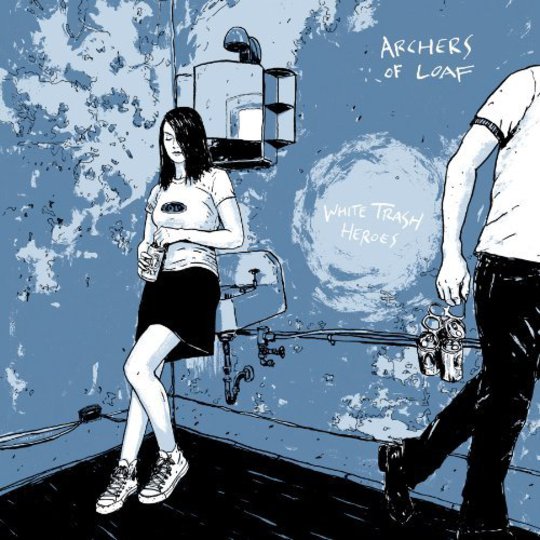 White Trash Heroes is probably Archers of Loaf's best album. It was the biggest diversion, a large step away from their past three efforts. When the All The Nations Airports tour cycle had finished the band had choices to make and no great real desire to make them, but they knew they wanted to carry one for one more album and that it needed a different approach.

So it was a mix up, with band members even changing instruments on occasions and programmed keyboards used to flesh out the sound. Eric Bachmann seemed to pitch his vocals in a higher register for the bulk of the album. The record thrashed and flashed quickly, from the excellent Hüsker Dü-styled guitar walls of ‘Fashion Bleeds’ to the exasperated nihilistic romance of ‘In Perfect Time’, ten tracks fly by (except the hulking title tune).

As an album without any compass points, it matches their debut for free spirit and fearlessness, partly because - unlike the disappointed All the Nations Airports - there's a liberating sense of acceptance that the big time was not beckoning. What makes White Trash Heroes stand out is the focus in each track, sonically. ‘I.N.S’ hit the whammy bar with the ferocity of MBV and Bachmann’s vocals are super dirty, the chorus a punk anthem with no discernable words – the chaos is perfect. ‘Slick Tricks and Bright Lights’ contrasts a blues rhythm with falsetto and bursts of pure bluster. It sounds like The White Stripes before The White Stripes was to surface, with a chorus more tender than anything Jack ever fashioned as Bachmann croons “I don’t understand, how you got the upper hand… on me”.

‘Smokers In Love’ is maybe the chink in the album but its interplay with the following track is inspired. It’s an instrumental that clunks with the bass lines of a Primus track at points, but is led by an e-bowed guitar that has a certain sense of melancholy. But as ‘After The Last Laugh’ kicks in, the e-bow guitar from the previous track follows in tow and the tie together is massively rewarding. The mix of raucous, shouting choruses and a simple, delicate, chord descent is gorgeous.

The album’s title track and closest is one of the finest tracks the band recorded, rattling like a fight through the streets. Bachmann sounds as delicate as he ever has, akin to the gentle gruffness of Tom Waits. Sirens whistle continuously like a train journey as the white trash heroes are celebrated (“Dreaming of the white trash heroes/I’m in paradise”). It closes with a fanfare of the once more resurgent bowing guitars, playing the lead melody, as it peters out for over a minute it feels like a genuine farewell, something cast to sea or set alight to burn, there’s complete tranquillity in the conclusion.

Archers Of Loaf are a fantastic band whose four full-lengths will undoubtedly have a lasting impact, none more deeply as an album than White Trash Heroes, even if its predecessors may provide the singles that initially generate hysteria. Though the band continue to play shows today there are still, currently, no plans to record. It feels like the band are playing because they can and if their live shows are motivated by the same shoulder-shrug carelessness of White Trash Heroes then those shows should be seen: it’s rare to hear abandon sound so good.