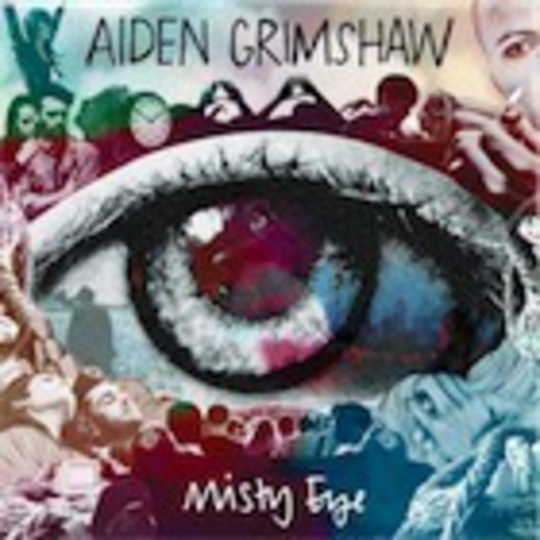 Remember this? It's quite possible Aiden Grimshaw would rather not be reminded of his time on a certain television reality show, although it's fair to say without that exposure we probably wouldn't be sat here talking about his new record either. As a contestant on The X Factor in 2010, Grimshaw lasted six weeks, that year's show spawning the likes of One Direction, Cher Lloyd and arguably the worst vocalist to ever appear on a so-called talent show, Wagner. While it would have been easier to just fade into obscurity, Grimshaw relocated to London from his native Blackpool, armed with a batch of ideas for songs. It wasn't long before the contacts he'd established through The X Factor saw him team up with a host of writers and producers, and two years later, Misty Eye is here.

Of course it could also be argued that his low placing on UK television's biggest talent show was a blessing in disguise. Indeed, as that performance of 'Mad World' demonstrates - along with some of Grimshaw's other 'best moments' - he was never really cut out to be one of Simon Cowell's all-singing, all-dancing pop puppets. Sure, Misty Eye is a pop record in the strictest sense of the word, but at the same time it's difficult to envisage the symphonic title track or beat-laden 'This Island' receiving the karaoke treatment any time soon.

Employing Lana Del Rey collaborator Jarrad Rogers on co-writing and production duties here was something of a masterstroke on the part of both Grimshaw and his label. While Misty Eye is far from perfect; there are times when it strays into Reality Killed The Video Star era Robbie Williams, or worse, Olly Murs territories; but when it raises its head above the slapdash parapet of stereotypical processed pop it soars. "Hold on to your stars before they fade" sings an apprehensive Grimshaw on opener 'Hold On', while Rogers production employs all kinds of beats and effects to lift it out of the predictability quagmire. The baggy tinged 'This Island' manages to combine all kinds of genres with a disparate vocal set to maudlin lyrics ("You used to love me") exquisitely delivered by Grimshaw's flawless oh-so-serious vocal.

Athlete's Joel Pott and Steve Rushton - formerly in Busted off-shoot Son Of Dork - also make cameos as co-writers here. Pott's contribution, the Alex Clare-like 'Is This Love' falls under the weight of its own expectation trying to catch the dubstep gravy train. Rushton's efforts veer between the sublime reflective tones of the orchestral title track and atmospheric lament 'Poacher's Timing', to the closing number 'Curtain Call', which briefly strays into Williams territory via Andreas Johnson's (remember him?) 1999 hit 'Glorious'.

At times Misty Eye tries to be too clever for its own good, as on 'What We Gonna Be', where Grimshaw and guest rapper Smiler go for a similar vibe to Tinie Tempah and Eric Turner on their 2010 collaboration 'Written In The Stars' but end up falling flat on their faces. Grimshaw's subdued take on Sia's 'Breathe Me' also suffers from piano-ballad-by-numbers syndrome, while self-referential slowie 'Be Myself' wins first prize for stating the bleedin' obvious ("I gotta be myself, no one else...").

However, credit where credit's due. Misty Eye won't go down as a record crammed with pop classics, but considering where its creator came from, and in comparison to the offerings of his fellow competitors also fortunate enough to be awarded recording contracts, Aiden Grimshaw can be pretty pleased with his lot.