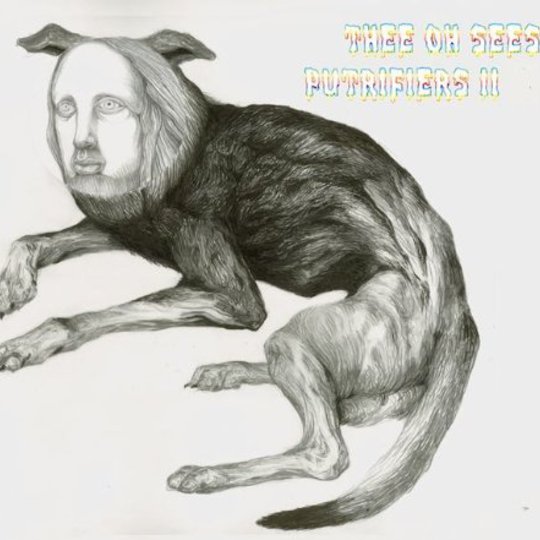 One constant throughout Thee Oh Sees' 15-year-career is that you never quite know what to expect next. Whether veering between psychedelic surf pop, discordant folk or all out garage rock, there's something distinctly unique about John Dwyer's exceptionally prolific combo.

With major emphasis being placed on the phrase 'exceptionally prolific'; Putrifiers II is actually Thee Oh Sees' fourteenth album, if one is to combine their various guises and line-ups. What's more, it's also their first to swim quite freely between each and every genre they've embraced since Dwyer started the project initially as an outlet for his own experimental musings. Last year the band put out two albums in the space of six months, May's Castlemania perhaps more in keeping with the traditional two-and-a-half minute punk blasts Dwyer spits out in his sleep, followed by Carrion Crawler/The Dream in November, which referenced the more whimsical elements of late Sixties/early Seventies psychedelia.

It shouldn't come as too much of a shock then that Putrifiers II hedges its bets down both routes, coming up trumps by channeling the best of each into ten gloriously frazzled pieces. Currently operating as a five-piece - whereas previously Dwyer would think nothing of recording an album alone before recruiting members purely for the purpose of playing live - Putrifiers II is clearly a collaborative effort, and all the more delightful as a result.

Opener 'Wax Face' sprints off towards more familiar territories; think No Age playing Cream's 'Sunshine Of Your Love' in the style of Hawkwind and you're not far off. Dwyer's distorted vocals coupled with a raucously intense, semi-repetitive three chord melody that sets the scene intently for what follows. It's difficult to find an artist The Beach Boys haven't influenced, and if there was any doubt beforehand, Thee Oh Sees name can be added to the list of devotees to team Love, Wilson, Jardine et al. 'Hang A Picture' swaps the West Coast waves for the desert at the change of a verse, once more highlighting Thee Oh Sees versatility. 'So Nice' also dips its toe into folkier waters, Lars Finberg's menacing violin providing a sinister overture to the song's mellifluous death rattle.

As the one minute and 45 seconds long interlude 'Cloud #1' acts as a hallucinatory bridge between 'So Nice' and the awkward blues of 'Flood's New Light', which sounds like a lo-fi Rolling Stones transported through a pre-Beggars Banquet timewarp. The album's undisputed opus also doubles up as its title track. Clocking in at just over six minutes, 'Putrifiers II' - the song - switches between dark sludge rock and a devilish fervour to recreate The Shangri-Las' 'Leader Of The Pack' in a San Francisco garage played by obsessive music historians. "Don't be sour!" spits Dwyer before the second half erupts in what can best be described as a slow burning mental breakdown as depicted in musical form.

Elsewhere, 'Will We Be Scared?' and 'Lupine Dominus' reveal the band's dramatic side, the former mixing doo wop backing vocals with slacker sensibilities while the latter sounds like a blueprint for the T2K Pebbles compilation revival, where there to be one. 'Goodbye Baby' could be The Posies or Beachwood Sparks were it not for John Dwyer's unmistakable yowl. Ending with what sounds like a helicopter preparing to take off, it would be a fitting climax for most long players but only adds to the diversity here. And then, just when we least expect it (again), out pops the ghost of Syd Barrett on haunting closer 'Wicked Park'.

Word on the street is plans are already well under way for Thee Oh Sees' fifteenth album. Whether or not that be the case, they can rest assured safe in the knowledge Putrifiers II ranks highly alongside their best.