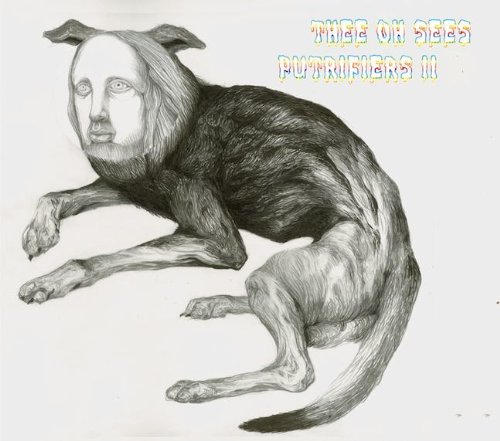 One constant throughout Thee Oh Sees' 15-year-career is that you never quite know what to expect next.»

thee oh sees have progressed from main man john dwyer's noise punk roots in coachwhips and pink and brown into a sprawling beast that hoovers up psychedelic, garage, acid-streaked rock, and even battered folk influences. if one prefers a slightly more subtle musical awakening, there's always putrifiers ii, the latest in a long line of oh sees albums that expands the group's sound well past your friendly neighborhood garage band. so while the space-odyssey nods of 'wax face' actually sound like they're meant to melt one's ears straight off, the record's full of deviant detours, from the poison-tipped string parts and eno-esque engineering of so nice' to the groove-locked krautrock inclinations of 'lupine dominus.' the most noticeable element may be dwyer's melodies, however, as they reveal a softer side to his songwriting, one that makes perfect sense considering just how disparate his dust-clearing influences are. scott walker, the velvet underground, the zombies and the experimental japanese act les rallizes denudes are but a small taste of what informed thee oh sees this time around, as dwyer returned to the multi-instrumental ways of castlemania's full-band sessions. rounded out a fuller, drier sound with drummer / engineer chris woodhouse and special guests like mikal cronin (sax), heidi maureen alexander (trumpet, vocals) and k dylan edrich (viola).
description from www.roughtrade.ocm