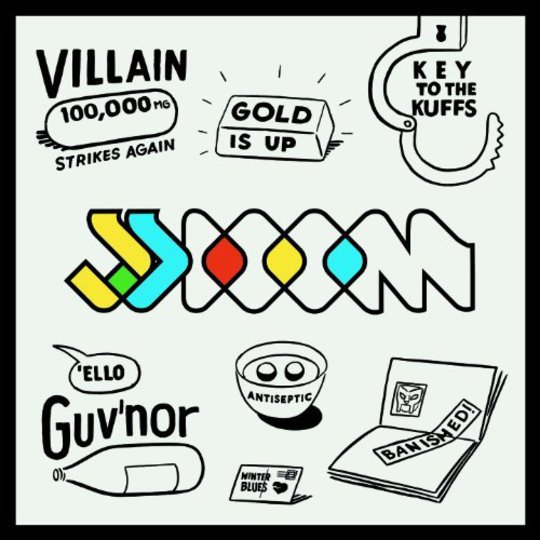 Truth is, the more we learn about the JJ DOOM mainman - best known for a) wearing a cool mask, b) rolling exemplary L-skins, and c) sending ‘DOOMpostors’ to take the stage and mime along at his headline shows - the more it transpires he’s perhaps a bit of an arsehole. Time was when the syntax gymnast’s verses spoke for themselves and none of that figured. Take a song like 2009’s ‘Gazillion Ear’, his manifesto ringing loud and loquacious: to provide original, financially-demotivated music in a world of greedy bankers, and worse, bad rappers.

Nowadays putting the rhymes before the crimes is slightly problematic. Conning fans out of paid-for live shows isn’t the sign of a performer atop his game, regardless of villainous alter-egos. What doesn’t help is a faintly useless lyric such as the following, found on one of the snoozier cuts from Key to the Kuffs, ‘Borin’ Convo’:

“The Supervillain get kicked out your country

And said the pledge of allegiance six times monthly

He ain’t hardly go to school

As an album track it’s hardly end-of-days awful, but it remains a slightly stale take on DOOM’s consistently rewarding Supervillain persona. Better is ‘Retarded Fren’, a rattling, helter-skelter journey through the twisting back-alleys of his planetary ego. But alarm bells ring when the most you can say for mid-album psycho-dirge ‘Dawg Friendly’ is 'nice outro'.

So cushioned is the impact that, at times, Key to the Kuffs sounds less like a career on autopilot than a Phineas Gage-like feat of survival; trademark ticks and tricks arranged into place, albeit with all the waning passion of a frontal lobotomy patient. Frequently you find that the timing lacks oomph; the sentiments are recycled; and occasionally the technique, so reliably gawp-inducing on MM FOOD and Madvillainy - the mad, unpredictable flow of water shooting back up Niagara - sputters and spurts like the leaky tap in a ghetto retirement community.

Jarel’s role in all this is to background his dense, FX-laden and bass-driven psych-outs; wonky electronica’s hyperactivity translated to a language compatible with tightly-woven rhymes. Perfectly on-brief is ‘Banished’, a thundering fucker that swerves in and out of Dumile’s gruff diatribe like a traffic-dodging Need for Speed mastermind. Songs like ‘Guv’nor’ and ‘Wash Your Hands’ are peerless - the latter parodies hook-laden hip-pop, detailing a hygiene OCD experienced at a pool party before brandishing an extraordinary payoff involving an attractive’s “camel-toe”. Both show DOOM at his showboating best: one-liners cascading into labyrinthine rhyme patterns, equal parts esoteric wordplay and startling lucidity, and calling into question the value of linear logic, at least in rap music, before snaring short attention spans with elegant braggadocio.

He’ll conquer and destroy the rap world, like the white man” - ‘Guv’nor’

The rub, then, is not that Key to the Kuffs is a bad album, but rather one that stumbles through an abundance of unspectacular moments. What’s to say about Beth Gibbons’ appearance on ‘GMO’? Slight, spectral, sharp. Not a great deal, in truth, besides the fact its wisp-thin whimper hits harder than Damon Albarn’s seven-syllable cameo on ‘Bite the Thong’.

After three years’ waiting amid rumours of that Madvillainy follow-up, you might express gratitude for any new material the generous old man deigns to offer us, but rap paradise is paved with bad intentions and Key to the Kuffs disappoints by shying away from greatness where we’ve come to expect nothing less. “They need to get they thumbs out they rears / And show some skills the one time they come out in years / Instead of dumbin’ out in fears of they own shadows,” DOOM rapped of lazy emcees on Dabrye’s ‘Air’, in 2006. Scarcely less than indispensable, now’s time for rap’s finest wordsmith to rediscover the flame-headed courage of his convictions.