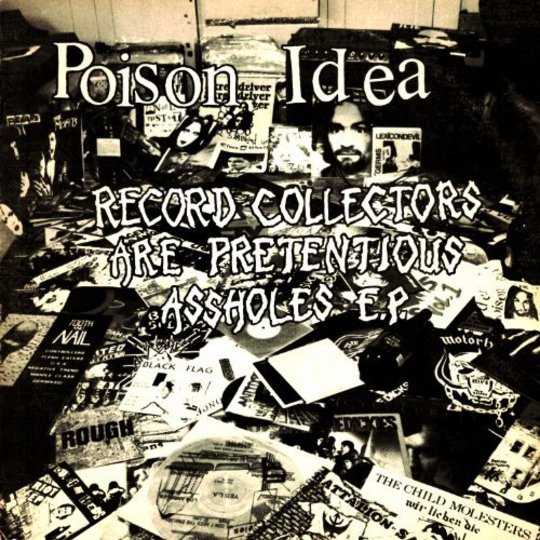 Who are Poison Idea? For the uninitiated, they're a Portland-based hardcore group who were contemporaries of luminaries such as Black Flag, the Germs and Discharge, and a major influence on groups such as Turbonegro, Pantera, Napalm Death, Machine Head and some lot called Nirvana. Poison Idea have a had an on/off history, with its core line-up splitting and reforming repeatedly until 2006, when guitarist Tom 'Pig Champion' Roberts died. Singer Jerry A is still leading a version of the band, but he's the only member remaining from the original lineup.

The Fatal Erection Years is the second release in a series of reissues by Southern Lord, and brings together Poison Idea's first two releases: the 1983 7-inch EP Pick Your King and the Record Collectors Are Pretentious Assholes 12-inch from 1984, along with four compilation tracks from the period. If that's not all, there's a 19-song live set from 1983 also thrown in, alongside copious liner notes from Jerry A. That's 45 tracks of hardcore goodness, lasting all of one hour of power.

Pick Your King, so called because of the double-sided sleeve featuring Elvis on one side and Jesus on the other, is a fairly impressive - even by Eighties hardcore standards - 13 songs in 12 minutes. Don't expect any surprises: these tracks are about as straight and furious as hardcore gets. They're rough, sure, but even 30 years later they're still really fucking good, thanks in no small part to Pig Champion's relentless riffing. Stand out tracks - although it's hard to pick - are 'This Thing Called Progress', 'Self Abuse', 'Pure Hate' and '(I Hate) Reggae'.

Record Collectors are Pretentious Assholes continues the assault, but with roughly three per cent more sophistication. After all, it does push the 13-minute mark. Also, although we're still firmly in hardcore territory, we've got a smidgen of ebb and and touch of flow as opposed to all-out attack. The production's a little tighter, the songs more cohesive: it's the clear sound of a band developing their own unique approach. Standout tracks from this part of the saga? Opener 'AA', the degenerate mess of 'Cold Comfort', the pretty-fucking-close-to-post-punk 'Thorn in my Side' and 'The Rich get Richer'.

By the time you get to the four compilation tracks, you could be forgiven for a bit of hardcore fatigue. Luckily, then, these four are almost soothing compared to the previous 25 minutes of music. Songs like 'Laughing Boy' and 'Die on Your Knees' show Poison Idea are clearly moving on here - even into the sphere of three-minute tunes.

Last but not least, the live set is messy as all hell. While Southern Lord have clearly done their best to clean up the acoustics, it's still pretty bad by modern standards - and by the standards of many bootlegs. Still, it gives you a great snapshot of the punk scene of the early Eighties - the aggression (often between band and audience), the breathless anarchy, the sheer energy. There are a few musical gems too, with a nice little pisstake of slam dancers called 'Slam Dance Jam', the glorious madness that is 'My Hard-on Withers in Your Face', and the triptych of 'Bounce the Rubble', 'All Right' and a slovenly cover of 'Louie Louie'.

Does this hang together as a single piece of work? It does, but it's almost overwhelming in one go. It's worth taking it in pieces - at the very least taking the recorded work and the live set separately. Even so, The Fatal Erection Years is a fascinating retrospective into the development of a hugely influential band's sound. Over and above that, it's a clean and pure blast of hardcore punk that sounds like it could have been written yesterday. A fine piece of ephemera to add to any pretentious asshole's collection.