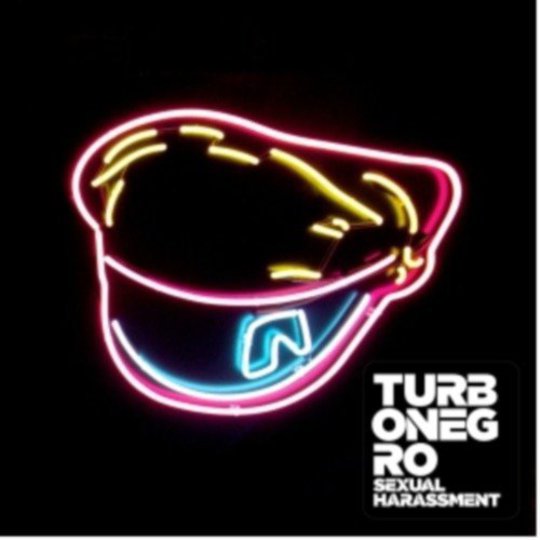 It’s one thing for a band to make a comeback, or indeed more than one, against the odds. There tends to be the added challenge of doing so in a dignified manner, and not coming off like an ex-pro wrestler taking stapleguns to his unfeeling forehead in a church hall for minimum wage. Turbonegro, while not exactly acting with ‘dignity’ as Simon Heffer might define the word, have generally done a good job of getting to their feet after a setback. God knows they’ve had enough practice: members have suffered (and recovered) from Hodgkin’s disease and heroin addiction, while three members have left between their seventh album, 2007’s Retox, and Sexual Harassment, their eighth. Tony Sylvester, vocalist on these ten songs, is the fourth frontman of Turbonegro’s 23-year lifespan.

Of course, if you’re at all au fait with this ribald Norwegian ensemble, you’ll know that Sylvester is only filling one relevant pair of shoes here, those of Hank von Helvete. Joining the band in the mid-Nineties, his presence on the mic for Ass Cobra and Apocalypse Dudes – their two best albums, about which you’ll encounter almost no debate – transformed Turbonegro from a provocative garage punk act into actual rock iconoclasts. Hank’s growing smack dependency, for it was he, broke up the band for three years, but they returned in 2002 to find their fanbase had proliferated. Matters stayed on an even enough keel through three more albums, until Hank left in 2010, ostensibly to pursue a ‘clean’ lifestyle (under the wing of a Scientology-affiliated rehab program, which some might say makes heroin seem a preferable lifestyle choice). Sylvester, who debuted with Turbonegro just over a year ago, was a long-term fan and associate: it’s not quite Ripper Owens joining Judas Priest from a Priest tribute band, but rest assured that the new singer is a keen student of his predecessor.

Starting somewhat afresh, then, this is Turbonegro’s most consistently punk-sounding record for quite some time. Quite possibly since Ass Cobra, in fact. Produced by alt-rock man of many projects Matt Sweeney, solos are indulgently metallic for the most part, and New York Dolls-style electric piano bolsters songs with New York Dolls-style titles like ‘Shake Your Shit Machine’ and ‘Tight Jeans, Loose Leash’. Sylvester’s vocals have a post-Lemmy rasp with an unreservedly English twang – in Turbonegro he’s been dubbed The Duke Of Nothing, after one of his ex-bands, and sports a bowler hat. Hank’s thick Norwegian slur is missed, of course, but Sylvester’s hardly going to be oblivious to that, and as it goes he sounds devilishly fit for purpose.

Almost none of Sexual Harassment’s songs are about anything as such, but that’s not the purpose of Turbonegro lyrics. We’re here for stuff that makes you want to sing along while stifling a giggle, and in the case of “From the Himalayas to the Dolomites / From the trilobites to the sodomites,” (‘Dude…’ again), and ‘TNA (The Nihilistic Army)’’s “Why don’t you buy one of those self-help books? / I can’t read! / Why don’t you just go and slash your wrists? / I don’t bleed!” this arrives in heaped portions.

Rock culture references and outright lyrical lifts, which no other band outside of Half Man Half Biscuit has delivered with such zeal and frequency, remain pleasingly abundant on Sexual Harassment. Iggy Pop’s “My my and-a boo hoo” is appropriated for ‘Mister Sister’’s chorus; the hollered backing vocals in ‘TNA’ could only come from people who’ve internalised every second of Black Flag’s Damaged (there’s a song called ‘Rise Below’ later on, too, although it’s by some distance the softest thing on the disc).

Sometimes the rock icons being hailed, albeit more subtly, are Turbonegro. ‘I Got A Knife’ – whose Dictators-via-Angry Samoans stomp opens up the album, much as the knife can “open up a man” – reads like a rewrite of their own ‘Bad Mongo’, from the protagonist’s perspective. ‘Hello Darkness’ (“my old friend”), in addition to the more obvious Simon & Garfunkel nod, carries the secondary message that the band who wrote ‘Are You Ready (For Some Darkness)’ are, to the best of their capabilities, back.

Pleased to say this is backed up by the actual content of Sexual Harassment. It can never be exactly like the old days, when Turbonegro dubbed their music ‘deathpunk’ and were fronted by a man who was probably quite lucky not to die himself – but, again, everyone involved in the project has to know that. (As well as Sylvester, there’s a new drummer on board, Tommy Akerholdt.) There are no outright howlers on the album, really: a few moments that don’t lodge in your head, but hell, even Apocalypse Dudes has those, and there are pockets of fandom that will inform you that’s the best album ever. Certainly, it’s a better place to start for the curious punter than this, but if I tell you it’s ‘for the fans’, that’s a stern encouragement to become one. Once resident in Turbonegro’s world, their worldview will enlighten you.