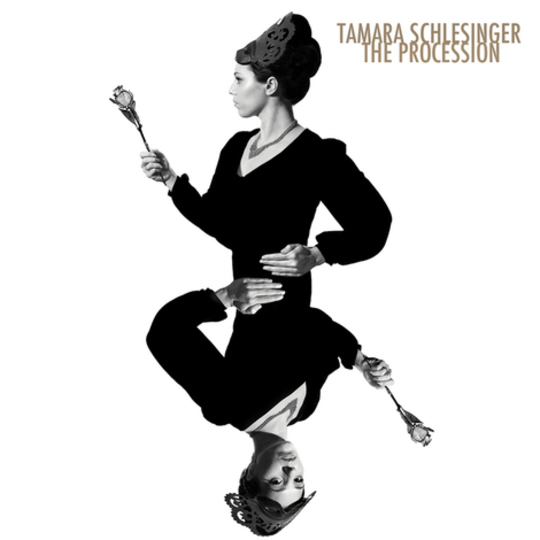 Tamara Schlesinger’s voice is one of the best qualities of 6 Day Riot’s sound, or at the very least, the first which arrests you – its tissue softness easing its way into your ear, with a smooth little hook and a gentle Scottish lilt. So it’s perhaps understandable that Schlesinger felt making a near-as-dammit a capella record was a good idea: an exercise in taking her greatest asset, extenuating it and exploring it in close detail and wide scope. And indeed, opening exercise ‘Yai Yai’ suggests that The Procession is going to be a silky treat indeed – swirling layers of Schlesinger’s irresistible tone sounding about as honey-ish and lacy as you might expect; congealing into a haze of harmony which you can lie on like a mattress.

But a limitation is quickly hit: these pieces rarely make the leap from Schlesinger wondrously exploring the relationship between her own voice and mult-tracking recording equipment, to bona fide songs or worthwhile collages. Early tracks ‘I Go’ and ‘Can You See Me’ make good stabs of turning choral experiments into dreamy song structures, but by the time ‘Again’ and ‘No Coming Back’ unfurl towards the album’s back end, Schlesinger’s half baked melodies and heavy use of repetition are beginning to wear thin, and render a lot of these tracks a little indistinguishable from each other. Rather than creating sharply defined and well drawn compositions, there’s an element of it seeming as if Schlesinger is mainly bedazzled by the sound of a full female choir comprised of her own voice, skipping like a nymph as a backdrop to a soft, sultry harmony with herself.

And who can blame her? It sounds gorgeous, and it’s not something which she’s really afforded the opportunity to do with 6 Day Riot. And there’s another of the biggest compliments you can pay to The Procession: it’s not a 6 Day Riot album, nor could you really even conceive of its being one. To give Schlesinger her due, this is no extraneous repetition of full-band work just to prove that she can go it alone – this is a sincere and legitimate attempt to perform something outside of the parameters of the sound of her ‘main’ project. But there’s the rub: The Procession, far too often, sounds very much like ‘trying something out’ in a self conscious sort of way, and for all its frequently impressive arrangement and sophisticated ornamentation, there’s the feeling of this being primarily experimental and exploratory – a vanity project in an admirable sense of the word, but ultimately still little more than a curiosity piece for both Schlesinger and the listener.