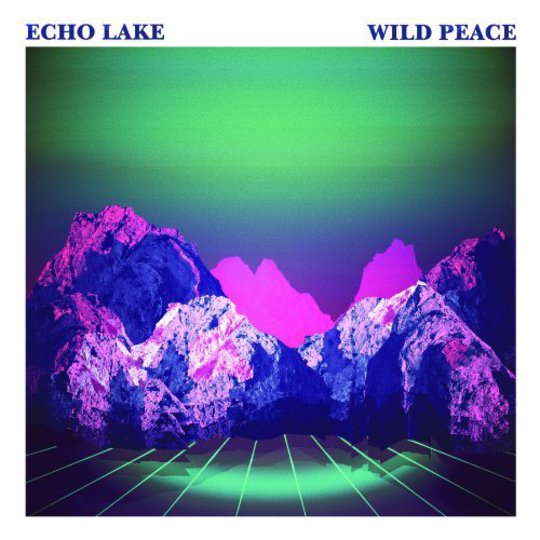 Occasionally, an act existing beneath your radar spins suddenly into your world with something so full of joy, so full of unbridled creativity, and so encrusted with jewels of love and care that you’re simply glad its trajectory broke the surface ripples of your life. And thus it is with Echo Lake’s Wild Peace.

Formed from the South London art-school creative collision of Thom Hill and Linda Jarvis, the duo's debut record shines with a sheen of belief that implies a deep affection for their creations, coupled with an iron will and confidence. In many bands, this combination can too often settle out as a sloppy, unfocused mass; masquerading as 'experimental'. In the case of Wild Peace, the outcome reveals itself as something striking, singular and mercurial; stridently marking out Echo Lake as one of 2012’s most exciting breakthrough acts.

Oh sure, there are lines of influence here. Jarvis’s fallen-choirgirl-in-a-rainstorm vocals may hint at Bilinda Butcher’s softer moments, while the music swirls around with an M83/Beach House dream-state innocence, underscored by the treble and reverb-heavy crunches of Galaxie 500 and The Jesus and Mary Chain (also evident in their clear love of classic Phil Spector/Brian Wilson song arrangements). But that’s where the comparisons need to cease, as they serve little further purpose when considering an album that stands perfectly straight and tall upon its own bedrock. Because despite influences, Echo Lake have an approach that states that the song comes first, and the music complies and dances to the underlying tune. Take, for example, the stunning, standout ‘Last Song of the Year’, which having dazzled in its complex, dense, Sixties girl-band heaven for 90 seconds, suddenly explodes into the sort of neck-arching Les Paul riff that made Definitely Maybe seem so immediate and sky punching in 1994. See, anything goes with Wild Peace. And it is precisely that uniqueness of approach that makes it such a thrilling, individual and continuously rewarding suite of music.

There are so many ideas flitting around the record; so many different element of melody. Like an onion, each subsequent layer reveals more sweetness and succulence underneath, with chord changes abound under the drifting clouds of reverb, fuzz and distortion. But never does it become overwhelming: Hill and Jarvis are intelligent and judicious enough with their pruning to prevent their multitude of ideas strangling the underlying themes. The flowers and fronds bloom, yet the water still runs clear. And it is precisely this careful balance - pivoting between technical talent and the open heart of a songwriter - that compels you to discover more. They let the songs speak. And when they speak, they speak eloquently. The tumbling, swelling minor-chord progressions, cuts, and regretful sleeve-tugs of opener ‘Further Down’. The chiming, nursery-rhyme melodicism and explosive finale of ‘Another Day’. The magnificent title track’s alternate take on The Suburbs' self-aware claim to the bigger stages. The sonic washing-machine whirl of ‘Monday Morning 5AM’. The post-coital comedown of ‘Swimmers’. And then finally, the jangling, slowly unfolding recollections of ‘Just Kids’, coyly holding back until it finally and gloriously explodes into life, carrying the album home in a supernova burst of guitar: as astounding a conclusion as it is fitting to what came before. These are songs for big stages, on bright days, for broken hearts and lovers alike. And the confidence that Echo Lake imbue them with allows them to soar when others would self-consciously crouch in the corner. They believe; the record repays in spades.

Wild Peace serves as a glorious realisation of when a band chooses to stride out and actually DO, rather than just saying 'I should', 'I might' or 'I could'. It is brave, it is bold; it is sharply chiselled and dextrously moulded. And above everything else, it sounds profoundly effortless. In an age where so much is made of authenticity and 'does it sound like this, or this?', Echo Lake sidestep it all by simply having beautiful songs and concocting a sound so dense, heady and intoxicating that comparisons become irrelevant in the bigger picture.

Rarely in the past few years has mist and swirl seemed so gorgeously enticing, mystical and engaging. And as far as shoegaze, dream-pop, distortion and ambience goes, Echo Lake redefine what is possible by taking the simple approach: by which I mean, being a band whose primary motivation is the first-hand creation of real and joyful experiences, rather than simply festooning the bare walls with tacky, gaudy tapestries and waiting aimlessly for the partygoers to arrive and inject life into the sterile surroundings.

Wild Peace sighs and soars; melts and merges with you and ultimately, delivers many times more than the mere sum of its parts. Of its particular genre, it’s something truly magnificent and possibly boundary redefining. In any field, it can comfortably jostle for elbow-space with the finest records of 2012 thus far. Wonderfully accomplished in construction, devastatingly powerful in delivery, Echo Lake have just raised the bar one notch higher for everyone around them.