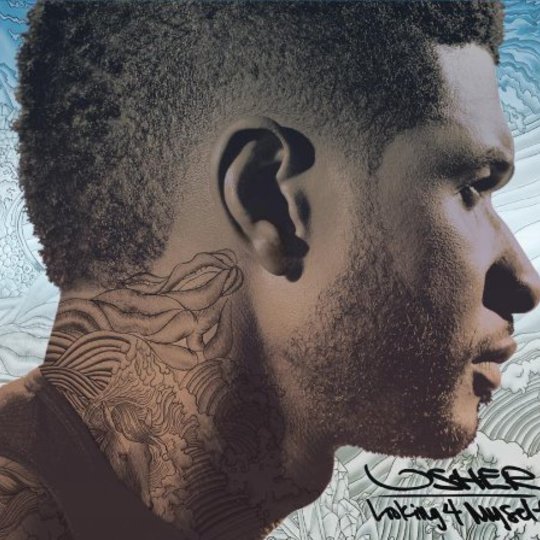 Pop needs a bloke like Usher who can sing, dance and make your girlfriend’s knees tremble with one well-timed flash of his torso. Excluding Chris Brown, naturally, there’s no one who comes close to the R&B superstar’s ability to top the charts with a falsetto vocal that’s cravenly sexual. So it’s more than a little ironic that Looking 4 Myself is an album with one eye on the introspective competition of The Weeknd and Frank Ocean.

At least its writhing lead single ‘Climax’ borrows that gluttonous communion of sex and self-loathing, trumping the Tumblr heroes at their own game. It’s a surefire contender for song of the year and Diplo’s best effort since the not at all shabby ‘Beat Of My Drum’. Even if Usher’s seventh album never recaptures the sheer intensity or quality of this phenomenal track, it’s still a welcome change in direction from the patchy posturing of Raymond v Raymond.

Kicking off with the jubilant ‘Can’t Stop Won’t Stop’, which only breaks its rampant BPM rate to give a little clubstep wobble, carnal delights are placed right in the foreground of this LP. ‘Scream’ is a more by-the-numbers attempt to recapture any hearts and minds perplexed by the newly conflicted Usher. On paper it’s filthy but in terms of Top 40 bangers, only Olly Murs is likely to come out with something more chaste in 2012.

From this point onwards, the pace of Looking 4 Myself jumps straight off a cliff marked ‘pedestrian’. Its raft of slow jams is evenly split between the melodramatic ‘Sins Of My Father’ and the more charismatic ‘What Happened To U’ which specialises in elevating the humble brag into an artform. Fame has made Usher a truly terrible flirt if he thinks the way to a woman’s heart is an endless list of his achievements, “Money, clouds, fancy cars, big old cribs, platinum on the wall, seven Grammys, sold out concerts”, followed by a brief come on, “But I’ve fainted cos I miss you”.

Holding together the leaden ship is a string of sterling collaborative tracks with Luke Steele (Empire of the Sun), Pharrell and Rick Ross. Most impressive is the rampant funk of the N.E.R.D. maestro’s ‘Twisted’ where Raymond IV gets to put his retro soul chops to the test in a rare blast of upbeat energy. That said, Ross reprises his role as everyone’s favourite thug king/former correctional officer to nearly derail ‘Lemme See’ by tying Trayvon Martin’s death to a love for “the most ice” and “cash shit”. Thankfully, the true lothario of this story focuses on thrusting his lyrical hips in every which direction rather than dwelling on the idiocy of his guest.

Strip away four or so tracks of pure fat and what’s left of Looking 4 Myself is a trim and proper album. Far from the bold reinvention initially promised, its restless energy masks over most missteps. Even if Usher wears a split personality between eternally prowling predator and angst-ridden sinner, it’s a compelling costume to have borrowed before the threads have worn thin.