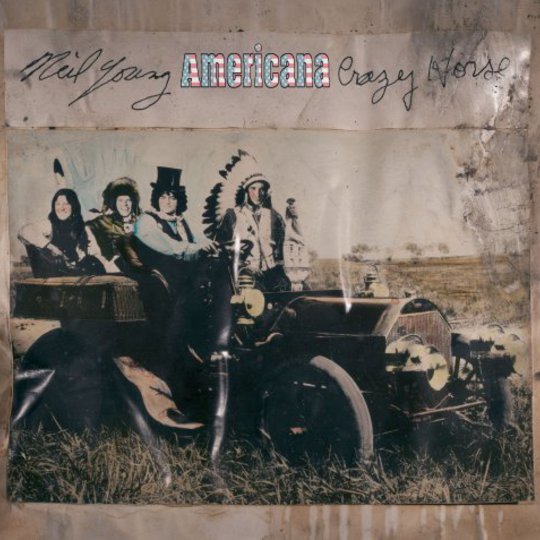 Neil Young fans are used to highs and lows when following the man’s career, but he’s probably not delivered both in such rapid fashion as when Americana was announced earlier this year. After a couple of decent-ish albums, the great man is recording with Crazy Horse again! Whoop! This is going to be awesome, can’t wai… what’s that? It’s an album of covers that includes versions of ‘She’ll Be Coming Round The Mountain’ and ‘God Save The Queen’?

Despite initial impressions, and despite the presence of those particular tracks, Neil isn’t doing this just to spite his fans or as some sort of elaborate joke. Think of it more along the lines of a particularly Neil Youngian take on Johnny Cash’s American Recordings, or Springsteen’s Seeger Sessions and you’re closer to the truth. Like a lot of his latter-day records, Americana could do with a serious trim, but overall it’s a pretty endearing sludge through some folk classics.

It starts promisingly with ‘Oh! Susannah’, guitars bristling into life like a giant waking from a particularly deep slumber before Crazy Horse wheeze their way through some backing vocals. It’s pretty much Crazy Horse by numbers – pinging Young solos, a first take slacker vibe – but it’s given a jolt of life thanks to the source material. As Young sings that he “comes from Alabama with my b-a-n-j-o on my knee” in the chorus, it’s clear that the immediate melody and concise nature of the original cuts through that sludge the band build up and delivers a hefty punch. Left to his own devises, Young can be prone to wandering directionless, but the original material here reins him in.

Musically, that’s about it with Americana, and some tracks suit this rough and ready approach more than others. The likes of ‘Clementine’ actually jump free of their nursery rhyme familiarity and sound more like the free-spirited American classics Young hears them as, the choir he seems inclined to add to every one of his recent albums actually adding a welcome dose of sweetness.

Others – particularly those that are already recognised as folk classics – are delivered pretty straight, ‘This Land Is Your Land’ and ‘Wayfarin’ Stranger’ good but not particularly different from the established versions we’ve heard many times before. Then, there’s the ones you wish Young had considered for a little bit longer. To be honest, he probably did, and then left them on the LP for sheer bloody mindedness.

To say that Young’s version of ‘God Save The Queen’ (not the Sex Pistols song, the British - and indeed Canadian - national anthem) is one of the better versions heard recently is damning it with faint praise – it’s still a turgid lump of a song that brings the album to a unfortunately downbeat close. It’s nearly matched in its inappropriate tone by ‘Get A Job’, a novelty number that underlines the fact that whatever Crazy Horse’s special magic is, doo-wop singing isn’t it.

Given some of the misgivings many had about this record when the details were first announced, only two serious missteps is pretty good going. The rest is solid if rarely spectacular, with the Crazy Horse rumble making a welcome return to Young’s modern day repertoire. I imagine it’d sound awesome live, being cranked out of a massive sound system at terrible volume.