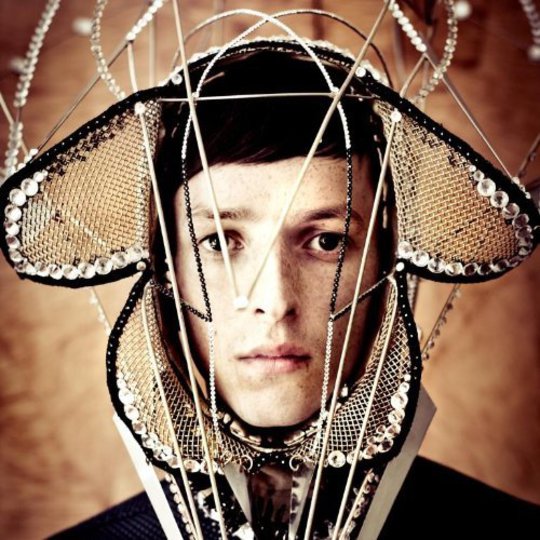 It’s every MC’s worst nightmare: you drop your secret weapon, nobody moves. Orlando Higginbottom saw it first-hand when visiting London - club floors full of people trying to talk and update their statuses at the same time. No-one truly losing it; no spasming slaves to the beat. Then, like Kick-Ass, he had a revelation, went back to Oxford and sewed himself a T-Rex costume. Shortly afterward, Totally Enormous Extinct Dinosaurs was born, delivering nugget after nugget of computerised soul while dressed as the king of the theropods - try remaining static to that one, metropolis!

Keen to make a collection of dance tracks with a shelf life, Higginbottom has a flawless technique for Trouble: style yourself after Hot Chip’s smaller sulkier cousin, bring tunes, wear a headdress, and sing about the things that other people omit from love songs. It’s a simple approach that produces 14 straight hits, ideal for snake-hipped miserablists who like their electronica to be passive-aggressive. On ‘You Need Me On My Own’ Higginbottom blasts Calypso music on analogue synths, searching under his bed for any signs of his absent lover. He’s either got it really bad, or he’s a cannibal. The swirling keyboards on ‘Trouble’ recall a druggy night wandering, the Dinosaur having bopped so wildly he scared off his target girl. Both are outdone by the melodic ‘Garden’ and its slushy Berlin electro which has already shifted a busload of Lumias. Here, Higginbottom puts another heartbreaker in her place, his shy paranoia salted with Game Boys.

If the concept of Trouble sounds twee then its music is the exact opposite, hooking its creator as sure as it’ll hook thousands of clubbers these summer months. Higginbottom’s lost with the crowd in the beats, dark thoughts spilling out of his mouth like baby food. ”Everywhere I look / I just see you / On your own / All that it took / Was one call / From his phone / Forgive me if I’m wrong / But you look shit / All alone / Don’t get a shock / Because I could be / A dog to your bone, or something…” It’s the “or something” on ‘Household Goods’ that sells it, the snarling lights igniting Higginbottom’s fire at the opposite sex. ‘Promises’ is his nod to the scorned nerds of clubland, and ‘American Dream, Pt. II’ steals its shuddering chorus from Grandmaster Flash's ‘White Lines’. Track after track triumphant circuitry pumps, with only ‘Your Love’ offering any kind of apology, a guest vocalist mentoring the Balearic grooves.

Higginbottom’s neutered voice softens some of his bile but there’s a lot more on Trouble to save it from total self-loathing. Perhaps it’s that it connects years of singles, such as the suave, sing-along house of ‘Tapes & Money’ without once tripping up, or that when it does wobble - the knockabout samba of ‘Panpipes’ - it self-corrects so quickly you’re lost in the next beat. Drifting as far between extremes as his niche allows him, Higginbottom’s made one of the most delicious records this year, so sharp it’s got him bombarded with remixes but catchy enough to get him into bedrooms, and festivals, and the offices of the big cheeses at Polydor. If you wish Berlin electro would occasionally stop to drop a Molotov then you need Totally Enormous Extinct Dinosaurs; you need Orlando Higginbottom’s wry voice and his skills on the decks. Dance can’t be accused of being dead-eyed anymore. This is the album Morrissey could have made if he’d been treated to MDMA and burgers.