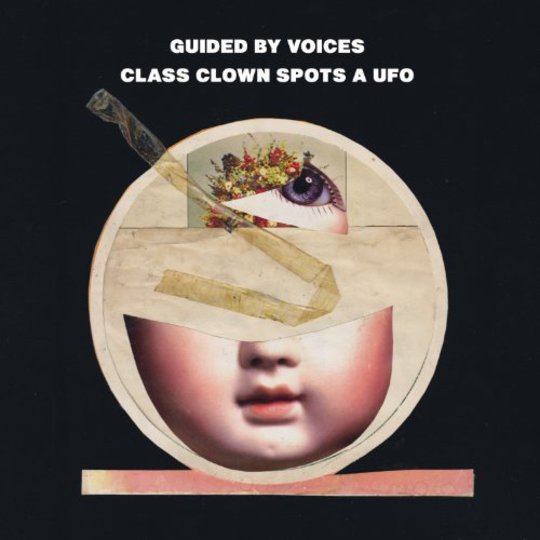 It's the dead of night outside two adjoining quiet suburban houses. A 1930 Ford Model A pulls up and rattles off a warning round into some trees (a fox is struck in its tail by mistake and is forced from its dustbin restaurant whimpering). The passenger window is jerkily unwound a bit. A bid to shuffle a loud hailer out of the gap is attempted, aborted, muttered about, intermittently and mistakenly through the loud hailer, at which point a light comes on in one of the houses. The car window is finally fully cranked and Guided By Voices kingpin Bob Pollard gives his address: 'Right. Same drill as before boys.' he garbles 'And the time before that. And the time...'

Tobin Sprout: 'Dude, get on with it.'

Pollard: 'Right. Yeah. Anyway, come out with your hands up. Although we all know that we're not gonna kill you so, whatever, but we're gonna need to borrow y'all for a few days again. We'll get drunk and have fun and then y'all can stagger home to your drips, armchairs, colostomy bags and VH1 Behind The Musics. Sound good? Well, c'mon then! It's time to... kick out the jams... err... again, motherfuckers!'

Skip Spence sticks his head out of one of the many windows that are now lighted, 'Didn't we do this a few months ago?'

Pollard: 'Yep, and we're doing it again, come to think of it we'll be doing it for a third time before the year's out.'

Right. Stick em up. Your hands. Who likes Guided By Voices? You don't or don't know? Then listen and check.

You do? Well here we go. You probably know that after a five year sabbatical they returned this year with Let's Go Eat The Factory. Which was majoratively brilliant. And now look... another album. Within six months. Can you even believe it? There'll be another this year too. I know! Of course you can't believe it. Its a proper feat for any young band but these are some middle ages guys that are just having fun leasing new life towards the filtering of various Sixties rock templates through a Nineties US indie sensibility. What makes the record in any way irresistible is that you can clearly hear the merriment. They were on a Strokes-initiated game of Jeopardy and everything! If that's not a band who like having fun then I don't know what is.

'Class Clown Spots A UFO' and 'Keep It In Motion' are almost tasteless in how mercilessly catchy they are. 'Billy Wire' borrows the chorus chords from Nirvana's 'Breed', tacking a gorgeous stomper on top, replete with brief meltdown middle section. 'Starfire' bizarrely combines eighties synth strings and snare sound with barely capable musicianship over a nice little soft slice of Move-esque psychedelia. 'All Of This Will Go' is a wistful sorta Byrds-y harmony fest...

Like any GBV album there are about a million tracks over the course of about ten minutes - a characteristic that can be charmingly frustrating. There's just so much to take in. But that leads us back to the fun. Most of this record isn't the kind of total genius that can be found elsewhere in their canon but it's a fine album that shows what can be done if bands just relaxed a bit, stopped worrying about peripheral shit like whether they have the full 16 eyelets in their boots done up or plump for the more casual 14, wrote songs, rocked out and enjoyed the whole shindig.