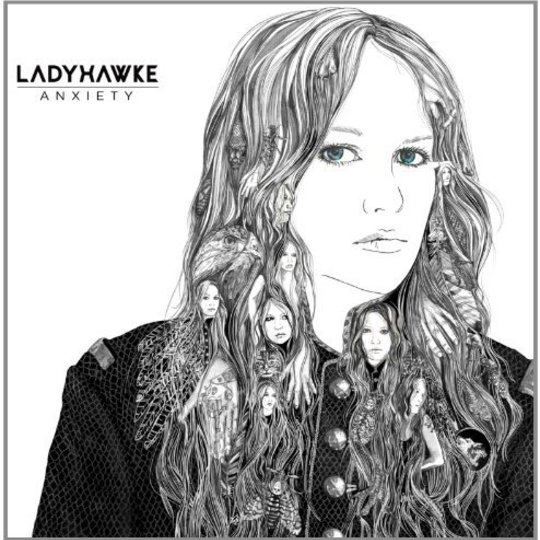 In terms of intelligent modern pop records, it wouldn’t seem that far-fetched to imagine Pip Brown’s fine 2008 debut sitting having dinner with Annie’s Anniemal, glowering through heavily mascaraed eyelashes and muttering 'Why the f**k aren’t we massive when Ke$ha is?'. Though her self-titled debut as Ladyhawke certainly didn’t slouch or sag in commercial terms; that seems a fair and pertinent question: the 2008 record was a genuine surprise package amongst a sea of dreck and derivatives bobbing aimlessly around at the time. But that’s the way these things transpire and so undaunted, Brown returns for a second attempt at staking her territory in an electronic pop world which seems to grow somewhat stranger, more fractured and that bit more threatening by the day. In fitting with this, Anxiety is a record that never quite seems comfortable in its own skin… with that generally being meant in positive terms. It’s jittery, nervous, and full of self-doubt and dilemma. But all underpinned by a swirling decadence and the tinge of chemical aplomb remaining amongst the morning-after blues.

First things come first: Anxiety sounds great. If anything, the electro influences are worn even more prominently on the sleeve, arriving as a gleefully seductive, fizzed up and high-octane collision of kaleidoscopic pop, indie and electroclash. And when the perfect storm does indeed come together, she’s capable of brilliance. The dirty bass and breathless plotting of opener ‘A Girl Like Me’ is delicious, as is the glam-stomp plea of ‘Sunday Drive’ and the rattling, overdriven showdown of ‘The Quick & The Dead’. But best of all is the quite magnificent ‘Blue Eyes’, which comes out swinging with clattering hi-hats, scabrous electro-synths and a dominating “nah nah” chorus, before being topped off with a wickedly sleazy guitar solo. It’s the album’s finest track by some way and if there’s any logical sense prevailing, it’ll surely be the next single. Actually, scrap that. It HAS to be.

Anxiety however, does have two nagging and wounding flaws. There’s clearly a significant streak of self-doubt running through the album: from the vaguely disturbing cover are, to the CD design (a somewhat nonplussed cartoon demon face) and the continual pleas, paranoia and ever-present sadness that seems to penetrate deep into the cracks of the music. But the lyrics can eventually become somewhat wearisome and, at times, flirt dangerously with cliché. The title track is especially guilty in this regard with a selection of clunky rhyming couplets stacked awkwardly one after another. In all honesty, it isn’t so much that there is anything truly abysmal to hold to account. It’s more that the melancholia of the lyrics does eventually begin to drag its heels into the momentum and flow of the record. That being said, when the occasional moments of fight arise, the record genuinely shines: the excellent ‘Cellophane’ and the sneering kiss-off closer of ‘Gone Gone Gone’ being a particularly impressive climax to proceedings.

Possibly a touch more concerning in terms of the broader picture is that the album’s less stellar moments do present as little more than a reshuffle of the sounds and structures of her debut. Which considering its respective merits alongside the best tracks showcased here on Anxiety, isn’t necessarily a bad thing per se. But apart from the aforementioned ‘Blue Eyes’, you do struggle to identify any obvious hit single present among the ten (good as they are) tracks here that you can see advancing Ladyhawke’s standing in the present musical social order.

But then again, do you dare to go about the risky business of transforming your sound dramatically and potentially alienating your core supporters? It’s a dilemma that Pip hasn’t fully resolved within herself or her music yet: in the words of opener ‘Girl Like Me’, she remains somewhat “between the devil and the deep blue sea”. For now, that place is certainly pleasant (if somewhat twisted and stormy) destination to visit for a time. But in terms of a more permanent habitation, you’re still looking for that little bit more; that sheer bloody-minded, blueprints-to-the-wind mentalism that mutates good electronic pop music into great and would surely afford the best opportunity of realising her undoubted talent.

Ultimately, for all its merits and charms, it’s unlikely that Anxiety will draw in too many people who weren’t smitten the first time around. But in its more luminous moments, it also contains enough to suggest that there is still a great album lurking somewhere underneath the Ladyhawke moniker. Time will tell.