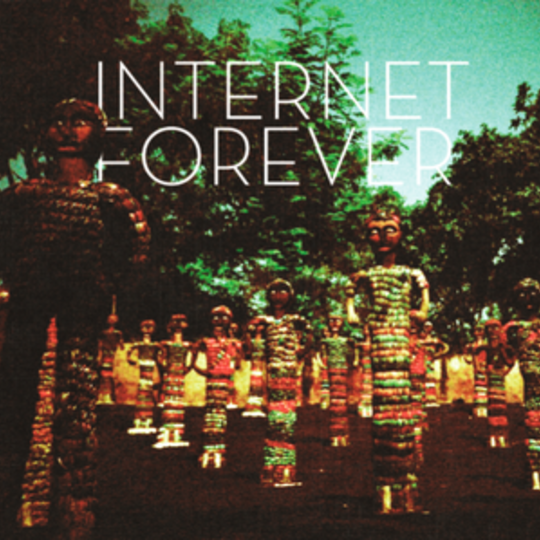 The Needle Drop’s Anthony Fantano recently [disagreed][http://www.youtube.com/watch?v=VuFWZmcH-nY] with the music documentary PressPausePlay’s argument that there is an oversaturation of mediocre music on the interweb drowning out all the real talent out there. I would have to agree with Mr Fantano - I have discovered a huge amount of talent while surfing the web in the past.

Enter Internet Forever then who, since forming on the Live Journal message boards, were unfairly pigeonholed in the numbers of what might well be classified as mediocre, lo-fi bands cluttering up the internet. Once they released their debut singles ‘Break Bones’ and ‘Cover the Walls’ though, it was clear that this was a talented trio far ahead of the pack they had been placed in. Both tracks are glorious pieces of fuzzy indie-pop radiating warmth and personality other bands lacked; their inclusion on this debut long player continues to reaffirm that fact. In the four years since the band formed, it’s clear that they have gone a long way from their bedroom recording days and have become a more tightly knit and polished unit.

Nonetheless, the band has retained the character and charm that made them so appealing in the first place. ‘3D’, for example, sees vocalist Laura Wolf regret an online relationship as she spits: “Refreshed your page a hundred times / To see if you’d updated / Then I looked at what you’d written on the message board / And everything you said I hated.” The venom continues to seethe on ‘Centre of Your Universe’ as the band curses an impossible relationship: “We want to be the centre of your universe but someone above won’t let us through / We want be the centre of your universe but someone above us is saying that’ll never do.”

Such bite is made more propulsive thanks to the engineering talents of James Rutledge (MGMT, Radiohead, The Kills) and Dreamtrack (Foals, T3ETH). The short opener ‘Golden Temple’ sounds threateningly like a helicopter blade closing in whilst the noise-rock freak out of ‘I’ll Sleep When I’m Alive’ is particularly volatile. The real cherry on top of this hyperactive cake comes in the form of highlight ‘Page of Books.’ Complete with childish xylophones, a flimsy structure and full on group chanting, Internet Forever may as well be screaming: 'HEY EVERYONE, LOOK AT US! WE’RE PLAYING A LOS CAMPESINOS! NUMBER HERE!' And they do it pretty bloody well too.

Of course, there is still an element of ‘bubble-gum cuteness’ throughout – notably ‘Happy New Year’ which has a dainty little synth which probably could never hurt a fly. But for the most part, Internet Forever display an explosive energy which is just shouting out to be heard… and everyone would do perfectly well to give them their full and undivided attention.