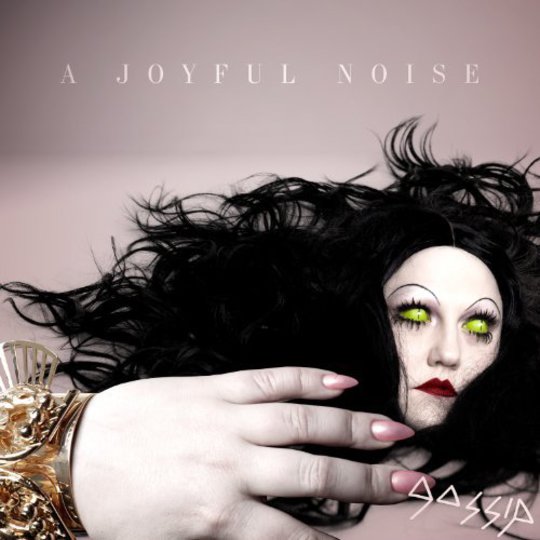 Under disco's cool sterility bubbled a wealth of white-hot subtext. On one hand there was a fine tenor of defiance, as the marginalised – both gay, black or both – performed the fabulous acts of self-expression denied to them in the cold light of day. On the other hand a hum of self-determination padded disco's pristine pleasure-machines, as blue-collar slaves become the high-class gods of the weekend. Socio-political passion powered a genre which on its surface was apathetically hedonistic, purely functional, even blank.

(The) Gossip have always had designs on capturing some of that same kind of submerged tension. When they hit the big time in 2006 in a whirlwind of winking political innuendo, fashionista threads and choppy dance-pop, they offered something a little unquantifiable. If not quite disco-sinful, they did channel a type of polysexual menace, and the righteousness of outsider-dom. But sharing more in common with raggedy indie than Bacchanalian Eighties Manhattan, in truth it was Beth Ditto's indomitable presence and the act's hipness during the disco-punk boom that afforded them their edge, as opposed to any counter-cultural resonance. It's something Ditto seems to have cottoned on to, giving chase for the Italians Do It Better dollar. In case the modish label usurped her divine right as a nu-disco magnet, she teamed up with James Ford for last year's house-inflected solo EP.

Engineered by Xenomania hit-maker Brian Higgins, A Joyful Noise bashes Ditto's house influences against the band's spunky soul-funk, along with inspiration from Abba. That's right, those sexless ken dolls of euro-creepiness fame. And had the Gossip's music carried any subversive heft in the first place, then against a pure-pop canvas such as A Joyful Noise's it would have stuck out like diesel on milk. Consider newcomers Azari & III. Although not a million miles removed from the fare on show here, Azari nailed some of disco's patented tension with their early house facsimiles, specifically on Aids allegory 'Reckless With Your Love'. The song in question is opulently, flamboyantly 'pop', but the difference between the acts lies in the infection angst beneath. Gossip would kill for such infiltrating frisson, but for all their heartfelt politicking, Higgin's pop-lite makeover only accentuates the hollowness that's always plagued their songs.

One contributing factor to A Joyful Noise's toothless-ness is Ditto herself. Acutely disco-literate, she documents, with clenched meticulousness, every thematic cliche going - from cat-and-mouse love games to the woman-scorned approach, to the empowered 'I-Will-Survive' schtick. But reviving the (now anachronistic) language of the early Eighties – here both lyrically and delivery-wise - means removing the language from its original social context, which neutralizes its radical thrust. And without the grungy punk foil of their previous incarnations, Ditto comes across self-consciously and overbearingly stylised here. Compared to Antony Hegarty's individual, contemporary and easy approach to disco lyrics, by not allowing for Ditto's idiosyncrasies her role amounts to faithfully re-enacting the right postures and mannerisms of the bygone era in honour.

The same can be said for the music. 'Get Lost' stumps for vamping piano stabs and sub-Kylie retro dance, while 'Involved' also suffers badly from over-familiarity. It's also in thrall to a certain strain of disco that should be left in in the past, with the chorus triggering pavlovian reruns of Seventies Oscar shows - all crap film stock and faux marble flooring.

But it's the big numbers that fall the flattest. 'Love In A Foreign Place' and the funk-less 'Moving In The Right Direction' offer differing variants of Chic's 'I Want You Love', but without the europhile elegance, lushness or undercurrent of passionate hunger to be someone. With neither the groove of disco or the stiff electricity of Hi-NRG, what both tracks do have in spades, though, is Abba-esque choruses. But, whereas in the Scandi's hands the pop-earnest melodies channelled a kind of domesticated glamour, amidst the new car smell of suffocating professionalism, here they lack lustre. And like a phoned-in Robyn, the Euro-pop 'Move In The Right Direction' moves, indeed, in exactly the right direction. That is, according to the strict guidelines of the official dance pop charter, and with a totally depressing predictability.

There is salvation, however, in the tracks of a darker bent. The shadowed 'I Won't Play' is carried on grimey bass and guitar scree, as a cuckolded Ditto becomes another victim of love. Including some great one-liners (“How you live with her and yourself?”), against the relatively brooding backdrop you can really feel Ditto's pain, behind her thin facade of scorn. Also coated in dark intrigue, 'Perfect World's insistent bass and portentous synths pump life into the dance-rock rhythm. It's another more chancy backdrop that serves to lend sting and realism to Ditto's vocal performance, which becomes almost tyrannical by the close. Truly she puts Rhianna and Beyonce's anaemic attempts at female empowerment to shame. Album highlight 'Horns' is a brass-bolstered triumph of ostentatious camp-pop, but in the end,A Joyful Noise is a femme-power event album too shallow to achieve the import its creators intended.