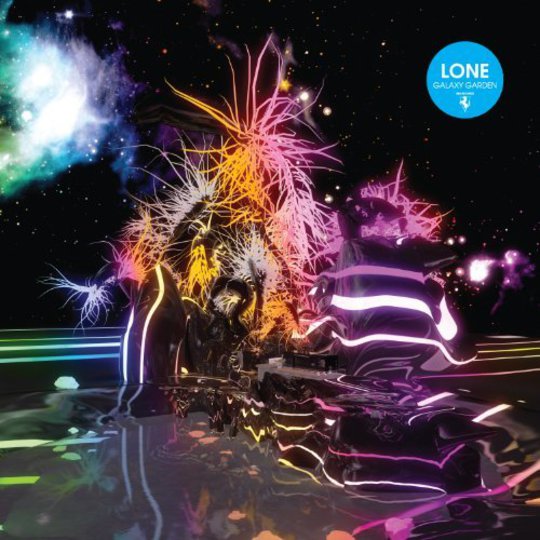 Never underestimate the pull of house music. It gave us immortal YouTube moments, eye-popping t-shirts, glow-sticks in Woolworths and increased mineral water prices. It also got nine-to-fivers out of their lounges, and all thanks to kids trying to make disco music on really budget equipment (and ketamine). Many never got over the 1994 Public Order Act and the movement’s swift commercialization, so when young upstart Lone began channeling it on Lemurian, he was met with both cheers and titters. The Manc had spirit but not a lot of tricks, and was quickly tagged a one-trick pony. Galaxy Garden, Matt Cutler’s third album, sees that tag lifted. He’s delivered the record he’s always promised: a cross-section of house layered with nature, climaxing Segas, and good vibes, and his trademark muzak for manic depressives.

Unlike Zomby’s Where Were U In ’92, Galaxy Garden doesn’t limit itself to rave components only. If anything, Cutler’s expanded his studio, creating a rollicking Bermuda vibe that he holds for an unbroken 51 minutes. The keyboards alone on ‘Raindance’ will be heaven to anyone who took ecstasy during the Major years, while Machinedrum’s spot on the swirly ‘As A Child’ is like every Hollywood voodoo scene done correctly. Cutler’s knowledge of how to rev up a crowd is balanced by his intense nerdiness, shown on the likes of ‘Dream Girl/Sky Surfer’, where queasy SNES music fights with someone saying ”Together”.

The only snag with Galaxy Garden’s flow is it can feel too fidgety, with literally everything thrown into the mix - kitchen sink, drainer and basin waste included. Like Burial, Cutler’s remembering music he was too young to embrace at the time, and there’s a sense of scrambling in places, such as the watery interlude of ‘Dragon Blue Eyes’. But that could just be Galaxy Garden’s reaction to the hosepipe ban, or in lights of its pumping muscles, a medicinal sports massage. The malicious bells of ‘Earth Lounge’ contain slabs so chunky you could pave your garden with them, and ‘Lying in the Reeds’ crystal sounds are an ear-worm for old Walkmans. Eventually the drugs dip down, and Cutler touches earth gently with the carefree garage of ‘Spirals’ and the glistening ‘Stands Tidal Waves’.

Surviving a tidal wave might be the best way to summarise Galaxy Garden - at times it’s like being caught in a Honolulu crack epidemic, at others; the most accomplished retro project in years. Anyone who caught the 7-inch of ‘Crystal Caverns 1991’ will have broken open a warehouse time capsule, hearing noises like Orbital being depressurised, never quite sure if the acid’s worn off. Critics of his previous albums will be pleased to know that the tight loops resonate through this one, but this time Cutler’s shot tem through a prism, showing the kids it isn’t all about who can find the bass dial. Lone has delivered a Nineties attack that even Neil Buchanan would be proud of. If there’s even a chance the future is going to be this colourful, book your place at Bill and Ted High 2691 now.