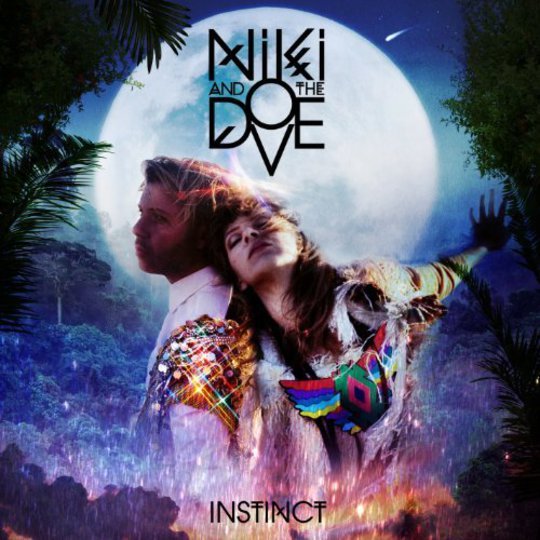 If pop songwriters tend to cram meandering stories of cheap nights and brief encounters into three minute bursts, then Niki and the Dove write the headlines in glitter-ink. With grand musical gestures that calmly capture explosive moments without getting caught up in the details, the Swedes make elusive, epiphanic dance-pop, which explores a fecund topography like a child investigating her dearest fairytale.

The music they make is frequently stunning. Not only for its pathological magnificence, but its deceptive, niggling urgency, all curious sound effects and flourishing, tribal hyper-rhythms. It’s powerful because it searches for cracks in the triumph, painting over flawed grandiosity with something lyrically complex and uplifting. Take their keyboard maestro Gustaf Karlöf’s word for it: 'When I listen to a song, I can feel so much life that I want to live my life, you know?'

He has a point - throughout their Sub Pop/Mercury debut Instinct you feel the simple thrill of euphoria beating hard and fast. Never more so than on resplendent single ‘The Fox’, a rich, symbolism-heavy narrative that sets off the pyrotechnics with nods to modern Scandinavian pop and the darker tones of Kate Bush’s Hounds of Love. Flecked with enough sultry strut and pure Eighties bombast to distract Prince from a furious lovemaking session, it erupts in a rainbow of synth and shoots its divine load over jangling keys, orgasmic quivers and chairs scraped against desks for percussion.

As befits a synth-pop band charting a relatively conventional route to relatively mainstream success (although core duo Malin Dahlström and Gustaf have toiled since the mid-Noughties), critical eyebrows have been raised like excitable fire alarms. The band are freaks, fakes and hippies; glitter on their balls and dead snakes dangling from their doorways. But to write Instinct off as witchy or ethereal would miss the mark. Like the lyrics of Lana Del Rey, Malin’s often juxtapose traditional romantic grandeur with everyday urban minutiae - ‘Last Night’ for example centres on the endlessly quotable “last night we got married in a taxi” - and there’s a sense the plain obsession with animals and nature works as an allegory and plea to a world verging on environmental disrepair - a sentiment alluded to in interviews by Gustaf and principal songwriter Malin.

Elsewhere nature crops up in interpretations of the forest (‘The Fox’) and desert (‘The Drummer’); ‘Tomorrow’ glistens with a positively apocalyptic chorus of “if Tomorrow comes, I wanna spend my life with you”, while ‘DJ, Ease My Mind’ chants a wish to disappear amid lazer lightbeams of city clubs, as dreamy, throbbing bass seeps through the bedroom wall.

On musical terms, however, we could probably lose a few cuts: ‘In Our Eyes’ sparkles brightly without ever really finding a distinct melody, and the mid-paced numbers - namely ‘Love to the Test’, ‘The Gentle Roar’ and ‘Last Night’ - are pretty if unspectacular and kind of threaten to bring the record to a standstill.

But for the most part it proves difficult to cling to your reservations. I suppose it’s fair to level a charge that some vague hippy theory underpins the whole shebang - at least insofar as Niki and the Dove celebrate a deeper, slightly wanky appreciation of our crumbling environment. That said, straightforward joyful pop turns up in abundance, too - one hopes ‘Somebody’ will one day make a cracking hit single - and while the marvellous ‘Mother Protect’ and ‘Under the Bridges’ marry explicitly epic intentions with tenderness and exotic grace, there’s a captivating humanity that never leads too far from home. Because like the best fantasy, Instinct leaves you that bit more comfortable about the world you ultimately return to.