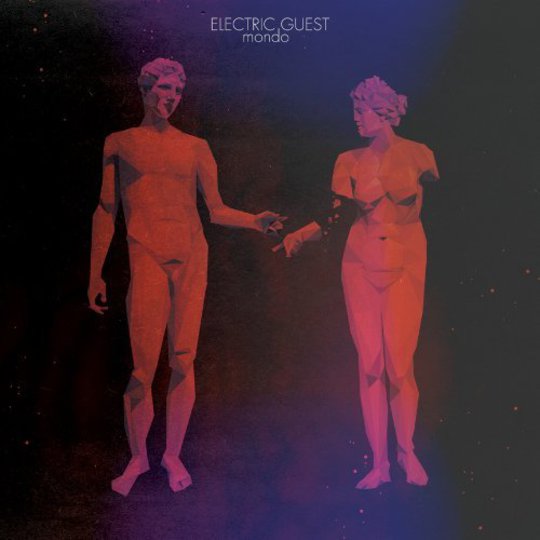 Electric Guest are an oddity; Mt. Washington hipsters whose USP is they’ve been teamed up with famed producer Danger Mouse. On the surface, it seems like an arranged marriage, or that the bloke on the reception desk directed Mr Mouse to the wrong recording booth - the one with the two kids in it arguing intensely over cardigans. But it turns out the trio have been friends for years, with Danger Mouse mentoring Matthew Compton and Asa Tacoone when they were still in LA, then moving them out to his house to grace them with the magic touch he brought Jemini, Cee Lo Green and Gorillaz. Their sessions over, Mondo’s pop jingles are bound to score big with lovers of pure clean pop, and S Club 7’s ‘Reach’. For lovers of other stuff, the plus side is you only have to endure 38 minutes - surprising given that the name Electric Guest comes from Tacoone’s supposed skill at loitering in Dunkin’ Donuts.

Trimmed down from over a hundred tracks, Mondo can best be classified as sunny, thigh-slapping pop, or LCD Soundsystem with table manners. Lifted periodically by DM’s production or Compton and Tacoone’s hidden bitterness, it’s music suitable for family gatherings, about as outwardly inoffensive as they come. Each song is a different colour: the accordion hip-hop of ‘Holes’, or ‘Awake’ and its attempts at Sting-style reggae. But they’re also so coy you need an untainted soul or black humour to get them, even if they do have enough happy hooks to make even the crustiest of pessimists start whistling.

It’s when Tacoone and Compton attempt sincerity that Mondo begins to feel forced. Robbed of its chief weapon - its breeziness - it exposes the rap ambitions at the hearts of its creators. At worst, it’s the kind of CD your boss puts on to start the party, and at best, such as the affecting anti-celebrity hymn ‘Under The Gun’, it still feels like Motown repackaged for Starbucks. The hiss of the airbrush permeates everything, impossible to ignore when it turns a rousing intro into Christian mini-bus music, or Miike Snow lowered to room temperature. On ‘This Head I Hold’ Compton does his best Diana Ross, crooning as kick drums and piano gleam around him, but his constant fickleness can’t be shaken off, no matter how hard he tries to swing his booty.

Even while loosing off lines like Tacoone’s beautiful ”Love is our only true escape”, it still feels like Electric Guest put irony ahead of melody. Their generic, sappy style makes them safe for all occasions (biker rallies apart), and their slinky charm balances the conscientious lyrics, honouring the wash-ups, the start-struck, the gullible. But it might be that the band can’t see they’re a part of their very own muse. Two competent songwriters in the hands of a big-shot producer, it’s like they’ve been put on the bus, turned onto coke and guaranteed fame - it doesn’t matter if they can’t find the tunes. When a raw moment occurs, such as the nine-minute ‘Trouble Man’ they can give you a melody that really sticks, Compton channeling ‘Hotel California’ as he looks at unrequited love, and how best to answer it. But otherwise, Mondo is that rare case of judge by cover, or what you see is exactly what you get.