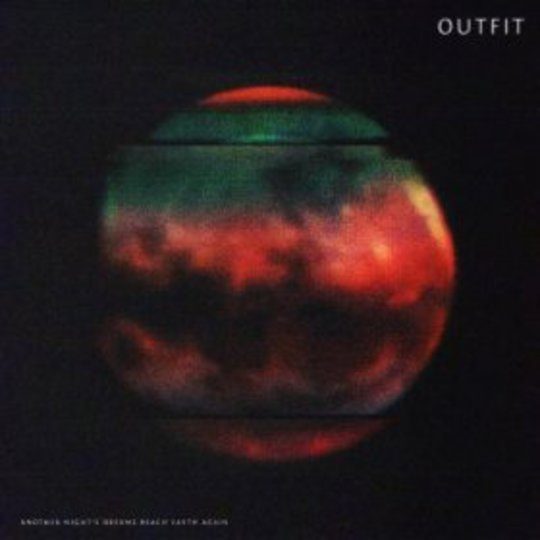 If you are aware of any of the musical outfits from whence Outfit sprung, the musical outfit that is Outfit may come as some surprise to you. When you consider that they count the rambunctious a.P.A.t.T and the equally anarchic Stig Noise Soundsystem amongst their former band mates and scene-buddies in Liverpool, you begin to wonder if the tidy structures, clipped drum beats and classy synthesised backing have all been constructed and neatly compiled as a very polite rebellion against an unruly past.

Another Night’s Dream Reaches Earth Again is a stylistic riff on the ‘Two Islands’ single that they released last year, though the four tracks contained herein lack the punch of ‘Two Islands.’ Outfit write the kind of gentle tunes that inhabit you, though; they weren’t designed for boxing rings, you’ll be wooed before you’ll be bowled over; they’re all the grander for that. These are songs crafted for stoic moments and mornings spent languishing over the night before. There are nods to the past, a distinct synth sound, beholden to the Eighties. Yet, somehow, Outfit seem to encapsulate the peculiar sense of unease that is defined by the current time.

Over a steely, almost clinical backing, the vocals (never ‘drenched’ in reverb, but given a gentle dusting down with the stuff) give the tracks some serious allure. There’s talk, in ‘Drakes’ of “hiding in the fringes,” as the words themselves get brushed over by metallic guitars. Vocals come and go, melding seamlessly in with the music, teasing, whispering and wearing out the ‘play’ button as you try to decipher the code. The closing track ‘Dashing In Passing’ is the most emotive, those elusive vocals coupled with one of those efficient, ‘off the shelf’ melodies, evoking a thousand songs before it but never in debt to a single one of them.

Outfit are a band to be nurtured; there is no sense of immediacy in their songs. It will take several listens before you get close to being able to define their sound (a frivolous pursuit, with no end). Theirs is an intriguing world, devoid of gimmickery and bold-as-brass imagery, full of catch-me-if-you can emotion and burnt-out soundscapes. This band is not desperate for your attention, though they are thoroughly deserving of it.