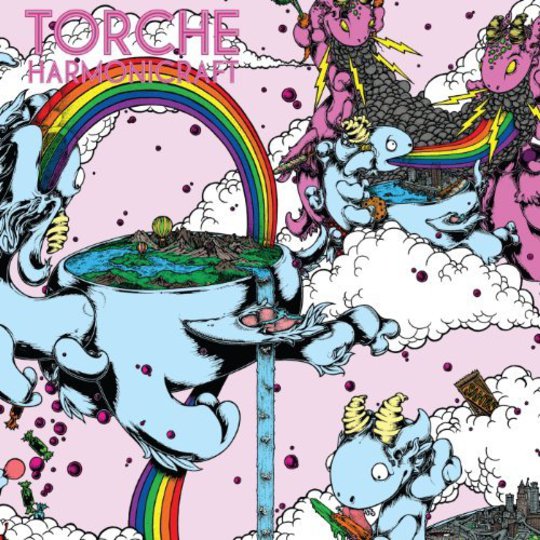 Who says metal has to be constantly laboured by doom, death and destruction? If you’re searching for a little optimism instead, look no further than the album cover above. Maybe they’re trying to make a statement, perhaps all that Floridian sun has gone to their heads, but Torche are here to bring a ray of sunshine into metal’s shadowed cell.

With Harmonicraft, the band’s third studio album, Torche have further refined the sound they’ve been developing over the past eight years. If there was ever a summertime metal album, this is it.

From the outset, Harmonicraft is a gloriously euphoric listen. Opener ‘Letting Go’ hits where it counts, rattling bones and squeezing hearts, with an almost overwhelming level of fuzz in the mix. This noise and distortion threatens to overthrow Steve Brooks’ increasingly accomplished vocals at any second, especially during one-and-a-half-minute riff-rock workouts like ‘Walk It Off’ and ‘Sky Trials’, but this only draws attention to the album’s uninhibited nature.

Although it’s always been difficult to completely pin the stoner and sludge tags to Torche, this is perhaps the furthest they’ve moved away from such labels. Yes, the fuzz is still there and Brooks’ singing is still unquestionably virile, but at times this sounds more akin to Smashing Pumpkins, albeit without Billy Corgan’s existential whines and stretched-out compositions: Harmonicraft is a fast-paced listen and one where each track feels so fully-formed within its first few seconds that it doesn’t need any additional development.

The result is a strange pop-sludge hybrid, something some stoner rock fans will likely object to. Sure, the band aren’t as sludgy as they used to be, but with Harmonicraft they’ve taken a nice long bath and emerged cleaner, fresher and more streamlined than before. This may be a result of new guitarist Andrew Elstner’s influence in tracks like ‘Snakes are Charmed’, where The Edge-esque syncopated delay guitar lines lead to catchy melodies and, again, that great feeling of optimism, unexpectedly born of a fuzz-rock grind.

There are a few morose moments in store however. ‘In Pieces’ brings the Mastodon doom, ‘Solitary Traveler’ is crushing in its minor-key loneliness, while ‘Looking On’ closes the album in classic Torche style, three minutes of traditional sludge followed by two minutes of repeated power chord rings. Yet, somehow, this doesn’t clash with the general buoyancy of the rest of the album; Harmonicraft maintains a certain sharp-edged consistency that ensures a logical progression from beginning to end.

Not everyone is going to like it, although I’d wager that’s more to do with self-impression rather than actual disdain. This is a predominantly positive album, but Torche do elation like no other band; never veering into over-sentimentality, they tread a straightforward route to their listeners' hearts. It’s not a monumental leap forward from the band’s previous work, but Harmonicraft displays the signs of consistent refinement and revels in that fact. Summertime metal album of the year? You betcha. Now we just need that sunshine back…