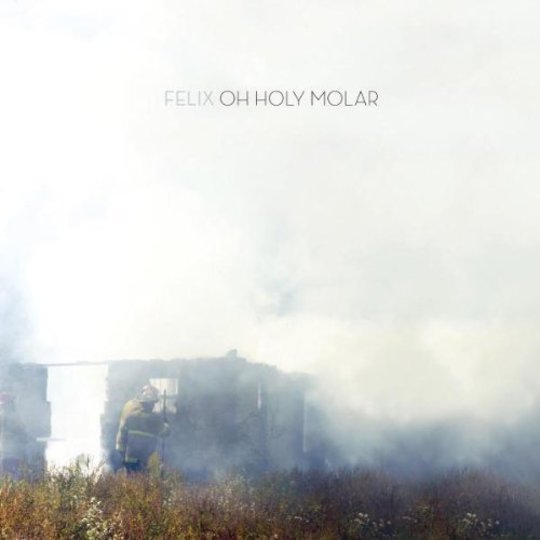 With Kranky-released debut You Are The One I Pick, Felix cast into the lake eleven pebbles that would linger long after their ripples faded. Think Slint’s fractious post-rock masterpiece Spiderland: here was a record whose immense delicacy smothered its underlying menace with elegance and poignancy. A record offering not only escapism - seriously, ‘bewitching’ doesn’t come close - but whose brutal affections and nuances would be teased out and yearned for in quiet moments for months to come, like an estranged sibling stuffing esoteric messages into a bottle tossed through your bedroom window.

Three years on, Oh Holy Molar adds bark to the debut‘s bite. Since then the chamber-pop duo, Nottingham’s Lucinda Chua and multi-instrumentalist Chris Summerlin, have added a third member - namely drummer Neil Turpin, nabbed from Yann Tiersen’s live setup. It’s hardly the most revolutionary shakeup, but initial distinctions are twofold: the hushed, awkward vocal performance of the debut has been streamlined somewhat, perhaps for popular consumption, and where You Are The One I Pick’s pathetic whispers initially evoked a fleeting sense of embarrassment on Chua’s behalf, you feel a boldness to Oh Holy Molar that’s sophisticated and immediate.

There’s a sprightliness that seemed unfathomable, too. In this respect the title might be evidence of a newfound snarl. While You Are The One I Pick’s Lynchian sense of fantasy remains - take the title track’s cradle-rocking refrain of “Wake from a dream where your teeth are gone” - there’s a sense of guile that suggests triumph over youth’s anxieties. The sinister, hermetic ‘Oh Thee 73’ roams the graveyard of so many lost Friday nights, as the titular tooth hangs on a string necklace worn “as a treasure / Under my jumper”, Lucinda cooing with the appropriate helping of furtive malice.

‘Oh Holy Molar’, meanwhile, delivers an oddly drifting narrative as pianos lope down an Escherian staircase in stilted waltz time. The aching, teasing highlight ‘Practising Magic’ makes for Chua’s deftest lyric, while ‘Hate Song’ is her bluntest. “Whenever you get drunk / You tell us all how you are the wittiest one / And the cleverest one / It’s no fun” confides the latter, matter-of-factly. Its gentle, sympathetic barbs work like a dream, at once startling yet soothing, like waking up groggy and being flung down Chua’s John Malkovich portal. In fact, though there’s more to be said about the singer herself - not to mention enchanting stringsmith Summerlin - you feel the band’s backstories are perhaps best left untouched; this is music that holds true as a complete statement in itself.

Any niggles are pretty minor: ‘Rites’ is a weak link only insofar as it could be a standard cut from Peggy Sue’s fantastic Acrobatics LP, and despite being recorded in a vast, converted Forties cinema, the album’s brighter production can’t match the pillow-talk intimacy of the debut. Shock of the new aside, it’s also true that this is less deeply affecting a collection than its predecessor. Where You Are the One I Pick slipped by relatively unnoticed, before creeping back, like a spider up the drainpipe creating conceptual cobwebs just beyond the broomstick’s reach, the grace of Oh Holy Molar is wielded a little more knowingly. Stylistically you might also find it slightly more derivative - musical nods to Radiohead’s ‘Polyethylene’ punctuate the sarcastically cautionary ‘Pretty Girls’ - but yeah, now we’re picking holes in what’s essentially a very welcome return from a persistently intriguing and extraordinary outfit. It’s difficult not to feel terribly possessive over the renowned Kranky label’s sole British signatories, and it’s with a certain relief that their songcraft proves singularly remarkable once more.