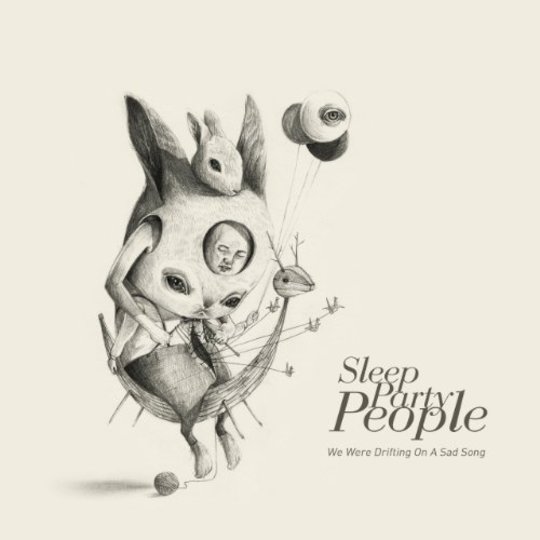 The resurgence of dream-pop suggests a discontentment amongst music listeners. We seek escapism, a chance to get away from the mindless monotonous Euro beats, and tinny orgasms erupting from second hand Pay As You Go handsets. The cities are vibrant with sounds, as are the provincial towns, but we all want to go where no one else is, in search of something we can only find within our own depleted imaginations.

Sleep Party People produce a brand of music which assists the getaway into another world. Euphoria dosed soundtracks for those tired feelings you experience as your eyelids droop millimetres down like slow moving vertical blinds. You could make an argument that this kind of music requires a visual accompaniment to truly bring it to life, some ethereal scene set in a sunlit forest with men dressed as garden gnomes and blonde lasses with angel wings. In effect the body of We Were Drifting On A Sad Song is a visual enhancer, allowing you to close your eyes and view things through a shadowy kaleidoscope.

Vocally, the emphasis is on melody, with Brian Batz’s Elizabeth Fraser inspired tonal uniqueness fitting in with the track as opposed to standing out on their own. It’s almost as if the words don’t matter, the songs gliding across a vast emotional spectrum anyway. ‘A Dark God Heart’ with its recognizable piano opening is the calling card of a wide-eyed adolescent with time on their side, but a brain clogged of gush putty. Batz’s melancholic bleat stirs in a rural meld of violin. Orchestral manoeuvres in the light, the song explodes after the three minute mark into a resounding “Fuck yeah!”

I must admit I was quite anxious before listening to this album, the little I’d heard of Sleep Party People led me to doubt whether I could pay attention (without drifting off into my own pinballing thoughts) long enough to pass relevant comment. The dull ambience of ‘Chin’ means the album gets off to a stutter after a stunning opening, but abnormal service resumes as the title track ‘We Were Drifting On A Sad Song’ taking us into a galaxy of amusement arcade befuddlement.

This really is music that could only come from a small island in Denmark. Batz was raised in Bornholm, a place populated by wooden houses and round churches. You can imagine him looking out across the water, thinking of the mainland. The beats feel isolated, marooned, hammering out a cry to breakout of Bornholm and meet stuck-up latte sipping cosmopolitan women in Copenhagen. ‘Heavy Burden’ is the sound of a sparrow that’s gotten stuck in a Tesco carrier bag, trying to peck its way from the plastic tangle; in comparison ‘Gazing At The Moon’ is a tumultuous mix of balletic wonder and celebratory stomp.

The much commented on rabbit masks that Batz and company wear when performing live are apparently worn because of shyness (though some confusion came when last year they covered Art Garfunkel’s ‘Bright Eyes’, ending with an interpretive dance that demonstrated a group of rabbits plagued with myxomatosis). Ending with ‘The City Light Died’, - a song that doesn’t look you in the eye, a song that disengages - is a bit of a masterstroke. Whatever connection the listener makes is slowly burned like a big red candle that you cannot eat, as Sleep Party People withdraw back into the warren to ponder their next move.