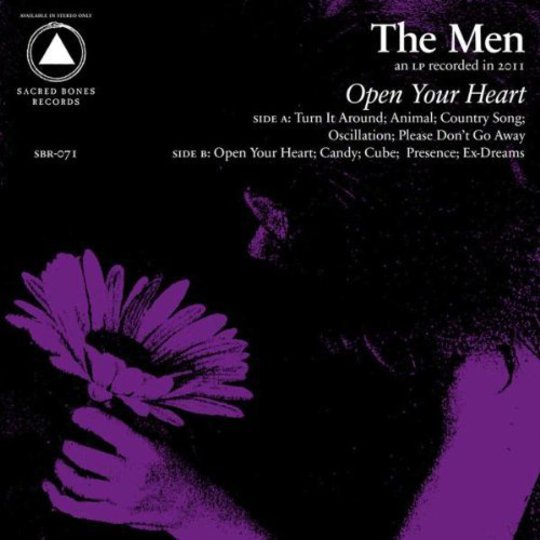 Reading the music press of late, it would appear that rock music doesn’t seem to have a present tense: it’s all dead riffs and archived solos, locked in a box labelled ‘classic’, covered in dust in the attic of a house full of techno, synthwave and electronica.

Or at least it was until last year, when the name The Men spread like wildfire on the back of Leave Home. Like the band's name, Leave Home was a blunt introductive exercise, part way between Greg Ginn-ian sludge and Generation X punk’n’roll. It was imperfect, as this website detailed at length, but it was definitely loveably imperfect. It fit right it with a whole mess of other noise which had been seething on the fringes of the underground: there were touches of Pissed Jeans-esque embarassment rock in Chris Hansell’s deadpan delivery, and a healthy edge of garage sleaze, all lacquered in ultra fashionable feedback mulch and dusted off with a few kraut-ish twirls. But most of all, it was a true ‘rock’ album; not blackened metal, nor lo-fi punk, nor a synth augmented guitar record. And in a year in which such records were few and far between, it was received rapturously.

Thus, hopes were high for the follow up, which landed a mere month ago, still on Sacred Bones (kudos for not selling out, The Men) but this time with a far higher profile. And incredibly for a record released a year after it’s predecessor, Open Up Your Heart could almost be a different band. Opener ‘Turn It Around’ would be mid-period Hüsker Dü, if it didn’t swagger quite so much like a vintage Rolling Stones track (if Mik'n'Keef et al had spent some of the last 20 years reading Our Band Could Be Your Life, rather than rolling in piles of money, admitting to snorting their deceased relatives ashes and dating Lolita-esque teenage models). ‘Candy’ is a Replacements cover in all but name. As for the title track, I honestly had to check that my iTunes hadn’t inexplicably skipped onto Buzzcocks’ Love Bites, so nakedly obvious is the lifting of the ‘Ever Fallen In Love’ riff (if you’re going to nick a Buzzcocks riff, at least steal a b-side your listener might not recognise). To say that it’s a jarring listen for those accustomed to The Men’s previous, erm, machismo, would be something of an understatement. Gone is the raw, snarling anger that drew in so many aurally-damaged fans such as myself: this is The Men indulging their inner college rock.

But it’s a sin to focus on what an album isn’t, rather than what it is. Open Your Heart actually feels most heavily indebted, in terms of format, to one of the weirdest records to come out of the Eighties ‘college’/Our Band Could Be Your Life scene: the Meat Puppets’ II. In the same hare-brained psychedelic manner as the Kirkwood brothers, the band cover an admirably large amount of ground with punk as a starting point. The result the first time round was one of rock music’s most enigmatic and inexplicable freaks, in album form. This time round, the results are more mixed: II was definitely a one-off success story. But if there’s a problem with Open Your Heart, it’s not that it’s timid, but that it’s overambitious. What’s lost in transit is the album’s personality: for a record with such an emotive title, it never really manages to develop an identity.

Notwithstanding the character void, Open Your Heart does become an increasingly enjoyable listen, with more than a few choice moments. ‘Presence’ and ‘Country Song’ are elongated, psychedelic country punk which fit the II mold perfectly, the former exploding delightfully into shamanic chanting and wandering space rock, while the latter burns out somewhat more languidly. ‘Oscillation’ bites on a Silver Apples reference, before morphing into a freewheeling seven-minute guitar waterfall: Neu! at their most Hero-ic. ‘Animal’ is slide-guitar powered junkyard garage rock, Hansell’s feral vocals mockingly chided by a girl-group chorus of “He’s an ani-mal!”.

The fact that this review is (perhaps lazily) peppered with comparisons should be telling. Open Your Heart reveals itself to be The Men’s own potted history of rock music in the twentieth century, rather than a bonafide distillation and re-construction of their influences. Yet, even if it’s over-seasoned with idolatry, there’s still an awful lot to like about this record, and more than a few moments to love. Even if it’s not perfect, Open Your Heart will sit happily on my (sadly) metaphorical record shelf, and be played happily, throughout 2012. It’s just as loveably imperfect as its predecessor. The only shame is that it isn’t more so.