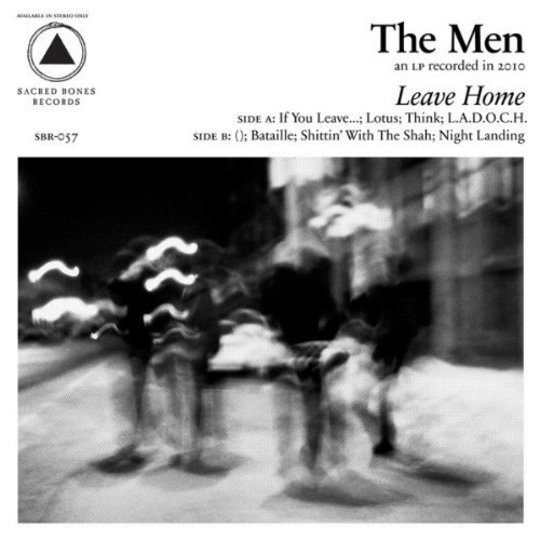 In a strange and slightly convoluted way, the second album by The Men relies on its weaker moments to give its stronger colleagues the pedestal they warrant. It’s not simply a case of making them look good by contrast, either – it’s a bit more complicated than that. Basically, Leave Home finds the Brooklyn four-piece excelling in one mode – the crashing, detuned and sociopathic nexus of noise and hardcore – and blowing hot and cold in others. Logically, this should suggest they’d have been better off turning in a full stint of genuflection at the altar of Greg Ginn and Michael Gira.

There are, however, an unmanageable amount of bands doing much the same at the moment: Pissed Jeans, Årabrot, Slices, FNU Ronnies, some British battery lickers like Drunk In Hell and Diet Pills. Why would anyone pick out a group with a goadingly blank Moebius-strip-of-irony name like ‘The Men’? (Especially when you, a box-ticking fucking PARAGON of political more or less correctness, are already wracked with conflict about the fact that one of your favourite recent strands of music is overwhelmingly a vehicle for white males to fly-tip their mystery anger.) Well, that’s where the other bits come in. They might not be to everyone’s taste, in some cases because they’re a bit meandering and underdeveloped, but they let the distracted dabblers know that The Men aren’t just another mob of panelbeating urbane sludge thugs. It also helps that this album is on the Sacred Bones label, which has ample indie-rock kudos and gets reviews in first-page-of-Google places like this website.

Leave Home, which came out about five months ago in the States, has edged the band to the point where they threaten to attain the global megastardom of, oh, No Age. This tells you little about the album’s ambitions, or lack thereof. ‘If You Leave…’, the opening song, begins with three minutes of pointedly aimless jotter doodles in Thurston Moore-ish tunings, before some galloping psychedelic punk breaks up the navel-gazing. Even then, there’s a toenail in the cocktail in the form of Nick Chiericozzi’s vocals, which sound like Layne Staley. In roughly the last half hour of his life. The longest song on the disc, it feels vaguely like an act of self-sabotage.

Towards the end, meanwhile, ‘Shittin’ With The Shah’ is a reverb-heavy instrumental that builds up to a broadly agreeable sub-Comets On Fire crescendo without entirely justifying its presence. ‘Night Landing’, which follows it and concludes Leave Home, adds a drum machine to its pat Stoogean sprawl, but in a way that leaves you wondering if, having used three drummers across the previous seven songs, they simply couldn’t locate another for the finale.

So, having established that the head and feet are meh to middling, let’s talk about the bits in the album’s torso. As Adrian Mole, would say, it’s offally good. ‘Think’, which also came out on a gravely limited 7-inch, is a frothy keg of rage – guitar solos that have almost nothing to do with the rest of what’s being played, a tip of the hat to modern powerviolence doyens like Mind Eraser, a clarinet because you didn’t expect a clarinet (there really is one, though). The Ginn/Gira altar I mentioned in the first paragraph is approached for ‘L.A.D.O.C.H.’, which is an utter archetype of the form: Black Flaggish to the point where you think it’s actually going to become a cover of their ‘Nothing Left Inside’, it degenerates into preposterous Swans-circa-1984 deathblows. “THE BRINGER OF EVERYTHING IS HERE TO STAY!” erupts Chris Hansell one final time, before coughing bathetically.

‘()’, rather than covering all of a Sigur Ros album in one song as you might expect, trades in destructive quasi-garage punk. Apart from the part where they allude to Spacemen 3’s ‘Revolution’ (“it takes five seconds to decide…” intoned over opiated repetition), you could envisage it on one of the earlier Trail Of Dead albums, where it would be one of the noisiest moments. Something similar can be claimed for ‘Bataille’, which Sacred Bones understandably chose to toss out to bloggers before Leave Home’s release, and which – in stark contrast to the Thurstonoodling earlier on – is like if Sonic Youth had ever managed to write a song with a hardcore backbone, but also the earworm quality of their setlist staples.

I mean, if you’re on here reading this, there’s a decent chance you like the rock band Sonic Youth and consider the previous a glowing appraisal. Rightly: ‘Bataille’s a great song. A whole album of it would feel kind of… a cop-out, though, even assuming they could consistently strike gold using that rough formula. Maybe it’s better if The Men keep on jabbing haphazardly into flesh, in case hitting the vein too often leads to an O.D. And, with the knowledge that no review on here this week will feature a worse metaphor than that, understand that you won’t end up playing this right through after long, but the gold parts of Leave Home are noiserock in excelsis.