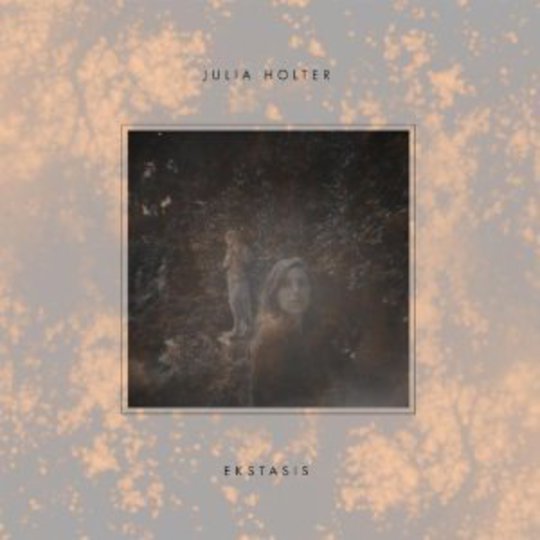 A searching and ambitious work, Ekstasis is Julia Holter’s second full-length release, following last year’s similarly singular Tragedy, which was based on an Ancient Greek play. A solo effort recorded for the most part in her bedroom and driven by Holter’s desire “to get outside of my body and find what I can’t define,” the result is as compelling as it is mysterious and expansive. It is a record brimming with detail; flourishes that unfurl three, five, ten listens in before lodging themselves in your consciousness only to surface when you least expect. It is that gorgeous, at times, that the “mythological reverence of that which is incomprehensibly beautiful” spoken of in the press release actually rings true. At its best it makes good on the Los Angeles musician’s assertion that music is “about putting your soul into it, not just being hip.”

This is important, for me, because if there is one thing often lacking in the predominantly electronic, bedroom-recorded music that has increasingly come to define the underground at this point, it is genuine heart and soul: something that ensures an album stands up to repeated listens and engages on more than just a cerebral, ‘man, is that crafted’ level. Ekstasis is cerebral, sure; influenced by arthouse French cinema, medieval isorhythm techniques and Holter’s classical training – it is superbly well-crafted too – but, crucially, it is playful and striking from the outset. Melody and imagery of crumbling, lichen-covered statues abound in the opening ‘Marienbad’, which shifts from reverb-soaked arpeggios and swooping multi-tracked vocals to insistent, accelerating beats before closing in a euphoric haze.

Ekstasis revels in the ‘open-ear decisions’ of its architect, winding its way along paths both sepulchral and ascendant, often in the same song. Tonal shifts that might have been jarring in lesser hands play out rewardingly and intuitively here: ‘Our Sorrows’ morphs from dreamy, blissed-out march into haunting, wordless ripples of vocal; ‘Moni Mon Amie’ from plaintive lament into something otherworldly. Holter’s voice, whether singing or chanting, harnesses these songs and graces them an assured constant presence, even as they meander far from their source. Songs like these – how their constituent elements converge and coalesce – almost demand to be pored over, and as she so rarely sings out, when her vocal rises and takes centre-stage (such as at the rough half-way point of ‘Goddess Eyes II’ or for pretty much the entirety of ‘In the Same Room’) it is all the more forceful given the general restraint elsewhere.

For all the unpredictability of Ekstasis, though – and it really is ‘pop’ music in the loosest sense of the word – it is accessible too, though it makes more sense playing to an attentive set of ears than it does on a busy morning commute. The most straightforward songs excepted, perhaps: ‘In the Same Room’ comes on all Eighties arcade synth, a gleaming, hook-filled meditation on the nature of memory, yet still dissolves into sampled whistling and gentle shards of noise. It sets the scene for the eight minutes of droning, ambient sound that constitute ‘Boy in the Moon’, which first tests then rewards patience bountifully.

Which is more or less true of the album as a whole. Holter has produced a very fine, fiercely imaginative record, rife with sonic experimentation and not lacking in heart (check the “I can see you but my eyes are not allowed to cry” refrain of ‘Goddess Eyes II’, lent gravity via its repetition, or the pleading opening lines of ‘Moni Mon Ami’).

Although it still occasionally feels like there is something distant about Ekstasis, something yet to thaw (chalk this up to its chilly aesthetic and Holter’s wilfully eclectic approach to her art), it is a genuinely enthralling listen. “This is not the quietness / This is the Ekstasis / This is not Ekstasis / This is the quietness” she sings, confusingly, on closing track ‘This Is Ekstasis’. It is a dense, fascinating jumble, a persistent bassline underpinning whirling vocals, crashing percussion, ragged breathing, excursions into free jazz and an extended breakdown. If that sounds a little heady, well. It is called Ekstasis, after all.