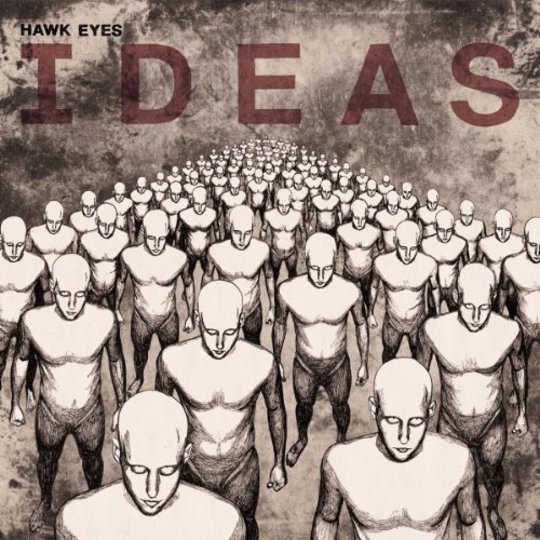 When bands experience a name change, it usually results in a pretty drastic transformation. Trademark issues meant Mookie Blaylock became Pearl Jam, On A Friday were forced to switch to Radiohead and Mammoth eponymised into Van Halen. Chickenhawk, on the other hand, became Hawk Eyes. It’s not quite as dramatic a deviation as previous rock alterations, but when you’ve already got a couple of releases under your belt it becomes a slightly bigger deal. Still, if you’re named after a Robert Mason book and can’t get the domain names as a result, what else can you do?

With that shift in name comes a noticeable development in sound, even from last year’s Mindhammers EP, also released under the new moniker. But don’t worry, Hawk Eyes have still got riffs. My word, have they got riffs. It’s just that with Ideas, they’ve brought some melodies to go over the top of them. At least now when you’re being aurally pummelled, you can sing along.

Although this decision to soften the vocal delivery may be a result of doctor’s orders for vocalist Paul Astick to tone it down a bit, it’s the best direction the band could have taken. Now, Hawk Eyes are no longer on the fringe of alt-rock supremacy; with Ideas they have secured themselves as genuine heavyweights of the genre.

The best example of the band’s new approach to composition comes courtesy of behemoth rocker ‘Headstrung’. Finally, monster riffs are matched by a pneumatic drill of a hook, determined to bore its way into the listener’s skull and nestle there for weeks on end. These memorable motifs continue throughout, with ‘Hollywood Sweatshop’ demonstrating the band’s affection for Mike Patton supergroup Tomahawk and producing one hell of a chorus in the process.

Ideas isn’t afraid of riffing its audience to death. But it also shows an awareness that for heavy to truly work, you need contrast with something, well, less heavy. Admittedly, the album’s lighter moments don’t offer much respite from the distorted assault, but they’re there. Just.

While there’s nothing verging on ballad territory, the doom-laden, Sabbath-esque breakdowns in ‘Witch Hunt’ and ‘Skyspinners’ are a welcome progression in the Hawk Eyes sound, but still only form one component of its multifaceted assembly. In fact, the band possess such a relentless cavalcade of riffs, it’s sometimes hard to know where one song ends and another begins. These subtle progressions and odd time signatures initially bring Soundgarden to mind, but, in some instances, Hawk Eyes push proceedings further into math-y Oceansize territory. More often, however, things move beyond the realms of sonic decency altogether, but this is where the band sound most at home: destroying, rather than massaging, eardrums.

It’s hard to see many albums topping Ideas this year for all-out power and intelligent aggression. It showcases a band realising their potential and expanding their sound across a number of different paths, but without losing any of the unwavering ferocity that made them such a potent force to begin with. In fact, were Ideas to convey only one message, it would be this: riffmageddon 2012 is here and Hawk Eyes are at the helm. You’d be well advised to get on board.