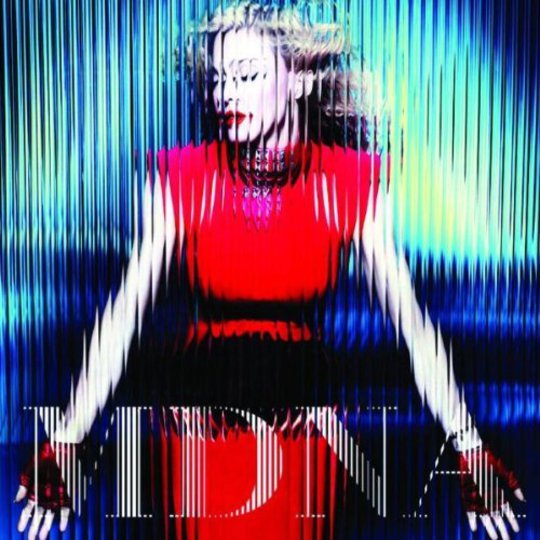 There’s a whopping great elephant in the corner of MDNA’s palatial electro-pop surroundings, so lets cut to the chase. Madonna, The Material Girl, Lady Gaga’s fairy godmother, whatever you want to call the most successful female recording artist of all-time, is 53-years-old. To Madge herself this number seems entirely arbitrary since she’ll continue to get into her hyper-erotic groove until the death knell tolls. To an audience who grew up idolising MTV’s star attraction, well, they’re less inclined to spend their Saturday nights cavorting around a super-club in various stages of undress. More importantly, they wouldn’t normally be buying into an artist who possesses such bountiful reservoirs of immaturity.

All of this goes someway to explaining the hotchpot group of producers hired to make MDNA magic. Madonna’s best records of late have come by virtue of sticking with one producer like William Orbit on Ray Of Light and Stuart Price on Confessions on a Dance Floor or at least a similar grouping like Timbaland and Pharrell Williams for the underrated Hard Candy. Although that latter offering turned out to be the eleventh best-selling album of 2008, its singles performed badly in a Top 40 already saturated with a wealth of urban pop. Madonna had sacrificed her position ahead of the pop curve for timeliness with mixed commercial results.

For her twelfth studio LP, Madge has drafted in chart-friendly DJs Martin Solveig (‘Hello’) and Benny Benassi (‘Beautiful People’), as well as her old pal William Orbit. Essentially, there’s something for everyone here, meaning it’s the dreary ‘Masterpiece’ which was picked up by radio as MDNA’s lead single rather than ‘Gimme All Your Luvin’ or ‘Girl Gone Wild’. Not that any of those songs best represent the glitching treats that can be mined from a patchy but occasionally inspired album.

At least half of this record represents the best work Madonna has put out in recent memory. The sampled choral chants and brash sentiment of ‘I Don’t Give A’ are irresistibly catchy on a track where the addition of Nicki Minaj makes complete sense. Especially when married to the Grade A sass being fired out at every which angle, “You were so mad at me. Who’s got custody? Lawyers suck it up, didn’t have a prenup.”

Not that we needed reminding but Madge remains at her best when she’s at her most provocative. Whether that’s commanding you to “hold me like your money” on ‘Love Spent’, letting rip with a firearm on ‘Gang Bang’ or gaily proclaiming her album’s narcotics-inspired title on ‘I’m Addicted’. Love her or hate her, these are the kind of songs you could only ever find on the album of singer who once persuaded Vanilla Ice to appear in her Sex book.

It’s when Madonna slips out of her eye-raising persona that MDNA veers into mediocrity. ‘Turn Up The Radio’ and ‘Superstar’ are synth-flavoured filler of the garden variety, while ‘I’m A Sinner’ tries way too hard to be truly convincing. Only the string-drenched ‘Falling Free’ manages to grasp a middle ground where restraint is married to some emotions that haven’t been drawn by caricature.

So, not unlike Born This Way, MDNA is a bit all over the place with moments of brilliance often stood right next to a hugely underwhelming counterpart. Where Gaga’s crazy got the better of her, it’s Madonna’s conservatism that drags her latest record down to the status of a ragtag collection. Sure, everyone will be able to pick out a favourite track but if the Queen of Pop can’t stick to a singular vision for her album then who else is going to?