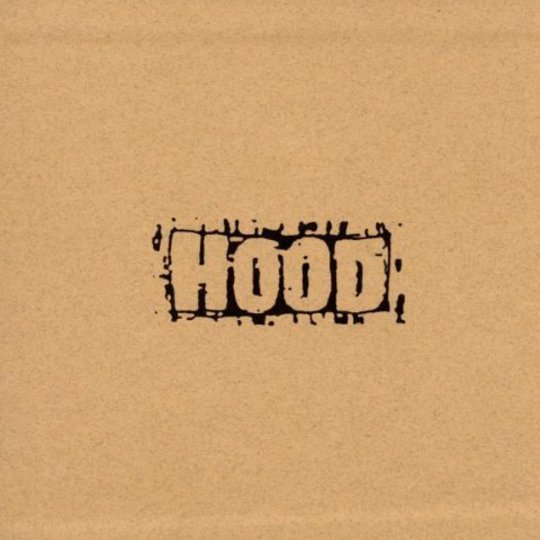 Hood have not released any new music for seven years, and while not formally disbanded may never reform. However, their workrate from 1992 to 2005, when they issued as-it-stands final LP Outside, Closer, serves as goodly compensation. Fans of this unassuming, quietly fierce Yorkshire band, brothers Chris and Richard Adams plus collaborators who come and go, have not previously been starved of their creative product. Recollected is a six-CD box set covering, if you like, the second phase of Hood’s career – partly so because they signed to Domino Records, previously releasing through minute bedroom indie labels, but equally because of clear shifts in their sound, influences and horizons.

Where once, their songs would invariably come in under two minutes, their Domino debut album Rustic Houses, Forlorn Valleys averaged nearly eight minutes per track. In place of earlier recording techniques – a grand word for the startlingly lo-fi blankets of hiss on most Hood records – came a precise and highly personalised way with a studio. While their Britishness was frequently cited, admittedly by others more often than themselves, some of their most rewarding music arrived through cross-Atlantic collaborations with American producers. Someone only half-observing Hood might be forgiven for thinking they presented their smallness, meek demeanour and lack of formal training as virtues; this would sell their splendid music hopelessly short.

The strict necessity of this box set is debatable. It costs £40 or so and features their four Domino studio albums, a compilation disc of the band’s singles for said label and The Hood Tapes, which is an expanded (from 13 to 24 tracks) version of a CD-R released in 2005, and is the only part of the package you couldn’t easily source for under three quid. More positively, everything on here’s been remastered – view it as finickity tweaks rather than outright repair jobs – and there’s a long essay in which writer David Hemingway waxes fanboyishly about Hood’s charms.

I bet my relationship with 1998’s Rustic Houses, Forlorn Valleys differs from his: I went to Glastonbury over a decade ago, stayed up for 48 hours, passed out in the open air while listening to a cassette of this album, woke up to find all my money had been stolen and haven’t knowingly heard the record since. In a more… considered situation, it remains a weighty and affecting milestone; the last album Hood would make as a de facto ‘guitar band’, but evidently straining to escape from these stylistic chains. Clarinet colours ‘Boer Farmstead’ like brushstrokes, while Chris Adams’ vocals swim in reverb, high in the mix where they might have taken the option to submerge them, embarrassed at their faltering timbre.

Rustic Houses... is more serious and doleful than anything Hood released before or after – probably due to a wish to extricate themselves from their goofy lo-fi origins – but it fits them like a glove. Rain is mentioned on precisely half the songs; drumbeats come in appropriate patters and splashes. It’s a very Nineties album, in that it shared a decade with Codeine, Slint’s Spiderland, Mogwai’s early recordings and their most consistently claimed influence Disco Inferno. It broods, and sometimes shakes with anger – the closing section of ‘Diesel Pioneers’, which is as raw and chaotic as Moss Icon or other emo bands I doubt Hood listened to – but is fixated on beauty and clarity.

The following Hood album, 1999’s The Cycle Of Days And Seasons, represents another stride forward into their own musical territory. Partly produced by Matt Elliott, at the time acclaimed for his impossible but great fusion of drum’n’bass and British dronerock as Third Eye Foundation, his influence looms over tracks like ‘September Brings The Autumn Dawn’ and ‘The Cliff Edge Of Workaday Morality’ – both of which have clattery, dub-paced drums and the kind of fuzzed-out samples that would qualify as hauntological. ‘In Iron Light’ uses one of dub’s enduring tropes – the crackle of old vinyl at booming volume – as its own looping rhythm, somewhat akin to a Philip Jeck set, and ‘Roads Lead Northwards’ is flat-out King Tubby genuflecting, all springy tape-echo rhythms and sawing, splintering pieces of melody.

Only on occasion do Hood’s guitars sound much like guitars at all, and when they do – the pensive strum of ‘How Can You Drag Your Body Blindly Through?’ – they’re eventually consumed by strings, feedback and FX. The Cycle… is a remarkably brave album by a band who had stepped outside ‘rock’ previously, but mostly in the form of quick, noisy squirts of annoyance. These compositions are grandiose and meticulously structured, and reward close listening. Hard to think who might have recently made comparable music – Peaking Lights’ 936 LP has notionally similar ingredients, albeit with a fairly different end product, and Forest Swords has a comparably unconventional yen for decayed dub sounds, but they don’t serve as replacements for an absent Hood.

Supposedly, this whole snazzy box is to commemorate the tenth anniversary of Cold House coming out, which it actually did in late 2001. It seems slightly improper to assign it its own centre of gravity – newjacks might assume it’s leagues above the rest of their catalogue, which isn’t the case – but it did get their best-ever reviews in the popular music press. There are still explicitly dub-informed tracks (‘The Winter Hit Hard’); fearsomely glum post-rock guitar and even recourse to relatively uptempo indie thrum (‘I Can’t Find My Brittle Youth’). It was the American hip-hop Hood had been listening to, however, that made Cold House a totemic release. Doseone and Why?, who were already avowed fans of the band, appear on three of the album’s ten songs, their chattery word salad fading in and out of defiantly digital beatcrunch.

It’s probably worth bearing 2001 in mind here: the two MCs were, at the time, primarily members of cLOUDDEAD, Anticon Records (founded by Doseone and Why? among others) had virtually no British profile, and it’d be a few years before it became shorthand for all that hip-hop purists detest about ‘undie’ rap. This doesn’t make Chris Adams describing their vocal style as 'thugging themselves all out on the mic' any less ridiculous, but suffice to say that their influence on the album is fully credible.

Give or take a few months either way, this was also the era of Akufen’s My Way, Techno Animal’s The Brotherhood Of The Bomb, the one album by pre-Postal Service project Dntel, and Kid606 not releasing much but being fucking everywhere. Fair to suggest it was a good time for being overwrought and getting away with it – Hood, let’s not fudge facts here, actually sing “By the coldest sea / I read your tear-stained words” at one point – and also for making electronic music that got lauded for not being danceable. 'This Is What We Do To Sell Out(s)', the furthest they ever travelled from their indie origins, clusters dense glitches together in what sounds like an homage to Mille Plateaux’s Clicks & Cuts compilations. In forging a link (grand gestures housed in minimal musical frames) between their earlier guitar-based work and this swiftly evolving strain of electronica, Hood made something that’s endured, despite being so of its time.

Over three years later Outside, Closer arrived. Although thick with collaborations, they were by Hood’s peers in the Leeds indie underground; there was substantially less effort to sail in new waters than on their previous three LPs. The payoff is that they never sounded more assured or sturdy, even when their imagery becomes almost unbearably bleak. Both of the album’s singles, ‘The Negatives’ and ‘The Lost You’, wrap themselves (albeit jarringly) around conventional melodic guitar pop. Keyboards are used more judiciously on tracks like ‘Still Rain Fell’; Chris’ vocals are noticeably more mellifluous than on past releases, duetting affectingly with Nicola Hodgkinson (of Boyracer and Empress) on ‘Closure’.

And after that it’s the last song on the album, it’s titled ‘This Is It Forever’, and to date it has effectively served as a parting shot (although the Adams brothers have both released plenty under various names). It would be reaching to view Hood as a ‘project’ with a planned trajectory and conclusion, but reasonable to see Outside, Closer as a consolidation of the strides they made on the three albums before it. Another album might have either recycled ideas, or had to be so different it wouldn’t have felt like Hood at all.

Despite releasing singles like a bomb would explode on a bus if they stopped, Hood have always felt like an albums band to me. As such, the EPs Collected disc doesn’t have as much emotional resonance, but it does have individual finery. ‘It’s Been A Long Time Since I Was Last Here’ glides on a metronomic beat and (sampled, I think) trumpet; ‘Ghosts By Japan’, my personal favourite Hood songtitle, unleashes collage and cacophony while wisely having a voice repeat the word “listen” in the melee. ‘Over The Land, Over The Sea’ hails from 2004, but in chopping up vocals into confetti, produces an effect decidedly similar to those Doseone guest spots. Certainly, by their time as a Domino band Hood were nearly always on – these are not the idle B-sides of the CD single’s boom era, knocked up to fill digital space, but fully realised compositions which, you imagine, didn’t quite fit on their adjoining album.

The Hood Tapes’ 24-song wingspan and recourse to gently zany titles (‘Driven Out By Angry Villager’; ‘Having The Loudest Hailer’) give the CD the feel of pre-Domino Hood. The unashamed straight-to-tape flubs and pared-down instrumentation cement this – it’s clearly intended as CD6 of the set, to be listened to once you’ve come to terms with the hermetic and emotionally raw outlook of the other five. In truth, hearing an older Hood album like Silent ‘88 will be a greater help – the way in which potentially stellar songs like ‘The Hurting World’ and ‘Maple’ just stop while in stride may seem bold, instead of stupid. That said, the trail from wobbly, aleatory strum’n’drone like ‘Sad Neck?’ or ‘You Shins Break My Heart’ to any other album discussed in this review is perfectly visible, and ‘Guess My Age’ is the compilation’s token pop song, in that it sounds a bit like The Go! Team.

The score below, should you inexplicably not have read the entire review, is for the music on the CDs – most of which is great and parts of which are among the most essential independent music Britain has ever produced. The validity of this being presented as a box set is something on which I could, at best, speculate. This music is ‘worth’ £40, although as I say you don’t have to pay that to legally acquire it; is Recollected being aimed, Led Zep-style, at longterm fans looking to replace their scuffed old copies, or are there actual young eager beaver post-rock crazies who’ll dive in and submerge themselves in six hours of Hood? Over and over again? Take it, and take as you will, from someone who’s spent the last fortnight reopening old wounds in this way: it will leave you drained.