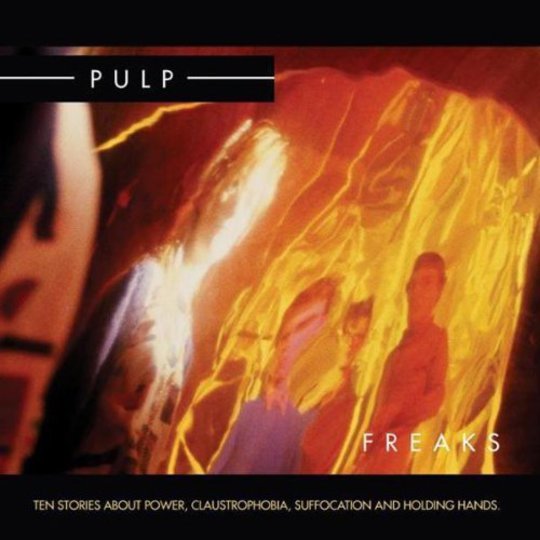 Among the perhaps dozens of us that have listened them, it’s almost become de rigeur to discuss Pulp’s first three albums in the context of the band’s later success as art pop giants of the Britpop era. With 1983 debut It this is fairly understandable given its frothy, lightweight pop aesthetic (but more on that elsewhere): 1987 follow-up Freaks, on the other hand, is an entirely different proposition, not to mention, Jarvis Cocker aside, an entirely different band.

Let’s be perfectly clear about one thing straight away though, and it pains me to say this as someone who has idolised Jarvis for many a year: Freaks is not a particularly good record. Rather, it’s an interesting aberration in the trajectory of Pulp’s sound. There’s no nuance in here, no room for interpretation: this is the band at their most bleak, staring deep into an abyss of hopeless despair, where misshapes, mistakes and misfits are raised on a diet of broken dreams and hearts rather than biscuits. That sense of the little guy winning out that would characterise Different Class is absent here, replaced by a sorrowful void: “Your soul just dried away/There’s no love left in your body/Standing empty forever/And colder every day”.

It’s telling too, that Jarvis’s voice has yet to develop that lustful warmth that was to be so appealing during the band’s years of success. He never was a particularly technically gifted singer, however here, without the sense of wanton intimacy it feels colder and raw. In certain places, such as on ‘The Never-Ending Story’, this lends a flat, atonal edge that occasionally grates, especially as the relentless murky gloom on the album makes him sound like something of a late bloomer into the cynicism of adolescence. Meanwhile the less said about Russell Senior’s two lead vocals the better; perhaps the only saving grace on ‘Fairground’ and ‘Anorexic Beauty’ is that the lo-fi, low-grade production that runs through and blemishes the entire album obfuscates him just enough that he isn’t too annoying.

On the bonus disc – for all intents and purposes 1994 compilation record Masters of the Universe less the 'sanitised version' of the self-titled single – it’s pretty well the same gothic-obsessed deal, although the inclusion of singles ‘Dogs are Everywhere’ and ‘Little Girl (With Blue Eyes)’ arguably takes the quality a notch above that of the main album. Here we get our first real sight of Jarvis as the oh-so-English wit we’ve grown to love, the working-class hipster’s Stephen Fry: “There’s a hole in your heart/And one between your legs/You’ve never had to wonder which one he’s going to fill/In spite of what he said” staggers drunk along that fine line between perverted, funny and tragic that would become the band’s milieu.

In short, there’s not a great deal here you could consider a landing light on the runway towards ‘Babies’, Different Class, ‘Common People’ or Glastonbury ’95. With its relentless despondence and goth-inspired guitars there are perhaps more parallels to be drawn with 1998’s nervous breakdown record This Is Hardcore than anything else in their career. The quite mad opener of ‘Fairground’ is something you might like, but not a lot; ‘Anorexic Beauty’, with its “Pastel-white features and high cheek bones, scarlet-blooded lips and deathly tones” talks of the girl of my nightmares: she could be ‘Sylvia’ without the wry humour. In other words Jarvis is developing his pithiness, even if the soon-to-be-characteristic wit remains cocooned inside.

Despite all of this, I can’t help but like this record. Perhaps it’s the empathy that every six-foot-plus music enthusiast with thick glasses and a penchant for art house pop feels for Jarvis; perhaps it’s the way that each chapter in Pulp’s career seems to embody a facet of the emotionally fragile geek’s personality that’s exactly 0.01 per cent as complex as he thinks it is. Or perhaps it’s just that, as a dyed-in-the-wool fan of the group and the singer, I find this curious record in the oeuvre of a curious band utterly fascinating.