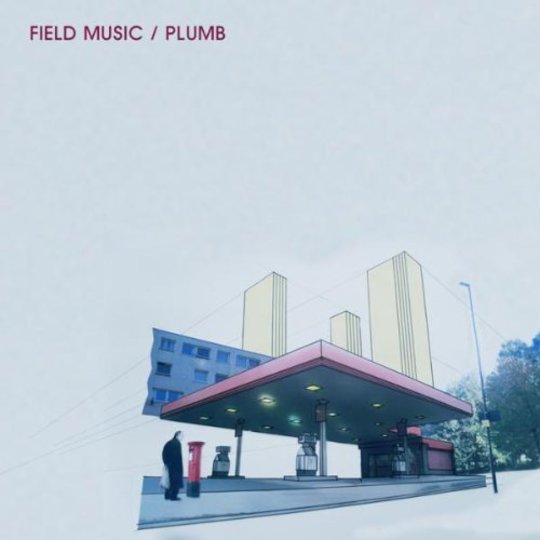 I must start this review with a bit of a disclaimer: before Plumb, I wasn’t that familiar with Field Music. I certainly knew of them – the Brewis brothers, their Sunderland roots, the intelligent angular-pop approach. I knew of their side projects, and I had their previous record on my MP3 player without ever really getting to grips with it. In my defence, it is a double.

However, from the instant I heard lead off track ‘(I Keep Thinking About) A New Thing’ on the radio before Christmas, I knew that now was the time for me to get to grips with Field Music. It might say a lot about my misguided approach to music, but I think it also says a lot about the latest record that the Brewis brothers have created.

For Plumb is indeed an ‘accessible’ Field Music album. ‘(I Keep Thinking About) A New Thing’ was a great choice for lead track, as it contains all of Plumb’s key ingredients: an instant, insistent riff, ideas piled on top of one another, and questioning, self-doubting lyrics. Peter and David Brewis deliberately set out to make a concise record, just as they were determined to make a double when recording Measure.

Many of the tracks on Plumb are fragmentary, made from unused ideas from the Measure sessions or earlier, polished up and glued together with little regard for conventional verse-chorus-verse structure. At first, it can be a little disorientating, particularly if you’re trying to match the tracklisting to what’s coming out of your stereo. Opener ‘Start The Day Right’ contains ideas for at least three songs, but is over in just over two minutes. The following track ‘It’s Okay To Change’ whisks by in under a minute, and you’re left wondering when it’s all going to sort itself out and get on with the proper business.

Given time though, and it all starts to become a little more like a Mackem ‘Day In The Life’, or like the musicals that the Brewis brothers have been talking about as a particular influence on the record. I’m not sure how many musicals would be based around existential crisis in a post-industrial north-east town, but you get where they’re coming from with a few spins of Plumb.

Handily, even the fragmentary moments are inventive, catchy little nuggets, while there’s also some absolutely cracking full songs that the album is built around. ‘A New Town’, built over the most minimal bass line, grows into an insistent, infectious bout of harmonic pop, while ‘Choosing Sides’ starts with some keyboard noodles before the clattering drums take us into something much more meaningful.

The line on which this track hangs is key to the album as a whole. As David Brewis sings "I want a different idea of what delicate means, that doesn’t necessitate any more useless shit", you can hear where he’s coming from and what he’s trying to wrestle with. Plumb is an album made by youngish men trying to work out what they’re doing in their particular worlds, passionate about politics, culture and their local community, but not sure what exactly they can do to make a difference.

That we’ve got a band asking such questions of themselves, whilst making some of the most thoughtful, intelligent pop in the country, should be celebrated. Plumb is a good bet for the end of year polls already, and it’s making me wish I’d started listening to the Brewis brothers a bit earlier.