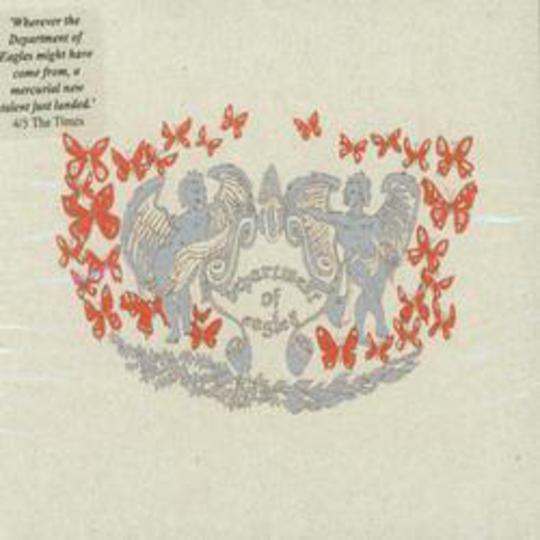 By the time this article gets published, and you sit down to read/skim/troll it, Christmas celebrations will finally be done and dusted, Jools Holland will have quietly gone away, and it’ll be 2012. So as per tradition, what are your New Year’s resolutions?

Shut up, you’re an idiot whose cynicism is exactly 0.001% as funny as you think; at least show some small ambition. Mine, for example, is to stop shoehorning Radiohead references and comparisons into every single piece I write for Drowned in Sound this year, which makes reviewing the reissue of Department of Eagles’ 2003 debut The Cold Nose a bit of a pain in the arse. Not that this will dissuade me from giving it a go, but just as a caveat, this really sounds quite a bit like Radiohead.

...or at least at first it does. ‘Sailing by Night’ for example, with chopped up drums and arpeggiated guitar, its rising energy and distortion, its pulsing bass and “ooooohh-ahhh” vocal bits is almost you-know-who-by-numbers (actually listen to it; it’s ‘Sit Down, Stand Up’ by the coda), albeit with a vocal line that inspires a kind of pleasant if lethargic calm as opposed to terrified paranoia. In a strange way the track is almost a microcosm of the album: the first half tranquil alt rock and minimalist lyrics – “I missed weekend shore / the time is summer / my truest amor” – that are romantic in the literary sense of the word, the second more urgent and up-tempo, with perhaps more sonic experimentation.

As the album moves on so it diversifies, until by the end the sample-heavy hybrid of electronic rock, folk and rap – honestly, ‘Forty Dollar Rug’ is a straight hip-hop song – you get something that sounds a bit more like UNKLE doing some sort of AM pop thing, with the likes of ‘The Horse You Ride’ foreshadowing the kind of world-pop sound Daniel Rossen would later explore further with Grizzly Bear. What I’m trying to say here, with my liberal use of genre adjectives, is that this is one hell of an experimental and ambitious record. Sure, there are the inevitable missteps you would expect from any band on debut: the aforementioned hip-hop fling is ill-advised, and in spite of its Tom Waits-echoing title, ‘The Piano in the Bathtub’ is something of a slow drag.

This reissue, now set for a belated UK release some four years after it surfaced in the US, also treats the listener to six bonus tracks. Two of these are the obligatory remixes of single-that-wasn’t ‘Sailing by Night’, three new tracks and a demo of album closer ‘Ghost in Summer’ clothes. The remixes sadly offer little variation and certainly no improvement on the wonderful original track (see my earlier caveat for why this is doubly frustrating), however the demo that closes this new edition is a pleasant showcase for Rossen’s vocal talents, if a little inessential.

Faring much better are the extra songs, which interestingly veer somewhere between trip-hop and dub-step; ‘Day School/Rooster’ is particularly impressive, and begs the question of why it wasn’t included on the original cut in lieu of one or two of the more straightforward offerings.

This is the key to The Cold Nose; those moments where the record does falter stick out like a sore thumb amongst a strong collection of incredible dreamy pop music. ‘Family Romance’ and ‘Noam Chomsky Spring Break 2002’ are two of the highlights; tracks which match the lofty standards the duo would later set with the sublime In Ear Park as well as with Rossen’s work with Grizzly Bear. It’s not so much that you drift off at the low points, rather that the highs jar you back to full attentiveness. Yes it’s flawed, but as freshman records go, this is an exciting template for a career of overwhelming prettiness.