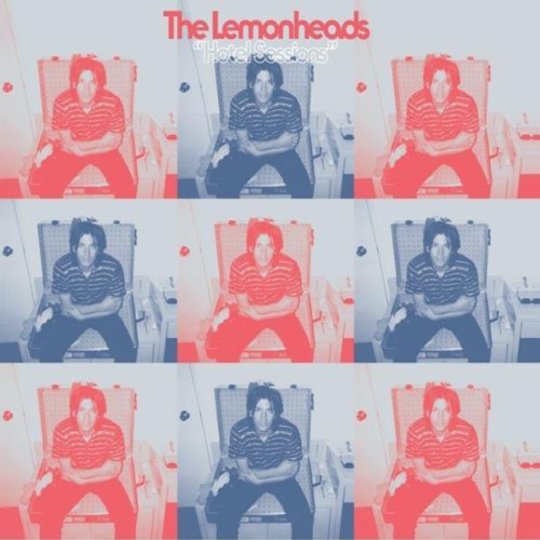 As the wave of early Nineties indie nostalgia crashes against the land once more, there was always likely to be a little driftwood deposited somewhere along the foamy shore. While recently this has taken a pleasing gnarled form in the terms of in-depth voluminous reissues, with crisper sound and bonus videos, sometimes what makes it back to the consumer is far from what most people would consider the finished product. The Lemonheads' Hotel Sessions is such a flotsam-like find, and it's release has left me quite baffled.

It shouldn't be that way. Many years ago, I would listen to Evan Dando solo shows on the radio and collect Lemonheads singles for the b-sides. In 1993, when this record was taped, there was very little I didn't love about The Lemonheads. Even today, they still get a decent amount of time on my stereo. ...Shame About Ray and Come on Feel... are both superb pop records, and this tape recording, made for their Australian agent of the time, captures some early takes of what would make the bulk of the latter album. In terms of timeline, it is slap bang in the middle of their best period. So what's not to love?

Partially, the fault lies in the recording. This was done on a tape Walkman, almost 20 years ago. To say that this sounds lo-fi is like saying the Great Wall of China took quite a bit of time to build. As a cassette user up until recently, I'm not averse to a little hiss, and some wow and flutter. But on a modern day release, even with the forewarning from the press bumpf, nothing prepared me for the 'SSSSSSSSSSSSSSSSSS' or the fuzzy vocals. I've only ever heard one semi-commercially released bootleg that sounded anywhere near this bad, and that was made in Chelmsford Prison in the Seventies.

The bulk of the problems lies with the performance itself, and the material chosen. Recorded in an all-night session, the laconic Dando sounds very sincere, and he plays with only a few minor slip ups. He's even in good voice, from what can be made out. But a couple of the songs aren't finished ('Great Big No' stops dead, for example), and he doesn't seem entirely confident in some of the material he's playing. He makes several self-deprecating statements before and after songs, perhaps already managing listener expectation. All of the weaker songs from Come on Feel... get aired, and all desperately lack the impetus that their full band performances have. The two new tunes include a Smudge cover and a Nic Dalton penned number that never saw the light of day. That's the collector bait, right there. The Smudge song, 'Superhero', is pretty good, and if a studio rendition exists, it'd be worth hearing. This version won't bear as many listens. The other 'newie' has already left my mind, sadly.

But really, the underlying problem with the album is that, technically, it should never have seen the light of day in the first place. As a bonus disc on a reissue, it would have had curio value. As a free download, it would have been charming. As a limited issue on tape, it would almost make some sort of perverse sense to collectors. But given that long term listeners will be shelling out actual money to buy it as a proper release... well, it's very close to being a fan milking exercise that will leave a sour taste in the mouth. For a band known for coasting along on good vibes and easy charm, it's about time they reminded us how excellent they were by putting out a worthwhile album, instead of offering up some half baked Nineties demo that harks back to a golden era when they actually could. Hotel Sessions has stopgap written all over it, but the real question is 'stopgap for what?'. Another dismal covers album? Another reissue, or perhaps a live recording? Is there another truly great work left in Evan Dando, or will his fingernails eventually scratch their way through the wood to the concrete under the barrel? Time will tell, and like many, I (still) want to believe. But now, like many more, I'll believe it when I see it.