Given To The Wild 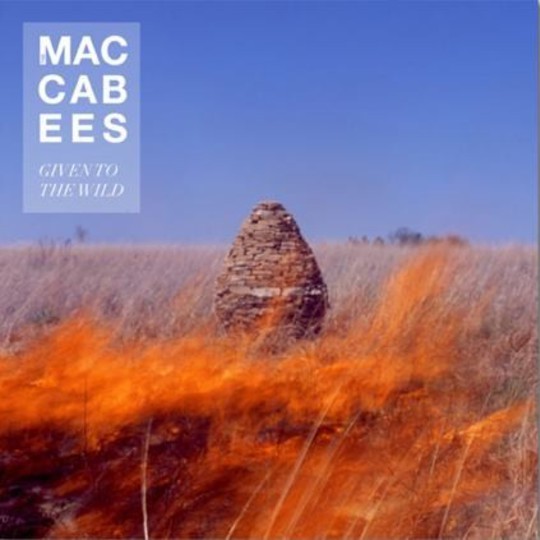 With far too many publications and artists that should know better repeatedly telling all and sundry about the supposed 'death of guitar based music', it's heartwarming to know not everyone is ready to pay their last respects just yet. Somewhat unjustifiably labelled as 'landfill indie' when such a tag is more befitting of those whose unoriginal wares followed in their wake (we're looking at you Bombay Bicycle Club and Two Door Cinema Club), The Maccabees have always set their stall out as leaders rather than followers. One step ahead of the game and several leaps in front of their contemporaries, if 2007's debut Colour It In was the sound of youthful exuberance than its follow-up Wall Of Arms demonstrated a strident maturity.

It's perhaps no surprise then that the near three-year gap between that release and Given To The Wild represents an even more significant development in the band's sound. At times it's hard to believe this was the same band that churned out the sprightly pop of 'Latchmere' or 'First Love', with most of the arrangements on Given To The Wild focussing on complex layers and brass segments while mostly clocking in at the four-and-a-half minutes mark or longer. When singer Orlando Weeks recently described the album as having 'a soundtrack quality' he wasn't talking in jest. Bold in intent and ambitious by way of execution, The Maccabees cannot be accused of resting on their laurels or taking the easy option, both of which should be commended.

Nevertheless that's not to say Given To The Wild reaches the heights of its creators' expectations. There are several moments here that rank alongside some of The Maccabees' finest songs to date. At 13 songs totalling just under 53 minutes, however, one suspects less could have been more here had the editing process been a tad stricter.

Their lofty ambitions came to the forefront last summer, with their headline set at Leicester's Summer Sundae festival containing no fewer than seven songs that would go on to serves as Given To The Wild's most prominent highlights. While such an audacious move is bound to attract a fair degree of criticism; and we here at DiS didn't hold back as far as that Friday night in Leicester was concerned, it served its purpose in giving those present an insight as to where The Maccabees' collective heads were at.

While the two minute title track intro echoes the opening credits to a film, the tranquil reggae-tinged 'Child' offers the first glimpse of a band seeking pastures new. "Would you give this back?" asks Weeks inquisitively while the White brothers' guitars chime effervescently in the background, eventually giving way to a brass section as the tempo quickens towards the song's outro. Likewise future single 'Feel To Follow' is already shaping up to be one of the record's centre pieces in the way 'No Kind Words' or 'Can You Give It' proved before it. Whereas The Maccabees of old would have opted for a janglier way out, 'Feel To Follow' builds into an effects-laden skyscraper not a million miles from the territories once inhabited by an adolescent U2. Better still is the piano-led 'Ayla', which mixes Muse-style grandiosity with the dramatic tenacity of Love's 'Alone Again Or'. "The wait is over" insists our protagonist Weeks as arguably The Maccabees' finest three-and-three-quarter minutes of music draws to a bombastic close.

From hereon in Given To The Wild proves to be something of a mixed bag. The Spaghetti western strains of 'Forever I've Known' - again recognisable from its live outings last year - coupled with the punchy "To have it all and still want more" refrain of lead single 'Pelican' contrast with the slightly forgettable melancholy of 'Glimmer' and Eighties-influenced 'Heave', neither of which manage to raise the rafters. 'Went Away' also dips its toe into murkier waters reserved for Radio 2 listeners and Q readers , unimaginatively aping Temper Trap's 'Sweet Disposition' if read by Chris Martin.

The processed beats which punctuate 'Go' reel in a huge chorus that screams 'radio friendly hit single!' from the rooftops while 'Unknow' dips its toe into Julee Cruise-type ambient shoegaze whirlpools. A major downside with Given To The Wild is its length, and as the penultimate 'Slowly One' creeps by sulkily, head in hands, one wonders what impact this record could have made had it been shortened by two or three numbers. 'Grew Up At Midnight', a song which closed the majority of their live shows in 2011, brings the album to a tumultuous close, lyrically reminiscing about childhood before seguing into a prog-heavy monster Keith Emerson or Rick Wakeman would have been proud to call their own back in the day.

Somewhat uneasy listening in places, yet sublime in others, Given To The Wild should rid The Maccabees of those 'landfill' jibes once and for all. If points were awarded for bravery, Given To The Wild would score 10/10 hands down. However, despite signifying a healthy progression in many ways, it simply isn't the stone cold classic The Maccabees are so desperately striving for.