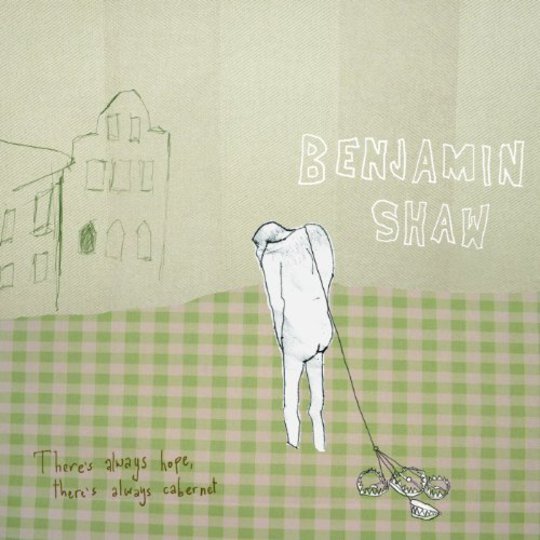 Forget about looping bellend Ed Sheeran and his godawful acoustic/rap combo – London via Blackpool’s Benjamin Shaw has a lot more heart. The proof’s with previous records Rumfucker and I Got the Pox, the Pox is What I Got: both open books of Shaw’s detachment from deadend jobs, his poverty in London and the resulting sadness, grief and gory metaphors - “…limbs in a freezer” anyone?

Debut album There’s Always Hope, There’s Always Cabernet then, is Shaw at his barest. Ramshackle and clumsy, logic would call it a mess. However, as Shaw moulds such disorganisation to suit the vacant and experienced themes, the finished product is nothing short of profound and charming. ‘Interview’ for example, focuses on a single ukulele which never seems to go anywhere. It’s a simple, yet powerful reflection on Shaw’s experience with part time employment (“I’ve got an interview tomorrow at ten / for a job I hate”). Meanwhile ‘Somewhere Over the M6’ follows the same trudging structure as it reflects on life’s duller moments (“Your eyes are blue and yellow / Your soul is yellow too / And nothing ever happens to you”). Bar ‘An Exciting Opportunity’ – a pointless four minutes of ambient background noise – Shaw’s musical setting paints a powerfully evocative picture of life which is both genuine and though-provoking.

He provides his wisest moment during ‘How to Test the Depth of a Well’. The ball is set rolling in an almost childish fashion: guitars ring delicately, strings creak as if they’ve been used a thousand times before, and militaristic drum rolls build to celebratory climaxes similar to those on Elbow’s Build a Rocket Boys! He manages to have a sly dig at politics (“And you shouldn’t blame it on the Tories / Even if they’re vile”) whilst giving an insight into life: “But you shouldn’t waste your time on living / If there’s nothing in it for you / And you shouldn’t give your heart to Jesus / He’ll only turn it blue.”

As Shaw returns to his roots, the LP’s richest moments surface. Nautical horns and crashing waves sound throughout penultimate track ‘Home’ – no doubt a reference to his native Blackpool – where he solemnly reflects: “It’s dark outside and winter’s here / Despite it being June / Seven hours till I see her / Should have stayed at hooOoome.” It’s a reminder that some of the most powerful emotions can bloom from the simplest of raw moments, and Shaw is an expert at crafting just those instances.