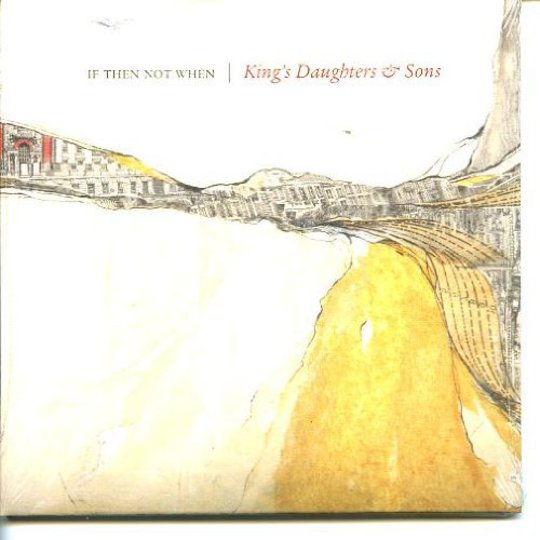 The last time Chemikal Underground flirted with supergroups it was to allow members of Arab Strap and Mogwai to record a cover of Atomic Kitten’s ‘Whole Again’. Ten years later and they’ve found one ready formed: King’s Daughters & Sons, a five-piece from Kentucky built from the remains of For Carnation, Shipping News, Rachel’s and Shannon Wright. Not to be confused with Sons and Daughters - another ex-Chemikal Underground affiliate - KSAD are solemn storytellers, solemn enough that no amount of disco/glam production could make them as marketable as their namesakes. If you haven’t got a thing for bereaved Country and Western acts, or if a six-minute Samaritans’ transcript set to slowcore doesn’t excite you, you are not part of the demographic.

Those sticking around are in for a treat, as If Then Not When reaches the quality you’d expect of a November Chemikal Underground release: wintry, beautiful… basically the Delgados on an iced-over dirt trail. Michael Heineman and Rachel Grimes have all the harmonies their frontiersman music demands, and when the guitar/bass/drums climax in time with them, the results are as sweetly morose as you could hope for. ‘Dead Letter Office’ tells the story behind the band’s name; a sludgey hymn to the dirty south that feels like Hope of the States when they still had sackcloth promos. “Such a lonely ride in the saddle out of town,” howls Heineman, his hoarse roar propelled by a tortured rock-out. Grimes shows off her range on ‘Arc of the Absentees’ where she impersonates 25 per cent of the Corrs, cooing gently in a Gaelic accent ”Try and recall a time when we all held a steady course / Before we were brightful and indifferent”. When both singers come together for the swirling ‘Anniversary’, the atmosphere jumps up ten places. A tale of botched wedding, exploding whiskey stills and Billy Lyons, a patsy in a small town assault, it features the same eerie acoustics as Isobel Campbell’s Gentle Waves; all carousing choruses and delicious seasickness. Heineman cleverly twists it into a kidnapper’s jingle by adding the line ”In the kitchen, whiskey-drunk / I pray to someone else’s god that you’ll keep quiet…”.

The only drawback is the King’s Daughters & Sons formula comes heavy on working out. If Then Not When is eight tracks in 50 minutes, taking up to two songs to reward you with a hook, so if you don’t like the way one song is going, prepare to switch to cruise control. That may not be a problem for Chemikal Underground regulars, but KDAS’s plodding is unlikely to attract newcomers who haven’t heard of either the label or the four parent bands. Drifting from post-rock to hillbilly swing should combine fans, but for every mournful daydream that works in a nine-minute folk loop (‘Lorelei’) there’s a freak instrumental like ‘A Storm Kept Them Away’. Some might appreciate the break in introspection - after all, there’s enough soul-searching on If Then Not When to power an event-level séance.

The band’s fluidity soon sinks in, and the record gets tighter the more times you play it. To fully-fledged post-rock fans the pauses/buildups on this record are small fry, and are met with some very high-quality peaks. Dip into the deflated country of ‘Sleeping Colony’ and you’ll discover a dark, dark requiem for ten-gallon hats; the band owning up how they were donated their instruments instead of slaving for them. This kind of bluntness is the band’s key ingredient: they’re five musicians who don’t feel like a pop band obtaining a dressing-up box of denim. In spite of their dithering they’re honest, and the stories spun on their debut are nasty, colourful old wives’ tales. Heineman’s young Johnny Cash impression is the gift-wrapping. It’s a strange kind of earthiness, ex-band members writing dirt tunes that mirror the Man in Black, and as a supergroup they more than qualify. In fact, any more super and they should get a cape fitted, move to Metropolis and fight crime.