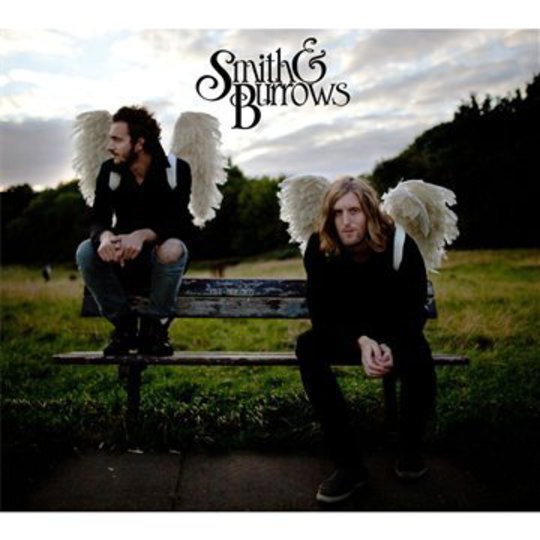 Even at British indie’s Noughties peak, it’s doubtful anyone was crying out for a Christmas-themed side project from the lead singer of Editors and the drummer from Razorlight. Such is the perverse timeliness at which Smith & Burrows have chosen to unveil their collaboration, The Guardian couldn’t resist titling its news story for their debut album’s announcement ‘Christmas treat or Halloween joke?’.

To answer the question, Funny Looking Angels is a yuletide treat and there’s no mistaking it. Just as She & Him’s Christmas album seemed like a perfect fit until you actually listened to its overly rigid schtick, the Smith & Burrows combination is supple and distinct in a way few would have imagined. That’s not to say neither of the pair have ever written a decent tune before, but to casual onlookers both seem fairly stuck in their roles of morbid crooner and twee electro-pop champion.

In terms of reaffirming such stereotypes, opening the record with Smith on lead vocals delivering a colossal, organ-laced rendition of ‘In The Bleak Midwinter’ was perhaps not the best choice. Still as a mood piece, this white winter hymnal works well to tee up a picturesque scene of downbeat but highly melodic tracks. Though a direct Simon & Garfunkel comparison may be a bit much, the same emphasis on bittersweet harmonies and flexible song arrangements applies to an album of original tracks and well chosen covers.

Bar ‘The Christmas Song’ and its inimitable “chestnuts roasting on an open fire” cheer, most of the tracklisting for Funny Looking Angels is fairly obscure in its outlook. ‘On & On’ by Britpop footnote The Longpigs gets its scuzz entirely stripped away to reveal the crystalline ballad at its core. The cold synths and Afro-Caribbean drums of Black’s ‘Wonderful Life’ are swapped for some delicate acoustic strumming and a pounding kick-drum beat. Even the title track, borrowed from cult Birmingham band Delta, is tinkered with in order to downplay its ramshackle twang and upscale the interlaced vocal hook at its core.

While this wealth of covers is impeccably executed for the most part, it does mean the number of self-penned offerings on show is regrettably slim, especially when you include the instrumental interlude ‘Rosslyn’. This is a shame since ‘As The Snowflakes Fall’ and ‘This Ain’t New Jersey’ capture the album’s outlook of somber festiveness just as well as the tunes which have been drafted in to fill the songwriting gaps.

This dearth of original material may form the main sticking point for Funny Looking Angels but it also plants that tantalising seed of what might have been. Though few would have predicted this unlikely pairing and even less would have actively willed it to happen, the fact is that Smith & Burrows have forged a handsome partnership. The quiet clamour for a second record starts here.