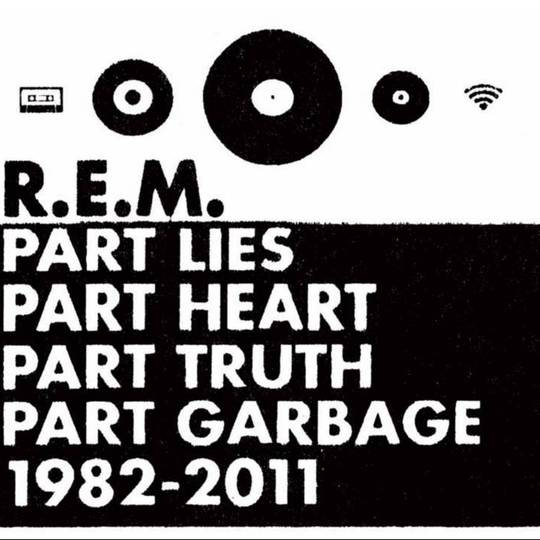 There are a lot of oddities about the thirty-first and final year in the life of the indie rock band R.E.M., not least the fact that after barely promoting their fifteenth album, March’s Collapse Into Now, Mike Mills and Michael Stipe have just wound up a sort of posthumous press blitz to talk up Part Lies, Part Heart, Part Truth, Part Garbage, the career-spanning best of that was announced concurrently with the band’s split.

Emerging just in time for Christmas, scant few months after CIN (and clearly considerably better supported by Warners), with the last three slots given over to the obligatory new tracks, there's reason to look upon Part Lies, Part Heart, Part Truth, Part Garbage as a last, opportunist payday. And yet... this is really is the first and only R.E.M. compilation to join up the band’s IRS and Warners years; at 40 tracks in length, it hardly condenses their long and varied career into The Hits; worthwhile programme notes from all four members of the band suggest they weren’t exactly doing this under duress; and much as the tracklisting feels flawed in places, it’s fairly obvious from some of the wackier choices that the band were heavily involved.

The most important thing to establish is that most of this music is extraordinary and that the first half is nigh on faultless. The IRS years are covered in the first 13 songs and you’d have to be a bit of a tool to seriously grumble about with the selection, a graceful journey from the yearning alt.country weirdness of ‘Gardening at Night’ though to the blazing fires of ‘Finest Worksong’. The fact that for six years R.E.M. were just churning this stuff out – the haunted ‘So. Central Rain’, the swellingly beautiful eco ballad ‘Fall On Me’, the savage ‘The One I Love’ – is just extraordinary. You really need to immerse yourself Murmur or Fables of the Reconstruction or Document wholesale to quite appreciate what a trip this band took, but casual fans hearing this early music for the first time ought to have their jaws appropriately dropped.

As we enter the Warner years, Green feels oddly over represented – the incendiary ‘Orange Crush’ is essential, but piling on all three of the album’s bubblegum pop ditties (‘Pop Song ‘89’, ‘Stand’, ‘Get Up’) is a touch too sugary. But Out Of Time is just about perfectly covered in just three tracks: cryptic, feverish masterpiece ‘Losing My Religion’, luminously excessive waltz pop oddity ‘Shiny Happy People’ and the burning, Falkner-esque stream of consciousness of standout album track ‘Country Feedback’. With Automatic for the People’s oddly moving nonsense pop romp ‘The Sidewinder Sleeps Tonite’ sneaking in at the end, disc one is a slightly saccharine but still more or less faultless account of REM’s incandescent ascent to the big time.

It’s disc two where shit starts to get a bit weird. After spending a little more time with the peerless Automatic…, the next five albums - Monster, New Adventure in Hi-Fi, Up, Reveal and Around the Sun - are dispatched with in just six tracks. Boiling the sterile ATS down to just the heartfelt ‘Leaving New York’ is one thing, but allowing over a decade of REM’s career to drift by in a brief flurry of melodic pleasantness is disappointing. ‘Electrolite’, ‘At My Most Beautiful’, ‘Imitation of Life’, non-album single ‘The Great Beyond’... they’re all lovely, but there’s little grit or weirdness, no hint of NAIHF’s blasted expanse or Up’s clockwork lullabies. Certainly the absence of the folk drone monolith of ‘E-bow the Letter’ - NAIHF’s astonishing lead single and a top five single ferchrissakes – is pretty outrageous. It strikes me that despite brazening it out for a few years, R.E.M. were pretty stung by the decline in US popularity that ‘E-bow…’ ushered in, and that this compilation essentially favours the records that did the best in the States.

Certainly the band’s last two albums - frequently referred t as their 'comeback' on grounds of their popularity in the US - are given as much room as the preceding four. The two Accelerate songs are deserving enough, the indignant ‘Living Well Is the Best Revenge’ spewing out like a plume of lava, while ‘Supernatural Superserious’ is gruff and cuddly as a polar bear. But a trio of CIN tracks seems wildly excessive, considering what was missed off (not to mention the fact they seem pretty arbitrarily chosen). Ditto the presence of three likeable but very album track-ish newbies: the gentle ‘We All Go Back To Where We Belong’ and ‘Hallelujah’ sound rather like superior Reveal outtakes; ‘A Month of Saturdays’ is sprightly, plaintive robopop that feels charmingly inappropriate on a last will and testament.

Anyway, quibbling about the tracklisting of a best of that contains at least 30 songs of unimpeachable brilliance seems a bit dick-ish. But I can’t help but feel that the love and effort that’s been poured into portions of Part Lies, Part Heart, Part Truth, Part Garbage are slightly undermined by the feeling that other bits have been chucked together without a huge amount of thought for the band’s legacy. Maybe that’s apt, considering the title, but conversely much of the second half really does feels like band or label have tried to airbrush out the stuff the Yanks didn’t like so much. This is very good, but it’s not definitive - but perhaps R.E.M. just aren't that sort of band.