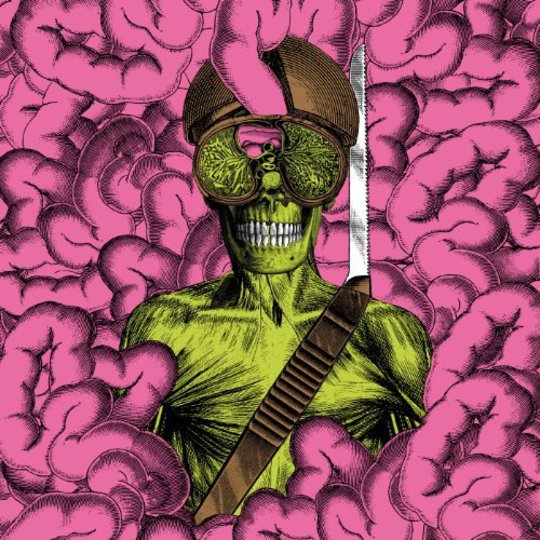 There's something reassuring about knowing that a man like John Dwyer can still exist. He follows on in the lineage of the garage rock forefathers Iggy and Roky - completely unpredictable in his performance, most likely the maddest man in the room. If he's not busting amplifiers or smashing ceilings with a guitar, he's busting chops. Of course, that's the caricature, the bristling imprint of the Wild Man coloured in with a few florid words. In reality, Dwyer is a more normal cliché, the hardest working man in rock and roll. Every year a record or two, on the road with Thee Oh Sees until the tires pop and the axles fire sparks across the road.

Which brings us to Carrion Crawler/The Dream. Having sat around with it for a few weeks, there has been only one conclusion I can come to. It's a well recorded, well played effort, and it nestles into genre expectation very nicely. But weirdly, with one extremely notable exception, the songs are predictable and average. In a live setting, they'd be doubtlessly more interesting. But on record, they are more rock and roll songs jumping onto the giant pile of fairly good recordings you won't remember. 'Chem-Farmer' is the drabbest by far, a workaday instrumental that seems to go on forever, and it left me nodding out more than once.

But, there is one number that lifts the album by its very presence. 'The Dream', unsurprisingly the emphasis track on radio and online, is very impressive indeed. Held together by mania, white hot drumming and a creepy keyboard line, it is propelled by the elasticated urgency of a man trying to get a dream down on paper before their conscious mind erases it. Even though it clocks in just shy of seven minutes, that time seems to pass in a flash. This level of impact is usually the preserve of their live shows, but seems to have made the jump. It's so good that the listener, while reaching towards repeat, is left to wonder why the rest of the album couldn't have been more like this. Perhaps with his intensive workload and frantic release schedule, Dwyer has been spreading himself a little thin. Or it might even be possible that 'The Dream' would have dwarfed any album it was placed upon. Either way, there is still a little satisfaction to be had here, but more than a notion that there was a better album to be had than the one on offer here.