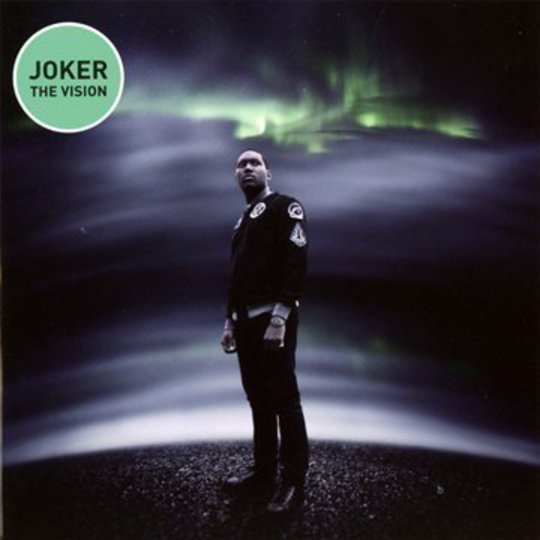 Joker’s debut album practically lumbers onto your MP3 player such is the weight of subtext surrounding it. As one of dubstep’s leading lights, this Bristolian producer turned many a head with his crispy bass music and fondness for 8-bit video game soundtracks. His early releases on Hyperdub and several other vanguard dance labels even saw him anointed '2009 king of bass music' by XLR8R Magazine.

Now joining Zomby on the previously alt-rock addled 4AD, Liam McLean finds himself trapped in the classic Catch-22 dilemma. To stick with the rapturously received beats of ‘Digidesign’ and ‘Gully Brook Lane’ or risk alienating your fanbase with some new R&B infusions? On The Vision, Joker tries to have his cake and eat it by loosely splitting the album into two halves. One without guest vocals for the purists and one for those willing to embrace a potential crossover LP.

It’s an imbalanced approach which deadens the album with a frustrating uncertainty in where its creator’s talent lies. Both 'Tron’ and ‘My Trance Girl’ prove woozy synths and fizzing drum beats are still something Joker does very well indeed. So much so that he could have easily played to a home crowd for the entire album without bruising his near-pristine image. ‘Milky Way’ and ‘Level 6’ also sketch out the basis for an album of glitching electronica with a Mario Kart-shaped heart, an unrealised counterpoint to Darkstar’s cold R-Type cool.

“I thought ‘Fuck it, when it comes to the second album I’ll think of one idea and do it properly,’” remarked Mclean, tellingly, in a recent interview with The Stool Pigeon. Be this through a doubt in his own abilities or a genuine restlessness, a philosophy that would have paid dividends on a series of 12-inch singles and EPs makes for an undeniably messy full-length record.

Despite the dearth of coherence attached to Joker’s collaborative tracks, they do at least triumph in isolation. Following from her magnetic turns on SBTRKT’s self-titled debut, Jessie Ware delivers a raucous squawk on ‘The Vision’. Danish synth-rocker Silas lends his booms "I can take you out" on the deliciously coarse ‘Slaughter House’ and Jay Wilcox adds a chilled West-coast croon to ‘Electric Sea’. That’s not to mention the grime-flecked ‘Back In The Days’ on which Buggsy, Shadz, Scarz and Double (KHK-SP) all chart their hardened transitions from street urchins to boisterous bedroom rappers.

While it's hard to critique The Vision for its scattershot successes, as a whole the album is just too erratic to have any sort of lasting impact on formerly ardent fans or casual admirers. Rather than listening to the record in its entirety, they’ll end up cherry picking their favourite Joker from a pack of wildly different cards.