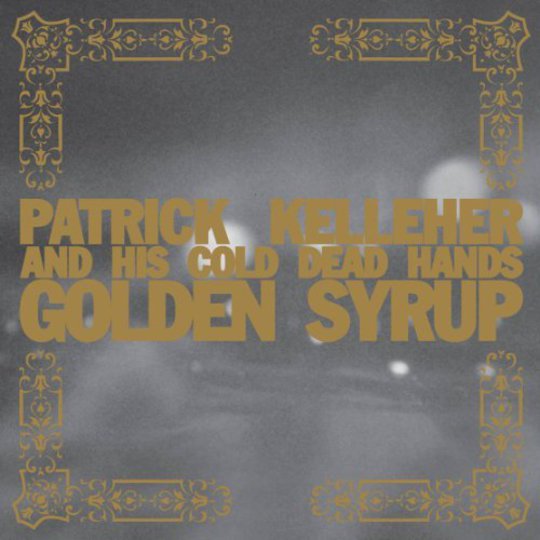 Irish songwriter Patrick Kelleher crept by almost unnoticed in 2009 with his debut album You Look Cold; indeed those that were shrewd enough to spot the release had to look harder still to reap the aural rewards that repeated listening eventually showed in abundance. A bleak album, its production hinted at a world of great scope hidden behind a translucent barricade, as though the listener was peering from the kitchen window down to the garden shed where Kelleher worked, muffled explosions going off inside. Only on the stripped down ‘I Am Eustace’ did he fling open the door and stroll up the garden path, acoustic guitar hung around his neck.

Two years on and Golden Syrup sees – to milk a metaphor - the shed knocked down, an outdoor Jacuzzi built in its place and the front doors of the house flung open for and sundry to enter; well, sort of. The low budget production is still in place, a pervading hiss touching the edges of the album’s ten tracks; yet where amongst that he used to bring a myriad of different sounds together as though constructing a collage (among the 32 instruments listed in the liner-notes of his debut included a condiment jar and a door,) now he seems to have settled on a far more rigid instrument set, not least due to bringing in four-piece backing band His Cold Dead Hands.

It does work, though Kelleher perhaps cuts a less interesting character as a result – a man who in his roundabout way at times appears to have gone about chasing the likes of Ariel Pink, Yeasayer and others he’s shared a stage with since 2009, as though seeking to join more celebrated followers of the retro-pop zeitgeist rather than pushing his own personal envelope further. That judgement’s only to be made though if we’re bemoaning the fact that an artist has had the grits to conclude that he’s finished with the trial and error nature of his experimentation with belief that he’s found the results that work best for him. As Golden Syrup pushes towards its finale it becomes clear that, aside from a couple of slips, his choices have not been misguided.

The weak moments come at the very beginning: not the best place for them to occur, with a threat of the die being cast the result. ‘Miracle Candle’ is an uninspired opener, an oscillating electronic thread marrying drum machine claps that lack the desired punch needed to match the track’s tempo; only some highly cheeky guitar shredding stolen from the vaults of Twin Shadow saves the day, and by the third song ‘Seen Me Blue’ the newly expanded group still don’t really feel like they’re on track. At least, though, the derivative lo-fi Eighties pop has morphed into a cut-price Talk Talk, with gentle drones pulling the beach pop into more murky depths.

It’s when turning to a darker palette, which they do, mercifully, on the minimal post-punk of ‘Too Many Harsh Words’ that The Cold Dead Hands prove their addition to the ranks is a worthwhile one; the track bristles with one-part early New Order staring-down-a-barrel bleakness and one-part hushed Alan Vega-doffing vocals, taking the former influence further onto the more delicate ‘Broken Up Now.’ From then on nothing ever completely escapes the shadows; ‘Contact Sport’ gives the impression of attempting to radiate some trans-Atlantic hypnagogic vibes, but the refrain of “we make love naked on the floor” sounds more sinister than hedonistic, and it takes a step into the overly saccharine toy box pop of ‘Strawberry Dog’ to escape the gloom.

It’s ‘I Don’t Remember’ that truly stands out, a slow building slab of gothic foreboding that sees Kelleher drop his gentle delivery for a deadened spoken word section, commenting “the sweat turns on my skin” as the album’s first real sonic abrasion rears, great plummets of sweeping noise flitting like ghouls between the constant bass line. It’s a sigh of relief as much as any, Kelleher for a brief while there looked to be eschewing the individual qualities that marked him out on his debut album in lieu of a more fashioned sound. Ultimately however it turns out that Golden Syrup is the work of the sort of artist who just can’t quite leave the itch that reflects his more exploratory side alone. For that we should be thankful.