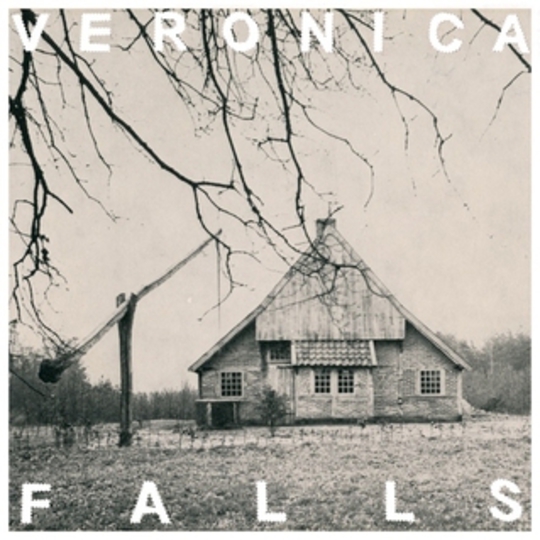 By definition or by some unexplainable quirk of fate, Veronica Falls seem to have found themselves lumped in with all things ramshackle, perfunctory and twee. Maybe their lineage goes towards aggrandizing that assumption, what with 50 per cent of the band having served time within Glasgow's incestuous independent scene. Their name too may give the impression of a thirtysomething du Maurier obsessed, pinafore dress and cardigan-clad librarian. However, the subject matter and coarse arrangements of their songs tell a different story entirely; C86 revivalists they most definitely aren't.

Having disbanded the rather inappropriately named Sexy Kids just over 18 months ago, guitarist and lead vocalist Roxanne Clifford and drummer Patrick Doyle headed south to London, and picked up fellow guitarist James Hoare from the wreckage of indie also-rans Your Twenties along the way. Although previously untutored musically, Marion Herbain took on bass duties and the rest, as they say, is history. And what a whirlwind flight it's been.

Signed to a label on the basis of a demo recording on MySpace, added to Rough Trade's Indie Pop compilation soon after followed by several festival bookings and a fast-growing reputation as an exciting live outfit, Veronica Falls have matured as a band in public without losing any of the vitality that made them an endearing prospect in the first place. If anything, Veronica Falls holds court as a fitting, and largely flawless document of those embryonic years, collecting what are (give or take the odd one) pretty much the first 12 songs the band sat down and wrote. It's to their credit then that nothing here sounds out of place, or indeed falls into the category marked 'filler'. What's more, there's very little here that anyone familiar with either the band's previous releases or live shows will be unaware of, which makes it all the more refreshing that when pieced together, Veronica Falls sounds like a professionally recorded variant of their normal set.

Of course none of this would matter one iota if they didn't have the songs to back it up with, and Veronica Falls have them in abundance. Opener 'Found Love In A Graveyard', re-recorded and re-mastered by Guy Fixsen, previously renowned for his work with My Bloody Valentine, Slowdive and Laika among others, sets the scene in dramatic fashion. Drums pound, guitars shimmer and build elegantly while Clifford delivers cautionary lines about "clinging to a dream so true, falling for a ghost like you." Haunting to the bitter end, there's a slight nod to The Velvet Underground here, maybe a touch of The Violent Femmes there, but ultimately Veronica Falls have adopted a fairly distinguished sound of their own.

'Right Side Of My Brain' will also be recognisable to those that sign up to mailing lists, having been issued as a free download a while back. Here in the context of the album it shows a more diverse nature to the band's knack of fusing Sixties style girl group harmonies with adrenalin fuelled punk rock. Perhaps the nearest comparison to the much-maligned C86 era they shun would be The Flatmates, a Bristol-based four-piece of similar make-up and demographic whose star shone brightly during the mid-to-late Eighties. Certainly the unerring flow between harmony and aggression that punctuates 'The Fountain' and subtle jangly meander 'Misery' aren't a million miles away from the aforementioned's 'I Could Be In Heaven' or 'Shimmer', structurally at least.

Delve deeper, however and there's so much more going on here. Aside from the despair-laden flavour contained in many of the songs, Veronica Falls clearly owe much of their musical palette to the likes of Love, Jefferson Airplane and The Mamas & The Papas, a point made by Roxanne Clifford in one of the band's earliest interviews when declaring their main source of influence to be the Sixties (one of their earliest recordings being a cover of Roky Erickson's 'Starry Eyes'). Recent single 'Bad Feeling' demonstrates the point succinctly, rearranging Arthur Lee and co's 'Alone Again Or' for the T2K generation via a dose of back-to-basics rock and roll.

Indeed what Veronica Falls aren't trying to do is reinvent any kind of musical wheel. Instead, they're living proof that channeling the spirit of one's influences into a modern day approach can be conducive to some of the most current sounding music around. If 'Stephen' sounds like a bedsit paean to the boy down the road, the pulsating suicide note that is 'Beachy Head' and similarly desolate 'All Eyes On You' restore parity for a band whose outlook is anything but an idyllic garden of buttercups and daisies. 'The Box' meanwhile is a latent flush of auspicious jangle pop and Morrissey-esque pronunciations. In theory it shouldn't work, or not to the infectious extent it does that has ensured Veronica Falls almost constant rotation on the office stereo since it landed on the doormat precisely one month ago.

For an album with no discernible weak links - we'll deduct a mark simply because half these songs were previously available - the final quarter is where Veronica Falls finds itself elevated alongside 2011's best. Imagine a stoic Buzzcocks or Sleater-Kinney had they been conceived and reared in suburban Britain and you have 'Wedding Day'. "You don't look at her the way you look at me," spits Clifford, "she'll never know the way it will be." As with pretty much everything here, it's over within three minutes yet at no point is the listener left in any doubt as to the narrator's intentions. Likewise the slightly more laid back 'Veronica Falls', the closest the band come to performing an outright ballad, once again lyrically ambiguous in its delivery from beginning to end ("You will never know the truth"). The raucous finale of 'Come On Over' complete with 'Paint It Black' style drum overtures and all brings the album to a close in the most climactic possible way. Rhyming "crimson and clover" with the title in nursery rhyme-like fashion while guitars twirl and collide like fireflies in the night sky ensures Veronica Falls departs in grandiose fashion.

In summary, Veronica Falls can be proud of their first long player, and rightly so. For not only have they demonstrated the art of devouring their influences to create the present with consummate ease, they've also reaffirmed the belief that classic songwriting and traditional four-piece guitar bands aren't necessarily relics of the past and with it, conjured up arguably the strongest debut album of 2011.