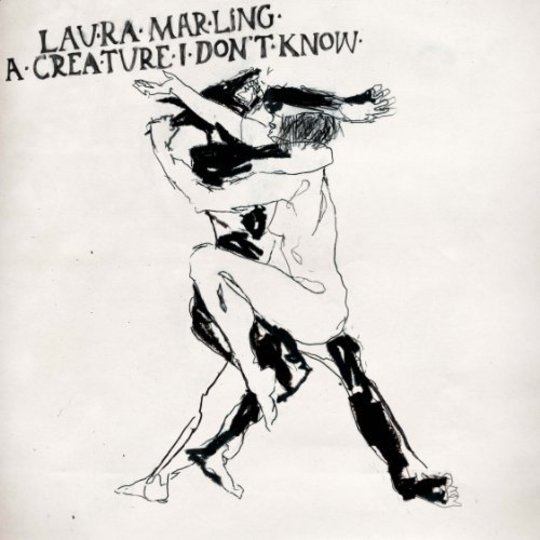 It's a difficult task, following up a runaway success such as Laura Marling's second album I Speak Because I Can. It's probably even more difficult when you're only 21 and already on your third album, with descriptors like 'furious talent' following you around. A Creature I Don't Know was always going to have a considerable amount of expectation heaped upon it.

It wouldn't be unreasonable to suggest that the stark contrast between two factors Marling cannot help - her age and her gender - and the two that matter - her voice and songwriting ability - might have previously played into a certain press-friendly marketing convenience. And true, when you've got an artist who steadfastly insists that her songs shouldn't be taken as a personal reflection at all, it's occasionally difficult to find other reference points without slipping into the cliched influences like Joni Mitchell or Bob Dylan. To put it bluntly then, A Creature I Don't Know is very much the sound of Marling setting out her stall once and for all, telling those factors to shove off and just pay attention to the songs.

Musically the album is as simple as it gets; several songs, particularly 'Night After Night' are simply Marling and a guitar with occasional flourishes of piano. The one notable exception is 'The Beast', with wall to wall electric guitar and certainly the most angry-sounding Marling song to date. In lesser hands, the simplicity of the arrangements might indicate a lack of ideas. Here, though, they belie a surefire confidence in the songs' abilities to stand up by themselves, without unnecessary flourishes.

The lyrics are nothing if not introspective. "Why can't I live and just be?/I'm full of guilt" Marling ponders on 'My Friends', answering her own question before she's even asked it. Elsewhere, 'Don't Ask Me Why' finds her offering words of knowing consolation towards "Those of you who are lost and low/I know how you feel/I know it's not right/But it's real". And 'Sophia' informs its listener that "Where I've been is no concern of yours", leaving us in no doubt that we're witnessing the birth of a new era of Marling, one who is stating her unwillingness to hold back and bite her tongue any longer.

Therein lies an issue though. Marling's lyrics are well beyond just about anything else being produced by any of her contemporaries. Ludicrously literary and filled with the search for that unquantifiable missing something, ironically it feels like there's something missing here, namely Marling's own willingness to completely expose her own 'beast'. In the reliance on characters to relay personal thoughts, even when there's evidently nowhere else to go but inwards, it feels almost like an academic exploration of the schism between the wants of the head and the needs of the heart, rather than a personal one. Of course, there exists the possibility of it all being a big double-bluff, of insisting it's the work of characters to disguise it genuinely being personal first and foremost. But there is something slightly frustrating about listening to a singer like Marling, with all her passion and thoughtfulness, seeming to slightly hide behind her creations.

But that's a personal niggle, really. For all I'd like Marling to fully come out of the shadows, to not hide her personal thoughts behind those of characters sometimes, there's still more feeling coming from her little finger than from the entire back catalogues of just about any other artist at her level. The album is bleak in many places, as it always will be looking at the darker recesses of the human condition, but demands a level of engagement most artists today simply don't know how to conjure. The only thing left to do is to pay full attention to the songs. Marling clearly won't have it any other way.