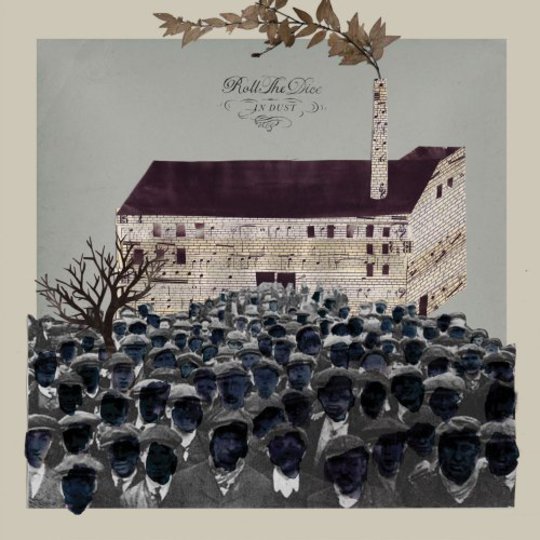 Vangelis has a lot to answer for. It’s not, however, how he prolonged the career of seagull-voiced Yes frontman Jon Anderson through their chart-harassing Jon and Vangelis collaboration of the early Eighties – that misdeed is balanced out by his role in unleashing the mighty Demis Roussos upon the world. No, Vangelis’s main, if unintentional sin, is the way in which his soundtrack for Blade Runner welded so perfectly to Ridley Scott’s futuristic visions that pulsing synth instrumentals are now forever tied to dark skyscrapers, to neon overload, to the listener racing through a city in perpetual motion, driven by intent and dogged by paranoia as both pursuer and pursued.

It’s near-impossible to listen to the new Roll the Dice album, In Dust, without such accompanying mental images of urban dystopia, a fact of which they themselves must be well aware. One half of the Stockholm duo is Malcolm Pardon, whose DeadMono production company’s achievements range from film and advert work to remixing Lykke Li; we’ll skirt tactfully past his co-writing credit on Ronan Keating’s less-than-memorable 2003 song ‘Turn It On Again’. The other is Peder Mannerfelt who, in his techno guise The Subliminal Kid, has also remixed Lykke Li as well as carrying out mixing work on Fever Ray’s album.

For them, Roll the Dice is a deliberate, monkish move away from commercial nous and studio luxuries towards self-imposed musical austerity: analogue equipment (a sonically if not financially restrained choice – have you seen the price of vintage gear these days?) and semi-improvised songs, the pair making themselves complete each one within a single session with a minimum of overdubs. With pulsing basslines, hazy synth washes and melodies that gradually emerge, blossom then fade with the turn of a filter dial, their self-titled 2010 debut album referenced 40 years of brooding waveform manipulation, from soundtracks by John Carpenter and the aforementioned Vangelis, to kosmische pastoralists Cluster, mid-Seventies Tangerine Dream and Steve Reich’s restless minimalism.

As the title hints, In Dust turns that template in a doomier direction. Press shots show Pardon and Mannerfelt dour-faced and coated in an unidentified dark-coloured muck, as though they were either nineteenth century treacle miners or sole survivors of an unspeakable incident involving someone pressing the wrong button in the cab of a festival toilet-emptying lorry. And opening track ‘Iron Bridge’ uncompromisingly sets the scene, with its haunted-warehouse clangs and growing toxic-cloud hiss. The arrival of a throbbing, octave-hopping bassline and synth froideur takes it unavoidably into Deckard-on-the-beat territory, yet ‘Iron Bridge’ muscles on through according to its own merciless, unknowable logic. 'Calling All Workers' paints an equally grim picture, its metallic sampled bell and dehumanised pulse suggesting a Metropolis-like world of downtrodden drones.

What follows is, for better or worse, in much the same vein. ‘Maelstrom’ builds up dense synth textures and needling synths, softened by a gently rocking piano motif. In contrast, ‘Dark Thirty’ leaves space around its dolorous clangs for wan rays of melody and a gently aquatic, almost Eno-esque pairing of piano and synth. By the time the stalking piano of ‘The Skull is Built into the Tool’ heralds further barren wastelands, however, Roll The Dice’s sonic asceticism starts to seem less like a bold challenge to the creative self and more like a handicap. Would the odd juicy LFO wobble or dalliance with a soft-synth mellotron really be such an indulgence, guys?

That said, what In Dust lacks in sonic breadth, it makes up for by bringing richness to its palette of oppressive mists and dread-filled shadows. With its jarring delay effects, ’The Suck’ comes on like something nasty caught on the CCTV of a walk-in freezer, whilst ‘Way Out’ goes for the oldie-but-goodie trick of disorientating out-of-phase rhythms. The crafty duo have a final trick up their sleeves, however, with the advent of an unexpectedly redemptive four-note synth line, a change of mood which continues with the closing track, ‘See You Monday’ in which pianos tumble fluidly and the synths almost hiccup with confusion at the prospect of a happy ending. Maybe somewhere under a Stockholm studio there’s a lead-lined box containing the director’s cut.