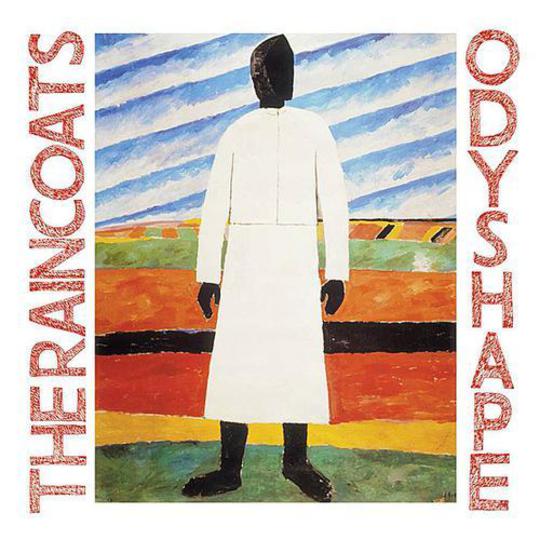 In a sense, Odyshape is a reissue of a reissue. It originally came out in 1981, when The Raincoats were absolutely front and centre of Rough Trade Records’ scene of collectivist/leftist/important washing-up rota postpunk bands. Later in the decade, the label went down the tubes and the band’s work fell out of print – until 1993, when Geffen reissued the three Raincoats albums in a game attempt to test the limits of what a Nirvana-obsessed world would buy (Kurt Cobain was a big fan of the band, and no I don’t blame you if you’re experiencing a certain ennui upon reading those words for the five hundredth time). Unlike a skinhead’s trousers, these too failed to stay pressed, but the band themselves – who still exist, in an informal kind of way, and are playing Jeff Mangum’s ATP weekend in December – have latterly set up their own label, We Three, to get their legacy back on the proverbial shelves.

You’ve had almost two years to snag their self-titled debut LP, but heck, you might want to go directly to Odyshape, which has been remastered but retains the ’93 sleevenotes penned by Kim Gordon. Admittedly, she doesn’t get round to mentioning the actual album, but her love of The Raincoats is clearly sincere, and one sentence in particular – 'They seemed like ordinary people playing extraordinary music' – is especially wise. There was no yardstick of ability in the band: Vicky Aspinall was a classically-trained violinist, but Gina Birch and Ana Da Silva were effectively self-taught, Birch herself saying that the stylistic shift between The Raincoats and Odyshape owed much to their developing skills. Not that they’d ever had more than a peripheral, scene-driven link to punk – as in the style of music – but pretty much all its traces had been cast aside by the time they started writing the nine songs on this album.

The results are far more prone to tangle with lithe dub reggae (‘Shouting Out Loud’, the opening track), awesomely witchy Nico-meets-gothic Britfolk incantations (‘Only Loved At Night’, which seems to predict all manner of great underground music from Helium to Espers) and batshit scratchy jazz poetry plinking that is more or less impossible to categorise but might be what The Red Krayola would have sounded like if they’d been The Slits (‘And Then It’s OK’, ‘Red Shoes’). You’d never call any of it ‘prog’, really, but the spirit of the commie beardos that comprised the Seventies Canterbury scene is being carried here nevertheless. Indeed, Robert Wyatt – previously of Soft Machine, later a solo artist who found a sympathetic home on Rough Trade – is one of the drummers on the album, along with Charles Hayward of This Heat.

Violin is brought to the fore, and new instruments ('smuggled' back from New York after their 1980 tour, says Birch) aren’t just added for show, they’re centrally important: Aspinall’s cello is effectively the lead instrument on ‘Dancing In My Head’, for example. It’s tempting, especially speaking as someone who was only a few months old when this album came out, to lionise the culture that spawned Odyshape: to suggest that it was sufficiently catholic and cosmopolitan to render anything possible. This would be pretty rose-tinted, given that The Raincoats couldn’t even find a permanent drummer during their existence, and that their label survived only by the skin of its teeth until they lucked out with The Smiths two years later – but listening to this album, you feel that nothing was off-limits in the creative process.

When Birch confesses, on the title track, “I’m not glamorous or polished / In fact I’m no ornament … I wonder if I’ll ever look right,” it seems less shameful or embarrassed than defiant. At this point, you realize, the notion of women being able to play in bands regardless of their perceived beauty was a fresh and novel one. The Raincoats play a significant role in the fact that a feminine/ist musical voice has remained in place for the following three decades – ordinary women playing extraordinary music, in fact.