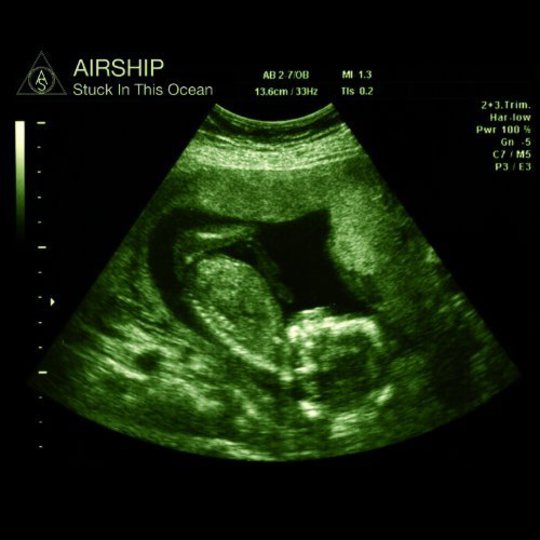 Hailing from a certain area of the north-west of England not unknown for its pop musical heritage, Airship recorded their early demos in Ian Curtis’ hometown of Macclesfield, but have since expressed a desire to distance themselves from Joy Division and the other bands from Manchester’s heyday.

Not really all that necessary when you think about it – while in the past the city may have suffered under the weight of its own hubris, these days there are enough exciting bands coming out of Manchester for people to forget about the myth-making of the Factory years.

Airship don’t sound like Joy Division, but then neither do they have the spirited subversiveness of bands like Wu Lyf and Egyptian Hip Hop, or the quirky brio of Everything Everything. Their press release promisingly mentions such disparate influences as Animal Collective, Wild Beasts and even Phil Spector, but this is shooting rather high – a better clue into their sound comes from the past work of their producers, Dan Austin (Doves) and Editors’ guitarist Chris Urbanowicz. And it’s the ploddingly 'epic' production that is part of the problem. Indeed, such is the stadium-friendly sheen of the band’s sound that, while listening to album opener ‘Algebra’, I initially misheard the lyric “put the cold blade in” as “put the Coldplay in”, perhaps subconsciously imagining a cynical tactic to shift units.

Songs like ‘Algebra’ and ‘Kids’ are pleasing enough slices of emotionally-charged commercial rock, with big fuzzy riffs and choruses that make a bold attempt at being anthemic. But one senses that, for all their radio-friendliness, Airship don’t really have the crossover potential, or even the inclination, to be the alt-rock Snow Patrol. Singer and guitarist Elliot Williams has said 'We’re always reading these reviews saying we write big anthems fit for stadiums, but I couldn’t think of anything worse'.

In fact, when they let go of this and play to their strengths, things become a lot more interesting. The ethereally gothic ‘Spirit Party’ channels the Pixies by way of Arcade Fire and is by far the highlight of the album. ‘Gold Watches’ starts off with Postal Service-style synths before progressing into a pulsingly mournful melody, with textures and harmonies that are uncharacteristically spare and subtle.

The members of Airship are still very young, and the more promising elements of this album hint at the possibility of something more exciting to come. But at the same time, it’s the band’s lack of youthful exuberance and spirit that make Stuck in This Ocean a slightly depressing listen. They've have expressed a kinship with American slacker bands like Pavement, but beyond all the riffs and feedback, it’s Pavement’s playfulness and sense of humour that make them such a refreshing listen.

It’s better to be a small fish in a big pond, I suppose, but with so much fresh and eclectic talent emerging from Manchester, Airship may be in danger of finding themselves stuck in an ocean they are unable to move beyond.