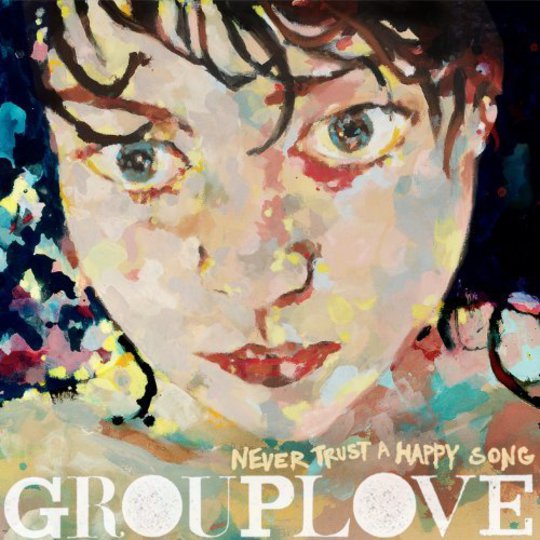 Wouldn’t it be nice if bands always lived up to their potential? Back in February, the UK got its first proper taste of Grouplove when they released their self-titled debut EP on these shores. And what an exciting set of six songs it was too, the way it gave Americana a shouty, slightly sloppy, slacker makeover. Most exciting was ‘Colours’, a big, boisterous anthem that beat its own snoozing bassline round the head with fistfuls of acoustic chords and cymbals. Grouplove arrived, with impeccable timing, as the American antidote to Mumford & Sons.

‘Colours’ has now found its way on to Never Trust A Happy Song, and nine months on it still sounds like an entire generation of sun-bleached surfers rising up to tell the world that they’ve got something to say. Unfortunately, that’s not how the rest of this album sounds. More often than not, Grouplove sound polished, preppy, and frankly a little dull.

They start solidly enough. ‘Itching On A Photograph’ is a great piece of folk-pop, from its sad little intro to the moment it slides sophisticatedly into its teary-eyed bounce of a chorus and becomes even more of a fist-pumping wail with every refrain. Okay, so it’s not the most ground-breaking piece of music, but it’ll make you feel a hell of a lot more summery than the English climate ever will.

However, as with most things, the secret is moderation. So while ‘Itching On A Photograph’ kept its upbeat rhythm in check with some agonising vocals from Christian Zucconi, ‘Tongue Tied’ shows no restraint whatsoever. Its bloated synth sounds like the soundtrack to an advert for some E number-riddled sweets written by Katy Perry, while the almost-rapping in the middle-eight sounds like a Pussycat Dolls pastiche. By the time you reach the acoustic cod-reggae of ‘Lovely Cup’, complete with its No Doubt-esque bubbly bassline, it’s pretty clear that Grouplove’s debut album isn’t exactly going to meet your expectations. The record truly troughs with ‘Chloe’, which unbelievably sounds like The Fratellis covering a particularly bad T Rex song.

These moments don’t define Never Trust A Happy Song though (especially not the latter, which sticks out precisely because it seems to have nothing to do with the rest of the album). Far more representative are songs like ‘Spun’, which isn’t particularly bad, but with little more than a couple of plain patterns of major chords and some slightly stomach-churning backing vocals, there’s not much you can say in its favour either.

There is hope for Grouplove though – the languid vibe and winding lyrics of ‘Betty’s A Bombshell’ are fairly mesmerising, ‘Love Will Save Your Soul’ has a sweet goofiness to it and the fiery closing track ‘Close Your Eyes And Count To Ten’ reaches a blissful vitality at its climax. Taken on their own, these moments undoubtedly remind you how exciting Grouplove seemed when ‘Colours’ first sprung out of your speakers. Unfortunately, they are lost in an album where many of the most memorable tracks are ill-thought-out genre studies that might have been fun to mess around with in the studio, but don’t warrant repeat listens. Somewhere in Never Trust A Happy Song are the fragments of a great band, but sadly they aren’t enough to make a great album.