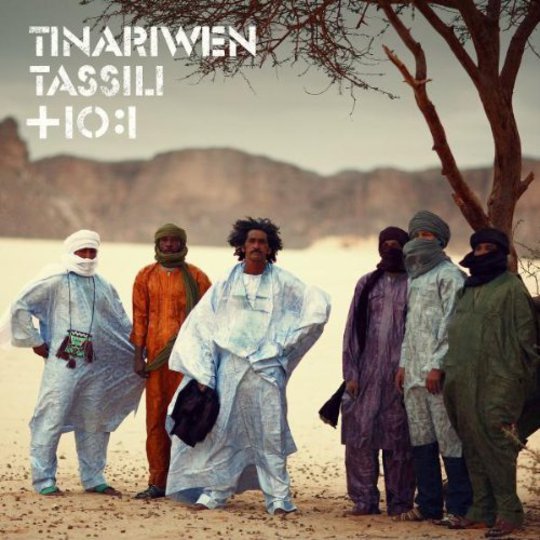 Much has changed for the band of Tuareg musicians known as Tinariwen over the past few years. Their status has gradually risen outside of their home in the Sahara Desert region of northern Mali, largely thanks to a series of releases (particularly the albums Aman Iman and Imidiwan) and lavish praise heaped on them by the likes of Brian Eno, Thom Yorke, and Carlos Santana. But there have also been important changes in style and circumstance. On Tassili they’ve ditched the electric guitar and recorded an album of mostly acoustic sounds, which have partly been shaped by famous collaborators from overseas. Tumult in the region forced the band to leave their base in Tessalit, causing them to travel to a space near Djanet in southern Algeria where they recorded this album in a tent in the desert at the end of 2010. Not many bands have to deal with getting sand in their equipment during recording sessions. But not many bands possess the same blend of tenacity and inspiration as Tinariwen.

The tools at their disposal may be slightly different, but there’s no mistaking this as a Tinariwen album as the opening ‘Imidiwan Ma Tenam’ begins. Nels Cline from Wilco adds some atmospheric guitar noise in the background, but the delicately woven melodies and subtle combination of handclaps and acoustic percussion will feel familiar to anyone who has spent time with this outfit before. The lyrics, when translated into English, address the problems the band have witnessed around them (“What have you got to say my friends/about this painful time we’re living through”) and are spun in the same kind of quiet, folksy way that much of their wordplay is delivered. Everything feels like it was closely miced up, lending an intimate campfire feel that runs throughout Tassili.

Cline’s work was added in post-production, but Kyp Malone and Tunde Adebimpe of TV on the Radio actually made it out to the makeshift recording base. Their contributions to ‘Tenere Taghim Tossan’ amount to little more than a few twists of heavily falsettoed vocal interjections in the mix, which are subtly deployed and help one of the more strident tracks build to a neat crescendo. Fortunately none of the guest players intervene too heavily—even the work of the Dirty Dozen Brass Band on ‘Ya Messinagh’ is deferentially underplayed to fit in with the inconspicuous nature of the recording. Those additional contributions are all dispensed with early on the album, but everything is so carefully intertwined with the core Tinariwen aesthetic that it barely feels as lopsided as it should. Perhaps it’s because they’ve played together so long — the roots of the group date back to the late Seventies — that they’ve become such expert editors of their own work.

Set free from their collaborators, Tinariwen mostly continue on the same path. ‘Tameyawt’ is all quiet plucking and hushed reminisces on a resident of the town of Timyawin on the Algeria-Mali border, while ‘Tamiditin Tan Ufrawan’ trades off a slow-burning groove and then keeps everything on an even keel as warm chant-along vocal passages gently nudge the track to its conclusion. Occasionally it’s easy to miss some of the affectations of past Tinariwen recordings, particularly the female throat singers who so often added a touch of drama to proceedings. But the whole idea here is to take everything down a notch, to get immersed in the tightly wound acoustics of ‘Djeredjere’ or the warmth asserted by the swelling group vocals of ‘Iswegh Attay’. It’s the sound of a band completely at ease with themselves despite hostile surroundings, where music becomes both a document of life and a means to ease away from its greatest challenges for a little while.