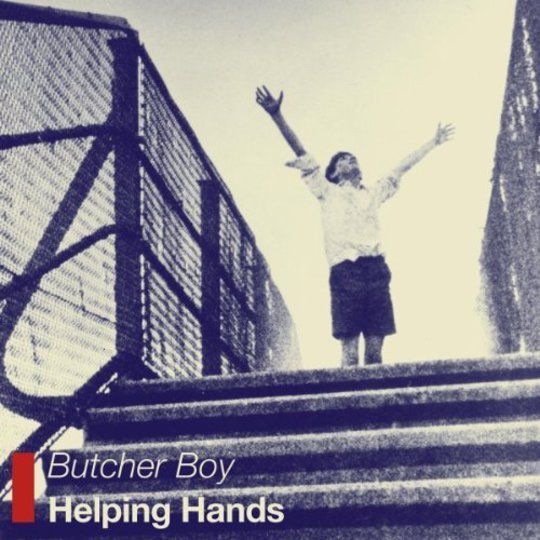 The Glasgow-twee shop clique might have sauntered out of town when Stuart David and Isobel left B&S but the vibe lives on, albeit just, in the likes of Butcher Boy.

But this isn’t simply a rehashing of fey-pop history. Rather than tales of school yards and sunshine, frontman John Hunt offers a more realistic world view. As ‘The Day Our Voices Break’ kicks in, reverb-drenched chords are met with a tango rhythm and Hunt’s downbeat poetry.

Following low-key opener of ‘J is for Jamie’, ‘The Day…’ is a dour lament on long distance/failing relationships and the grubby realities of living alone.

While Hunt might lack the whimsical edge of his influences, his lyrics are charming without straying too close to the twee traditions of broken hearts and bashful attempts to woo bookish women, even though at times it does feel too much importance has been placed on each line.

Lead single ‘Imperial’ doesn’t have this problem – powered by a Roland CR-78 drum machine it manages to capture the spirit of Scotland’s second city, evoking Belle & Sebastian and Edwin Collins in equal measure.

‘Your Cousins and I’ is a gleeful romp a la late '90s Jeepster – treble heavy riffs are underpinned by a wandering bassline creating the best Murdoch pastiche on the record.

The seven-piece manage to combine twee-sensibilities with an underlying sense of sadness, helped on by Maya Burman’s cello. The loping strings create a sense of sorrow rarely betrayed by Hunt’s vocals.

But it’s not all celebration and emulation. The weakest moments here come when the pace drops – ‘Bluebells’ is pleasant enough but pleasant shouldn’t be an artistic goal, especially when laid next to the likes of ‘Imperial’s alt. pop sensibilities.

‘Whistle and I’ll Come to You’ is a mid-paced plod laid heavy with sugary sentiments and is the only example of the delivery truly failing.

But while at times it might reek of emulation, Helping Hands is immensely enjoyable. Hunt and co manage to balance flippancy and frivolity in equal measure without coming close to invoking anyone’s gag reflex. While the instrumentals won’t have anyone reaching for the needle/rewind button, they punctuate the record perfectly and bridge the gap between the fast and fun and, well, the more sluggish moments.

Helping Hands is Butcher Boy's first record on Damaged Goods and their first after parting ways with How Does It Feel To Be Loved? It’s probably not going to set anyone’s world alight but _Helping Hands_ is a record more charming than irritating and more importantly one that improves with each listening. This is Butcher Boy’s finest hour to date, but by the signs of it the best is yet to come.