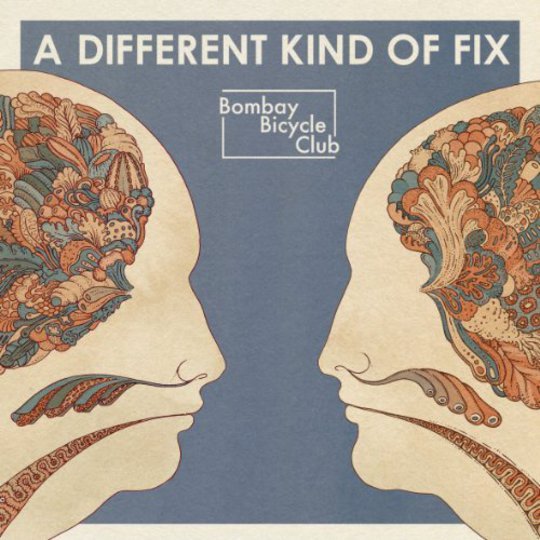 Such is Bombay Bicycle Club’s genteel rise to prominence, A Different Kind Of Fix virtually comes pre-packaged with its own hackneyed review. ‘After the awkward swagger of their debut and a sidestep of burgeoning maturity in Flaws, this North London four-piece have finally scaled the heights they always threatened to,’ reads the imaginary assessment. Disappointingly, reality falls some way short of such an appraisal.

A Different Kind Of Fix is an evolution of baby steps for Bombay Bicycle Club and one which will leave you wondering if Jack Steadman and co are ever going to burst into full bloom. While it’s commendable that this still youthful collective have churned out three albums in three years, that grand total is much less impressive when viewed out of context. Standing at the same point in their respective career arcs, Franz Ferdinand, Bloc Party and The Horrors have already written an essential account of themselves. Hell, if we’re playing ‘British Indie Band Top Trumps’, then Foals, Friendly Fires and The Maccabees may well come out on top, even with a slender two LPs to their names.

Culled from its birthplace on The Twilight Saga: Eclipse soundtrack, opener ‘How Can You Swallow So Much Sleep’ is a promising start. Having mutated from its guitar-centric origins with the aid of an off-beat keyboard glitch, it hints at a band ready to raise their heads above the meek, Smiths-indebted trench they have thus far operated in. Needless to say, there’s little else like it on the rest of the album.

‘Your Eyes’ is a more typical cut, marking out a relaxed, groove-heavy sound that’s no longer intent on wringing as much tension as possible before the chorus hits. Sometimes, as with the slinking funk of ‘Lights Out, Words Gone’, this restrained attitude works. On the likes of ‘What You Want’ and ‘Favourite Day’, it comes across as an aimless attempt to push an unready outfit forward.

Lead single ‘Shuffle’ is the best instance of all these tentative stretches in the direction of progression intertwining in truly memorable fashion. “Once you get the feeling it wants you back for more,” croons a fragile Steadman in full-on quivering frontman mode. “Says it’s gonna heal you but you won’t make the call.” ‘Beggars’ and ‘Leave It’ are also decent enough to make you wonder what A Different Kind Of Fix might have been if a tad more time or confidence had been invested in it. Both straddle a tidy divide between quiet reflection and reverberating crescendos of anguish which simply isn’t explored enough across the rest of the record.

It’s hard to put the boot too far into Bombay Bicycle Club. For all their imperfections they’re still an extremely listenable band, well-honed in the art of smattering their quite good albums with a handful of quite brilliant tunes. Time is running out however, for them to prove that they’ll amount to much more than this. It would be a crying shame if they didn’t.